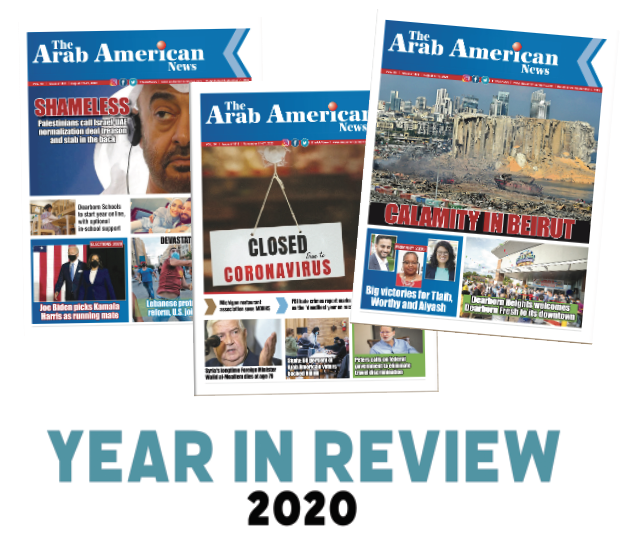 The following is a year in review for the top local news that we covered in 2020. Despite deaths and COVID, Arab Americans make advances in public life.

The NFL’s San Francisco 49ers were led by one of Dearborn’s own in their contest against superstar quarterback Patrick Mahomes and the Kansas City Chiefs, as rising star coach Robert Saleh will take the field in hopes of winning his second Super Bowl title as an assistant.

Saleh, a Lebanese American who made history as the first person of Arab American descent to serve as a coordinator for a Super Bowl team, said he loves football because of its universal appeal, which has taken root in the Arab American community over the past few decades.

Benson appoints Zaineb A. Hussein as deputy chief of staff

Secretary of State Jocelyn Benson announced that Zaineb A. Hussein will serve as Michigan Department of State deputy chief of staff starting Feb. 10.

“Zaineb brings a combination of government, policy and engagement experience and insight that will serve our team tremendously,” Benson said. “She has exceptional knowledge of how to work with people to advance common agendas, which will benefit the department’s employees and the many customers and communities we interact with across the state.”

Nationally known Iraqi American hair stylist Bashar Kallabat was found dead in a hotel room at the JZ Motel on Eight Mile Road in Detroit on Tuesday night. Detroit Police say a 24-year-old man they believe Kallabat met on a dating site has been arrested.

Kallabat, 56, died from blunt force trauma to the head. Police said there were signs of a struggle in the room. A motel worker found Kallabat’s body after noticing the door to the hotel room was wide open. The 24-year-old suspect worked for a security company and his uniform was used to track him down.

Gov. Whitmer, the Michigan Department of Health and Human Services (MDHHS), the Oakland County Health Division and Wayne County Health Department announced that two Michigan residents tested presumptive positive for coronavirus disease 2019 (COVID-19), the first confirmed cases in the state. The governor has declared a state of emergency to maximize efforts and assist local governments and officials to slow the spread of the virus.

This resulted in a statewide shutdown that lasted for almost two months and has resulted in more than 549,000 confirmed cases and more than 13,000 deaths. In mid December, a COVID vaccine arrived and was quickly distributed to healthcare workers.

Dearborn Mayor Jack O’Reilly announced on Facebook that he and his wife were dealing with the coronavirus and the city’s many residents were happy to hear that they had recovered from the terrible virus, safe and strong.

Wayne County Sheriff Benny Napoleon lost his battle with COVID-19 on Dec. 17. He was 65. Napoleon had been on a ventilator since late November. Dearborn Heights Mayor Daniel Paletko lost his battle on Dec. 29, just eight days after turning 70. State Rep. Isaac Robinson died on March 29 at 44-years-old.

By a 3-2 vote, the City Council removed member Ian Perrotta from his position as mayor pro tem. Following the vote, Councilman Fadel Al-Marsoumi was appointed the city’s new pro tem. This came shortly after the Council had voted on a resolution to condemn and censure comments Perrotta made against a city employee in June when his petition to construct two outdoor pavilions for Trixie’s, the bar he owns in Hamtramck, had been denied.

After being silenced at a School Board meeting, some district parents held a protest outside of the District 7 Board of Education building Thursday morning.

Leslie Windless, who organized the protest, said that Black students and parents need to have their voices heard.

“You can’t say there’s a zero tolerance policy when kids are not suspended or reprimanded for making these comments,” she told The Arab American News prior to the protest. “They are trying to silence this parent and they refuse to address the whole problem.”

Accountability For Dearborn (A4D) has turned to the City Council to address racial segregation in Dearborn while also releasing police records for the last decade.

Having submitted a Freedom Of Information Act (FOIA) request, A4D announced that it had finally received the information it had requested regarding citations and arrests disaggregated by racial demographics.

After seven years on the City Council, Council President Susan Dabaja has announced her candidacy for mayor.

Dabaja is a lifelong Dearborn resident born to immigrant parents in Dearborn’s Southend.

Since 2014, Dabaja has been involved with some of the city’s most important decisions and helped navigate it through some of the most trying times, including the current ongoing pandemic.

Dabaja is also a practicing attorney and mother of three. If elected, she will be the first new mayor in 14 years.

Adel Mozip, Irene Watts, Pat D’Ambrosio and Mary Petlichkoff were elected to the Dearborn School Board. In Dearborn Heights’ D7 district, incumbent Mandy Diroff and newcomers Latanya Gater, Nathaniel Cann and Derek Wall were elected. Dearborn Heights’ Crestwood School District had a rough year. After appointing Najah Jannoun to the board in August, Board President Donna Ancinec passed away in late October. With the election of Sue Kaminsky and newcomer Mo Sabbagh, the board appointed Danielle Elzayat to the vacant seat, making the board primarily Arab American.

Aiyash ran unopposed for Michigan’s House of Representative Fourth District after the death of State Rep. Isaac Robinson (D-Detroit) from COVID-19 in March.

Brothers Mohamad and Ali Bydon were guests of honor at a packed dinner celebration on Saturday, Feb. 15, where members of Michigan’s Arab American community gathered to acknowledge recent remarkable medical achievements by two of their own.

Both brothers have made significant achievements in their fields. Mohamad is professor of neurological surgery at the Mayo Clinic, while Ali is professor of neurosurgery at Johns Hopkins. Mohamad recently made history and received international acclaim by performing an experimental stem cell procedure that helped a paralyzed man walk again. Ali is a respected researcher and has presented his work internationally. He is one of the busiest neurosurgeons at Johns Hopkins Hospital and has been for the past decade.

With the amount of violent crimes increasing, Mohamed Ali Saad of Dearborn Heights was caught in Tennessee and arrested after police say he allegedly slit his mother’s, Fatme Saad, throat and stabbed her to death. A family member reported that Fatme Saad and her husband were watching television when Mohamed called her down to the basement, where he killed her before leaving the house. Her husband found her a short time later and Mohamed Saad was on the run for two days before being caught.

Dearborn resident Balkees Sadek was found dead in her bathtub on April 6 and Hassan Asaad Alwaily was arrested on April 8.

The Wayne County Medical Examiner determined the cause of death to be “strangulation and drowning” after a toxicology report came back negative for all drugs.

Sadek was 29. She was divorced and is survived by two daughters. The case is still pending in Wayne County Third Circuit Court as Alwaily remains in custody.