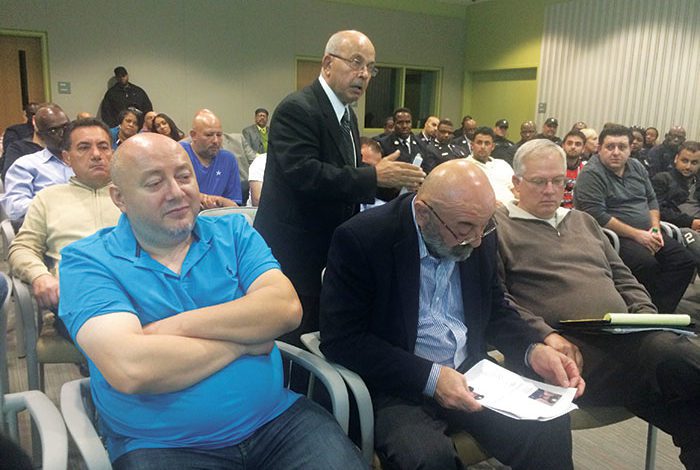 Addressing gas station owners and city officials during a meeting at the Detroit  Public Safety Headquarters on Wednesday, Craig said within the past seven months only five gas stations have participated in Project Lighthouse.
“That is not acceptable,” he said.
The Detroit Police Department is specifically focusing on businesses— such as gas stations— that are open late at night or 24/7 for the initiative, because they are where people generally turn when they have emergencies.  Project Lighthouse is designed to keep Detroiters and visitors safe in the event of a late night emergency such as a car breakdown. All businesses that participate in the program place a sticker on a window and bright green light outside.
“I think it is most important that we support you in becoming green light businesses because we know and recognize how good it is for our neighborhoods,” Craig said.
Project Lighthouse is designed to discourage criminal activity. It provides shelter, telephone use, bathroom use, safety information and police assistance through police officers.
Businesses are selected for the initiative for reasons such as being clean, having security cameras and willingness to work with police.
Nasser Baydoun, a member of the Tri-County Business Committee who helped organize the event, encouraged gas station owners to take advantage of a funding program DTE offers to help businesses cover the lighting expenses.
“My concern is this is a privilege,” Craig said. “We are not going to just give green lights…We want a certain criteria. We want to know that the gas stations are clean.”
Representatives from Detroit 7-Eleven stores and McDonald restaurants were also present and are joining the initiative.
The meeting was organized by the Tri-County Business Committee.
“We want to work with you and make sure everyone participates in the green light initiative and help move the city forward,” said Shaker Aoun, chairman of the committee.
Issues regarding neighborhood policing, licensing and fees were also discussed during the meeting.
Craig told The Arab American News that the Police Department doesn’t want to deal with licensing issues and that the issue should be handled by the Detroit Buildings, Safety Engineering & Environmental Department.
“I don’t want us writing tickets,” he said.
Last month, a meeting took place between Detroit gas station owners and Detroit Police Commander Todd Bettison to discuss licensing issues. Gas stations owners complained about receiving tickets related to licensing issues for the same reasons multiple times.
Business owners say they are getting ticketed for not having a business license. Even after they pay the ticket, they get ticketed again, because they are still waiting for city inspectors to show up at their stations and check everything before the process is complete.
These business owners say they often wait a long time for inspectors to show up and that they have no control over when an inspector arrives. In some cases, it takes the city months to send business licenses back to owners who applied for them.
During the meeting last month, one gas station owner complained about receiving six tickets by a police officer in one day for licensing issues at his business and then six more at his home only a week later for the same offenses.
“I can’t speak about something that I don’t know about,” Craig said when asked about those issues.
Craig said a moratorium is being placed on issuing licensing tickets to gas station owners.
“Going forward, we need to put a mechanism in place that anyone who gets a ticket from this point forward by our people we pull it,” Craig said.
By Natasha Dado