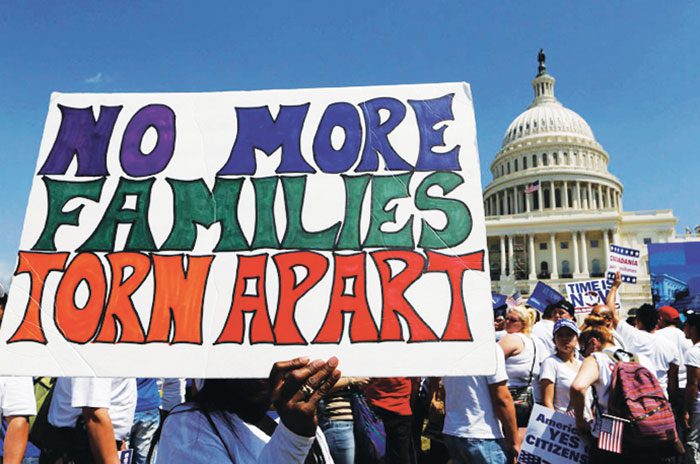 With the stroke of his pen, President Obama took historic steps last week toward fixing the country’s broken immigration system. The actions will provide relief to millions of undocumented individuals who currently reside in the United States, and extinguish their liminal legal and existential status.  The actions will become material, and benefits will be offered to the individuals within the next 90 days.
As the country’s largest Arab American civil rights organization, the American-Arab Anti-Discrimination Committee (ADC) has worked tirelessly to bring about progressive immigration reform.  ADC, along with a broad coalition of community and partner organizations, assert their support for the actions taken by the administration.
Simultaneously, we continue to call on Congress and the administration to adopt a sustainable immigration policy that ensures dignity to immigrant families, and eliminates draconian enforcement and border policing tactics.
While the president’s actions were a stride forward, the long march toward permanently fixing the immigration system is still incomplete, and moves onward.
Yet, the president’s actions provide tremendous forward momentum.  To understand the legal contours and significance of the president’s Actions, it is preliminarily vital to know what they are not.  The actions provide temporary, not permanent relief. Furthermore, the actions do not provide a direct pathway toward citizenship.  Finally, the benefits will not extend to undocumented individuals who have been convicted of violent crimes.
What the actions do provide is for temporary protection from deportation for millions of individuals.  According to a statement from the White House, “These executive actions crack down on illegal immigration at the border, prioritize deporting felons not families, and require certain undocumented immigrants to pass a criminal background check and pay their fair share of taxes as they register to temporarily stay in the U.S. without fear of deportation.”
The number of detentions and deportations has proliferated under the current administration.  Half of those detained and deported have no criminal record, many have only minor offenses, and tens of thousands have family members with U.S. citizenship or legal resident status.
Although the policy does not provide complete and permanent status to undocumented individuals, it provides undocumented immigrants with the opportunity to come out of the shadows, lift themselves from society’s fringes, and carry forward a life without fear of deportation.  In addition, the reform affords them with the legal authorization to procure employment, provide for their families, and start anew.
Why sign an executive order
The debate on immigration reform has been heated for well over a decade.  In 2013, the U.S. Senate passed a bipartisan immigration bill, which was killed in the House of Representatives.  The current gridlock and the failure of Congress to pass a bill, led President Obama to take action.
Many presidents before Obama, including Presidents Reagan, George H.W. Bush, and George W. Bush, all took executive action on immigration.  Indeed, the argument that President Obama’s actions were unprecedented is both myth and misrepresentation. The first President Bush used executive authority to allow family members of immigrants who were getting legalized through the Reagan amnesty to apply for protection from deportation, covering about 1.4 million people — 40 percent of the unauthorized population at the time.
Obama’s executive order can be overturned by the next administration in 2016, however this is highly unlikely and almost rarely does it happen. In his order the President did not change any laws. Under his directive he changed the enforcement priorities of the Department of Homeland Security (DHS) — which constitutionally he is permitted to do.
Who Benefits?
The executive actions taken by President Obama will bring temporary relief to millions of individuals who are currently deemed removable.  The relief will extend to both adults and children who are facing administrative or imminent deportation from the U.S.
Through the order the priorities of Immigration and Customs Enforcement (ICE) have been redefined.  ICE agents will now focus on individuals who have crossed the border unlawfully after January 1.  ICE agents will also focus on removing convicted criminals, along with suspected terrorists and potential threat’s to national security.
The key component of the action centers on the relief provided for undocumented immigrants who, as stated earlier, pass a criminal background check and pay their fair share of taxes as they register to temporarily stay in the U.S. without fear of deportation.
The action will also expand the Deferred Action for Childhood Arrivals (DACA) program and provide benefits to the parents of children who have received benefits through DACA. The action will also extend Deferred Action to parents of U.S. citizens and lawful permanent residents.
Estimates are that nearly 5 million individuals will benefit directly from the Actions taken by President Obama, while millions of their family members will benefit derivatively.
ADC calls on Congress to pass comprehensive immigration reform. A permanent fix is only possible through Congress. ADC will continue to advocate for immigration reform. If you, or a family member, have questions about the executive actions announced by President Obama, please call the ADC Legal Department at 202-244-2990 for more information. You can also send an email to legal@adc.org.
-Abed Ayoub is the legal director of ADC
By Abed Ayoub