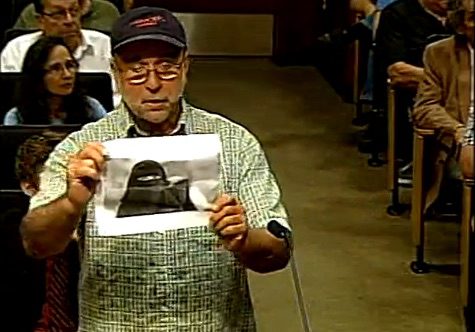 STERLING HEIGHTS – Residents came out in droves to a city planning commission meeting on Thursday, Aug. 13,
and to a city council meeting on Tuesday, Aug. 18, to protest a proposed 20,500 square-foot mosque on 15 mile and Ryan Road.

The American Islamic Community Center (AICC), already established in Madison Heights, petitioned the city of Sterling Heights for the property at 4935 15 Mile Road.

Residents appeared ruffled after learning about the project in the quiet residential area, a plan that has been in the works
for close to a year.

The city is already home to two mosques, including the American Muslim Diversity Association (AMDA), located at 4760 Ryan Road.

The city planning commission meeting ran hours over schedule earlier this month after residents expressed their fears and resistance in allowing another mosque to be built in Sterling Heights.

Jeff Chehab, a board member of the proposed mosque and of the American Islamic Community Center in Madison Heights, attended the meeting.

According to Chehab, 10 out of 12 members of the new mosque are Sterling Heights residents who were looking to establish a center in their city. He said the mosque will cater to about 100 members during Friday prayers and during the holy month of Ramadan.

“We just want a mosque in our city to call our own,” Chehab said. “We don’t plan on being a nuisance to any residents and
we are very well financed.”

The city’s Muslim population is smaller compared to other areas in metro Detroit. In recent years, Sterling Heights has seen a booming Chaldean and Jewish community dominate its business districts and neighborhoods.

Despite Chehab’s calm approach at the city planning commission meeting, residents took the podium to address concerns about the center.

While many citizens did raise strong points about zoning issues the place of worship could bring to their neighborhood, the shocking number of residents who expressed their bigoted views overshadowed them.

From suspecting that it is funded by international terrorist organizations, to raising concerns that it would lower property
values in the neighborhoods, one by one residents took their turn to lash out radical comment to city leaders.

Chaldean residents had a heavy presence at the two meetings, sharing their dissatisfaction towards the proposed mosque.

“This is not hate,” said resident Hana Aboona. “Take your mosque and go somewhere else; we don’t want you there.”

She added that she would move out of the city if plans were to go forward.

Other members of the mosque were also present. Local resident Fatima Ali-Ahmed took the podium after residents expressed concerns that their property values would be negatively impacted.

“Everyone is worried about their house values going down,” Ali-Ahmed said. “I can assure you that if anyone wants to sell their house because the mosques are getting closer, I would love to buy it.”

The mayhem continued the following week at the city council meeting, where more residents turned out to address the city council and Mayor Michael C. Taylor, hoping to put a halt to the plans.

A video of the city council meeting began circulating on YouTube just days later. The meeting included comments from Chaldean and White residents who strongly opposed a new center being built on 15 Mile road.

“I wish they’d go to Dearborn or somewhere else, just not this area,” resident Saad Antoun told city officials. “I don’t want to be near people like this. This is not humanity. My point is that it’s not right to live with people like this…this is not acceptable at all. These people…they are scaring the public.”

Antoun proceeded to hold a picture of a woman in a burqa and suggested that city officials outlaw it in Sterling Heights. He said he tends to see local residents wearing them at the malls and grocery stores and called it “scary and disgusting.”

Many residents feared giving their names and addresses during both public meetings, stating that they didn’t want to jeopardize their family’s safety.

One local woman questioned whether the proposed mosque would have a name and sign to identify it, stating that “the other mosque on Ryan Road” didn’t have one. However, a simple Google search would reveal the name of that mosque
(AMDA).

Resident Matt Wood echoed those sentiments, stating that the city has become dominated with restaurants and hookah bars that have signage in “a different language.” He suspects that constant gambling occurs in those establishments behind closed doors.

“If and when it is built, I would ask the city put in the proper policing and ordinances,” Wood said. “People are scared; you as lawmakers, you as the people of the city in leadership positions, need to make sure we police and monitor every citizen, not just laws that allow religious freedoms to take place.”

A Middle Eastern man with an accent, who strongly opposed the mosque and identified himself as “George John”, displayed the most shocking comment of all.

He questioned how the leaders of the mosque would be able to raise enough money to build an institution, stating that “all Muslims who live in America are on food stamps. They are killers.”

A local resident named Xena, who refused to give her last name out of “fear”, was present at both the city council and city planning commission meetings. She displayed her persistency in her stance against the mosque, criticizing city officials for not reaching out to residents in time to inform them of the plans. Residents claim they were alerted through a postcard that
was sent to homes in the neighborhood.

She warned residents that the mosque would be used for more than just Friday prayers, adding that it could be a nuisance to the neighborhood.

“I find the bigotry, hatred and ignorance on display both tonight and last Thursday to be harmful to the reputation of our city,” Radtke said. “The Sterling Heights I know is a welcoming and tolerant place and these people and their views are not reflective of the city population at large, who believe and follow the U.S. constitution. This is a house of worship for residents of our city and nothing else. I find it despicable that citizens of the United States are being discriminated against.”

After the video circulated online, the local Arab and Muslim community weighed in on social media, appearing unsettled over residents’ comments during the two meetings.

“It is so sad to hear this from the Chaldean residents,” said one Facebook user. “I don’t really care too much about the White
community because they lived here all their lives and have their assumptions; but to have someone that came from the same place as you speak like that just hurts to the bone.”

Sterling Heights residents who are in favor of the mosque have begun to rally residents to appear at the city’s next planning commission meeting being held at 7 p.m., Sept. 10 at 40555 Utica Road, where the city will either pass or deny the proposal.

The Council on American Islamic Relations of Michigan (CAIR-MI) issued a statement on Thursday, recalling similar resistance in previous years from Chaldean residents who opposed building the city’s first mosque, the AMDA.

“The blatant anti-Muslim comments as well as statements warning of property values dropping relating to the proposed mosque in Sterling Heights reeks of hate,” said CAIR-MI Executive Director Dawud Walid. “Chaldean community leaders must address the alarming amount of Islamophobia in Metro Detroit which continues to expressed by its members.”

The YouTube video that circulated online censored the faces and identity of the citizens who spoke at the city council meeting. It can be viewed at //bit.ly/1KLjQTV

To view the full city council meeting uncensored, the city’s official
website has it available at  //bit.ly/1EUG83w