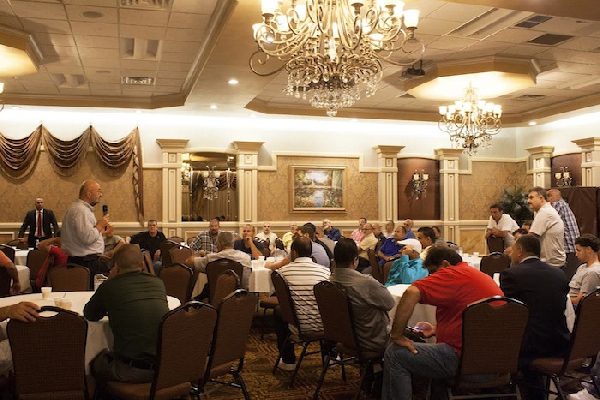 DEARBORN — More than 50 Detroit business owners, representing about 100 gas stations, decided to join a coalition to aggregate their efforts against what they consider unfair treatment by the city.
At a meeting at Byblos Banquet Hall on Monday, Aug. 31, the businessmen stressed the importance of working together under one umbrella to tackle legal and municipal challenges.
Gas station owners have been complaining of excessive ticketing, disrespect by the police, hefty fees and poor services in Detroit. They say Mayor Mike Duggan’s administration is unjustifiably scrutinizing small stores at a time when dangerous crime is ravaging the city.
Arab and Chaldean Americans own about 300 gas stations in Detroit that pay an estimate of $50 million in taxes and fees each year.
The coalition will be under the Tri-County Business Committee. It will advocate on behalf of businesses, wage legal battles and lobby local politicians to ease regulations and halt ticketing.
Shaker Aoun, chairman of the Tri-County Business Committee, said he is constantly hearing about cases of harassment and discrimination against gas station owners by Detroit Police.
“We are getting pressured by the city,” he said. “We are getting so much pressure from the cops, from the inspectors, from the tax people, from the fire department. We have to organize ourselves because we have no choice but to be together.”
He said business owners have been challenging tickets in the district courts, which he described as a madhouse. He added that going to court is not always effective, because not all unfair citations get dismissed and the businessmen still have to waste their time and pay legal fees.
Osama Siblani, publisher of The Arab American News, urged business owners to stick to Detroit and unite their efforts for their common cause.
“The biggest mistake we can make is to leave Detroit because Detroit is coming back,” Siblani told the crowd. “We paid a heavy price to hold the fort. When everybody left Detroit, we stayed in Detroit. Our kids were killed. We were injured. We were robbed, but we stayed in Detroit. For us to leave right now defeated, shame on us.”
Siblani added that only powerful people can protect their interests in the business world, while the weak and divided lose. He advised the businessmen to form an organization and sacrifice time and money to safeguard their investments.
He mentioned the Arab American Pharmacists Association as a success story of professionals working for mutual goals under one banner. He said the pharmacists’ combined buying power has made them respected decision-makers in the industry.
Helal Farhat echoed Siblani’s comment on the need for cooperation in the Detroit business community.
“There is clear systemic— I don’t want to call it discrimination— but definitely targeting of Arab American business owners and businesses,” said Farhat, an attorney.
He recalled walking into a courtroom where everybody was challenging ordinance violation tickets. “Every single one in that courtroom was either Arab American or Chaldean American.”
Farhat said one of the main issues is that the city is making business owners pay licensing fees from previous years, even if the gas station did not belong to the current owner during that time.
“They make you pay two or three or even four years back to obtain the C of O (certificate of occupation) or the fire marshal licenses,” he said. “That’s illegal.”
Several business owners complained of the hefty fire license fees, which could be up to $1,500 a year.
“They don’t respect us,” Farhat said of city officials. “Until we all get together, hold hands, unite, say we’re going to do something and actually do something, they will not respect us.”
However, Farhat reminded gas station owners to conduct business within the letter of the law, not to invite the unwanted attention of the police.
“This is a double-edged sword and a mutual obligation,” he said. “You can’t go out there and sell the crack pipes and loosies [individual cigarettes] and have the station dirty as heck. You have to fulfill your obligations in order for us to go and fight with a straight face and integrity.”
He added that uniting under a coalition would help businesses become familiar with and comply with the law.
Nabih Ayad, the chairman of the Arab American Civil Rights League (ACRL), blamed Duggan for the crackdown on small businesses.
“The city of Detroit doesn’t give a sh*t about you,” he said. “They don’t care about you… Yet you are the individuals that kept the lights on, that kept the taxes on, going into business every day, driving into the city of Detroit, the murder capital of the world. You guys were there. You weathered the storm for many decades.”
Ayad repeated that uniting and organizing is vital for gas stations. He outlined a carrot-and-stick strategy to face the challenges.
“Justice is not given,” he said. “You have to take it. You have to join forces.”
He said the struggle can be waged on two fronts— political and legal. He explained that the task force for Detroit gas stations can lobby local politicians, using dialogue and political backing. At the same time, it can sue the city for illegal treatment and get the Department of Justice to look into discriminatory practices.
Ayad said there is a perception in the city that Arab businesses are easy targets for making money from citations and that the crackdown is institutionalized “from the top all the way down.”
At the end of the meeting, several attendees voiced frustration that complaints and assemblies are not leading to anything tangible on the ground. A debate arose on whether contributing money should be required to be a part the business committee.
Tri-County Business Committee Chairman Aoun promised to get membership applications to all present business owners after procuring their contact information.
By Ali Harb