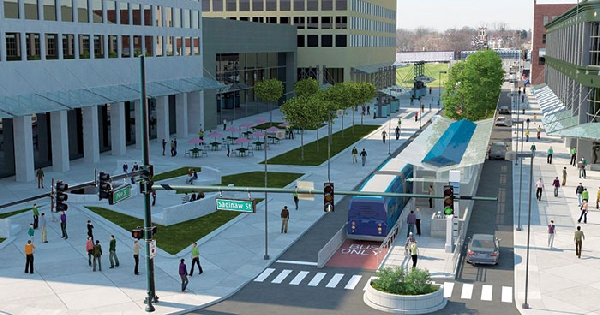 DEARBORN — Last Thursday, the Southeast Michigan counties affected by a proposed regional mass transit plan ironed out the final kinks, guaranteeing the plan’s placement on the November ballot. Voters from Wayne, Macomb, Oakland and Washtenaw counties will be able to choose whether they want a cross-county rapid public transportation system, said to end Michigan’s mobility drawback and boost economic development in the region.

The plan, composed by the Regional Transit Authority of Southeast Michigan (RTA), is expected to take 20 years to encompass the entire region. In the shorter term, it’s also expected to change the small business and housing landscape of Dearborn, a key hub in the transit system infrastructure.

Metro Detroit is well-known for sports and cars, but Ford Motor Co.’s hometown is revered as having one of the least reliable mass transit system in the nation.

Dearbornites, especially millennials, see the proposal as a no-brainer. However, not all residents will be voting yes this November.

For improvements and construction to begin, Southeast Michigan voters will be asked to consider a $1.2 million millage increase. This means an increase in property tax by an average of about $8 a month or $95 a year.

Last year, The AANews reported that high auto insurance prices in Dearborn are an economic burden on residents and pushing some motorists to drive illegally without coverage. The loss ratio for insurance companies hikes the rates.

Abdullah said as other modes of reliable transportation are added on the roads, the number of uninsured drivers will decrease, reducing the rates.

He added that fewer cars driven eliminates much of the wear and tear on roads, reducing funds needed to fix them.

“For every dollar we invest in public transportation, we get four dollars in return,” Abdullah said, adding that over time, the region will reap the benefits.

However, Regan Ford, Rotary Club of Dearborn president, said he hopes to soon see an effective mass transportation system in the region, but doesn’t view the RTA’s plan as viable.

“Wayne County residents are taxed to the gills,” Ford said.

He added that he would have supported the plan if the county had existing tax funds to sustain it. But even then, Ford said he would rather the county channel that money to deter crime and generate jobs. He questioned the proposal’s ambitions to do that.

Ford pointed to New York’s revered mass transit system, stressing that the state’s MTA puts the associated 12 counties in debt, while money is continuously poured into it.

Ford does not want the project to become, “Another public conglomerate that we’re just going to throw money at.”

Ford said many have moved away from the city into the suburbs to escape crime and that transportation connections could make it easier for robbers to commit crime in affluent suburbs.

According to 2010 Census data, 82 percent of Detroit’s population is African American. Haidar Koussan, co-owner of Greenland Market, said fear that opening avenues for Detroit’s residents to commute to other municipalities would be importing crime, is prejudiced.

“Let’s not be racist here,” he said. “The African American community is not about crime.”

Koussan said he has always voted yes on millages that bolster economic growth and bridge communities.

He added that, for example, the large Palestine community in Ypsilanti and Ann Arbor would greatly benefit from a quick and reliable commute to Dearborn, where they do most of their grocery shopping already.

Greg Tedder is the chief community development and marketing officer for the Michigan Economic Development Corporation (MEDC), an organization that issues grants and helps promote business growth in the state.

Through its automotive office, a pivotal objective of the MEDC is to leverage business development strategies for the auto industry and identify high potential attraction and growth opportunities.

The MEDC’s auto-related strategic plan outlines initiatives to attract talent and capital and develop technologies like connected and automated cars.

Tedder said the MEDC’s shifting perspective on the auto industry as a general mobility one aligns with the RTA’s views. The MEDC also takes into consideration additional modes of transportation and that the RTA’s goals— like incentivizing businesses to move to Detroit and neighboring cities— are complementary to the MEDC.

“You’ll have increased walkability, mobility and a better integration of where people work, live and play,” Tedder said.

Some have objected to the plan, saying it would directly compete with Detroit’s leading automotive industry and consequentially deliver a blow to car sales.

However, Tedder said one does not have to look further than Ford’s rebranding itself from an automotive to a mobility company, in addition to the $1.3 billion investment to renovate its headquarters in Dearborn, to understand the future of transportation.

Per MEDC’s goals, he added the transit system would create healthy competition to spark new innovations in connected and automated driving, attract talent to the industry and spur activity along the major corridors.

Since the project’s announcement in June, stakeholders in the four counties have negotiated their roles and contributions based on the benefits they would see coming into their communities. Stupka said the final proposal adds additional services, including a bus line from Ypsilanti to Livonia. He said it also established the Funding Allocation Committee within the RTA, structured to effectively manage government funding and tax revenues and ensure representatives from all counties agree unanimously on decisions.

Excluding Detroit, the RTA should reap about $37 million from the transit system in Wayne County in the first year, Stupka said. He added that 85 percent of the earnings would be reinvested in the county in the form of additional services and projects upon completion of the project.

A key component of the regional rail project would connect downtown Ann Arbor to Downtown Detroit, with a stop at the John D. Dingell Transit Center in Dearborn. Last year, the center served nearly 79,000 passengers.

Stupka added that the Michigan Avenue corridor has a high degree of transit demand and need, calling for the implementation of a bus rapid transit project that connects downtown Detroit along Michigan Ave. to east and west Dearborn, then further west to Merriman Avenue.

The “rails on wheels” would use up to two lanes. Large station facilities with pre-board ticketing would be utilized and would provide real time arrival and departure information as well as level boarding, so wheelchairs can easily roll into the buses.

Essentially, along with trains and light rails, buses would present a railway-like experience.

In Dearborn, stops would be about a half a mile to a mile apart and buses will use traffic signal technology to their advantage.

Stupka said the plan proposes a heavily improved bus service on Greenfield Road that would start at the John D. Dingell Transit Center and end in Troy. That project is expected to be completed by 2018.

The project is expected to be completed in 20 years, although the bulk of the work would be done in five years.