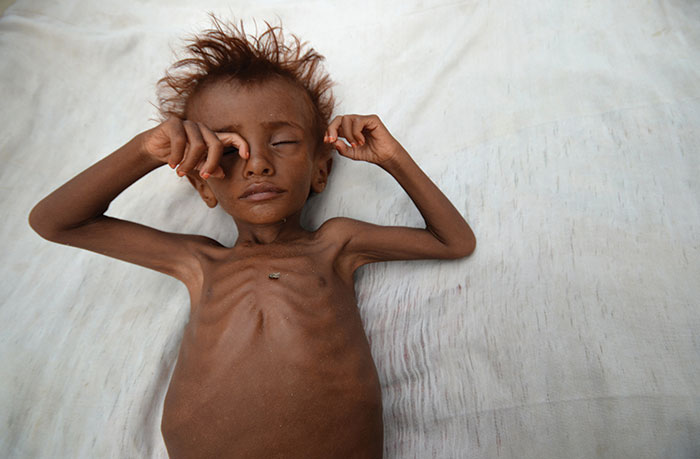 Yemen is on the verge of famine, according to media reports and humanitarian organizations.

The country’s social, economic and political fabric is being disseminated by the ongoing, apparently endless war.

For months, the warring parties met in Kuwait, agreeing and disagreeing every other day, until the negotiations collapsed and the violence resumed.

The fighting is not a mere routine headline that appears in passing in the newspaper. It is bringing destruction and death to a country once dubbed “Happy Yemen.”

The war has been at a standstill. The Houthis and the Saudi-backed forces of President Abd Rabbuh Mansur Hadi are unable to make decisive advances. Meanwhile, the Saudi-led coalition continues to bomb populated areas, claiming dozens of civilian lives each week.

Moreover, militants from ISIS and Al-Qaeda in the Arabian Peninsula have found fertile grounds for growth and recruitment in the midst of the chaos. They have targeted pro-government and Houthi forces and civilian supporters. These extremists pose a threat to the entire world, as evidenced by terrorist attacks in Europe over the past two years.

Concessions are needed from all sides. Such wars cannot be won on the battlefield. They are resolved at the negotiation table.

Saudi Arabia must end its futile bombing campaign, which has been massacring Yemenis to no avail. The role the Saudis and other Gulf states have played in the current state of Yemen has largely been disastrous.

Even if we are to agree with the premise behind the Saudi offensive that the Houthis are backed by Iran to take over the country, the kingdom is still to blame.

If Saudi Arabia had spent a fraction of the cost of the war on Yemen on infrastructure and job creation programs in the impoverished country, it would have preemptively brought stability and prosperity to its Arab neighbor and closed the door on foreign interventions in its affairs.

Instead, petro-Gulf states are spending billions on weapons and absurd projects and foreign investments like soccer teams in Europe, while abandoning less fortunate Arab nations, including Yemen.

One also cannot ignore the fact that a Houthi ally, former president Ali Abdullah Saleh, whom Saudi Arabia now accuses of corruption, had been a lifelong associate of the kingdom. Saleh was also a key partner in the U.S. “war on terror” and President Obama’s drone program.

But in the world of politics, good guys turn to villains by propaganda to match the interests of the rich and powerful.

The poor, the weak, the masses suffer amid global indifference. While proxy factions in Yemen receive weapons from their regional patrons, the people are starving and famine is spreading.

We call on the U.S. government to work toward a political resolution in Yemen and push for aid to end the ongoing humanitarian catastrophe.