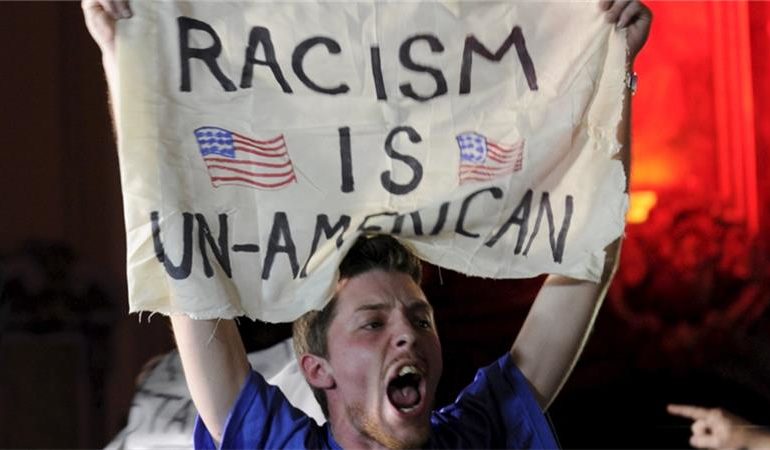 This week, an Arabic billboard with a deep message
denouncing Trump appeared on I-94.

Donald Trump, “can’t read this, but he is afraid of
it,” the large ad says.

It is a nice gesture that grabbed headlines around
the world.

However, anti-Arab and anti-Muslim sentiments run
deeper than the Republican candidate’s bizarre rise to political prominence.

We say this not to defend Trump but to address the
core of the issue. Denouncing Trump is easy. Challenging Islamophobia requires
real, collective efforts.

The GOP nominee has made vile comments about Muslims,
refugees and immigrants. His Muslim ban proposal was more extreme than any
domestic anti-Muslim policy ever suggested by a serious presidential candidate.

However, Trump did not invent Islamophobia. And many
of those slamming him for his bigotry today remained silent to all the blatant
media and political attacks on the Muslim American community throughout the
years.

What Trump did is unearth the hate and benefit from
it. His numbers in the polls surged during the primaries after he called for
banning Muslims from entering the United States last November.

He took advantage of the bigotry and misunderstanding
that have been brewing in American society for years.

It is rather ironic that Bill Maher, for example,
criticized the GOP candidate on the Muslim ban, when the comedian’s rhetoric
has helped stoke the anti-Muslim wave that Trump rode all the way to the
Republican nomination.

Almost a year before Trump announced his candidacy,
Maher described Islam as a “mafia” that would kill you if you say the wrong
thing.

Trump was not around when seven states passed absurd
bans on Sharia law, furthering the false notion that Muslims want to impose
their way of life on society, which would make them a threat to the U.S.
Constitution.

Trump is a product of this irrational fear, not a
cause for it.

The GOP candidate does not control intelligence
agencies that pursue entrapment tactics to incriminate young Muslim men on
terrorism charges, making it appear that their communities are a threat to
their surrounding.

For the years after 9/11 politicians only discussed
Muslim communities within the frame of national security.

Even Trump’s opponent, Hillary Clinton, said Muslim
communities “are on the front lines to identify and prevent attacks.” This is
hardly a compliment.

All such remarks do is solidify the perception of an
association between Muslim Americans and terrorism.

At this point, condemning Trump’s bigotry is as
redundant as denouncing creepy clowns.

Trump looks set to lose the election. Our fellow
Americans who stood for Muslims against the GOP nominee should address the
sources of Islamophobia, which are rooted in White supremacy and fear of
others.

It is a battle that may be more needed than ever
after the election is over. Trump may lose, but his supporters who share his
ideas are going nowhere and growing. With his confessed unwillingness to accept
the outcome of the vote, bigots will be angrier than ever.

Americans at all level
should speak out and confront prejudice — at the family’s dinner table, at
places of worship, in political circles, in the media and in the ballot box,
from municipal elections all the way to the top of the ticket.