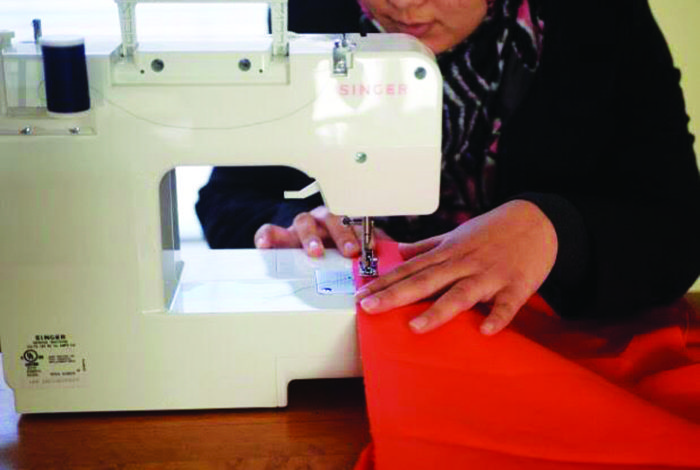 ANN ARBOR — A common emotion most mothers carry is hope— especially when carrying their babies in their wombs.

They paint pictures of the future and attain strength from carrying that feeling, which Brea Albulov called “Hope Carried.”

When the mother of two started her home-based business a year and a half ago, she didn’t know she’d end up naming it that— a name resonating with mothers everywhere.

According to her website, hopecarried.com, the baby carriers Albulov and her employees sew embrace newborns like wombs and aid with their transition stages. They also allow mothers to get things done and move around more flexibly.

However, the business does a lot more than that.

“We work directly with employment case managers to provide opportunities to women who face barriers to employment,” Albulov said. “Our partnership allows us to get a product made of great quality and provides them with the ability to earn extra money while working from home. We just welcomed our sixth woman to the Hope Carried team. All the women have immigrated from Afghanistan, Iran, Iraq and Syria.”

In the beginning, right after giving birth to her second baby, she started sewing wraps for herself because her first child was only 20-months-old at the time. The active mother needed to keep an eye on both children.

“I started making baby wraps,” she said. “I made my first ring sling, which is the type of baby wrap that has the two rings on it, with the fabric stitched through it.”

Albulov said commercial products were neither very comfortable nor her style, so her mother helped her sew her own. After posting photos on Facebook, both friends and strangers asked her about her wraps and slings.

“I realized, maybe I should start doing something with this,” she said. “Maybe this can help financially.”

Albulov opened up an Etsy shop and at the time, the business’s name was called “Joho Baby”, which combined the names of her daughter, Josephine, and son, Holden.

“I’ve always had a heart for giving back,” she said. “Just being intentional about how we are, so one of the things that really touched me was motherhood.”

As Albulov watched the Syrian crisis unfolding, she’d imagine not having a secure place for her own children or not being able to provide food for them. She hoped to help in some way, but wasn’t sure how.

An NPR news segment provided her first strand of hope.

“It was talking about a woman who had fled Afghanistan,” she said. “In Afghanistan, she ran a humanitarian organization, but here in Michigan she was looking for work as a seamstress. So I thought, oh, my gosh, I should hire her.”

Albulov contacted the Detroit-based organization Freedom House and met with the founder. She said the woman ended up getting better offers from Washington D.C. in the humanitarian work in which she was skilled.

“But, there was somebody who worked there and had also used the services,” she said. “His wife sewed, so I hired her.”

She looked for other human rights organizations that worked with refugees closer to where she resides in Ann Arbor and came across Jewish Family Services. She told them about her business and her intent to hire refugees.

“They started matching me with women who wanted to sew,” she said.

Albulov said that JFS now buys a sewing machine for each woman Hope Carried hires because of how positive the outcome was.

Albulov said she changed the name of the business in January, because she felt the original name didn’t express her objectives like “Hope Carried” did. She wanted to provide as many jobs as possible to mothers and free them at the same time.

“I hear it a lot in the reviews from people who have purchased the baby carriers,” she said. “That they give you such a freedom, a feeling that you can be a good mom, you can do it all.”

She added that Hope Carried also provides the seamstresses hope and a sense of empowerment because they are able to contribute to their own families far from their home countries.

She believes the name to be a gift from above.

“The name was a God thing,” Albulov said. “I definitely think I couldn’t have come up with a name that perfect.”

As for safety concerns, she said there’s very little room for mistakes if the wraps and slings are worn correctly, but she always recommends safety measures before carrying the baby. She said mothers or fathers should inspect the carrier and that it comes with a guideline that shows them correct usage.  It explains the proper positioning, the weight range each carrier can hold and other safety tips.

“To date, we have shipped well over 1,200 of our Ring Slings and Baby Wraps to just about every corner of the world and have well over 250 five star reviews,” she said.