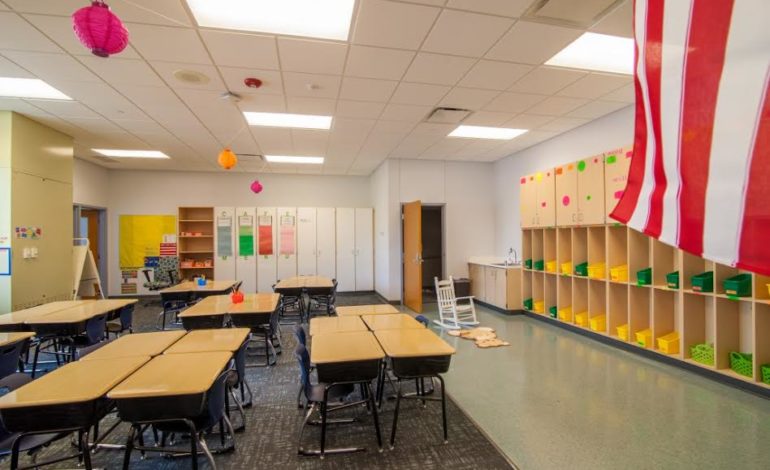 Dearborn—For decades, Betsy DeVos test-ran privatization campaigns in Michigan before assuming her role as Donald Trump’s pick for Secretary of Education. Having funneled millions to lawmakers and the state Republican Party to assist in shepherding legislation that especially focused on privatizing education, the school of choice advocate also spearheaded the proliferation of charter schools in Michigan.

Discussion of teacher shortages in recent years is joining old concerns about relatively low Program for International Student Assessment (PISA) scores, continuing questions as to why America continues to be the scourge of First World education systems.

Dearborn is no stranger to such issues in public education. Like neighboring Detroit, a city plagued by the failure of its public school system, Dearborn faces risks as a school district a sliver away from priority status, referring to the lowest achieving 5 percent of all public schools in the state.

Nationwide, pursuit of pre-professional programs in teaching has dropped, as reflected in significantly lower enrollment rates for these programs in Michigan colleges. With enrollment preparation programs having declined 38 percent from 2008 to 2013, the trend of teachers leaving local districts have been met with an increasing number of college students opting out of entering the profession in the first place.

The exodus from teaching jobs is most salient in larger states such as California, declining 53 percent over the last five years; and New York, where stagnant wages and high pension costs characteristic of the profession coalesces with skyrocketing rent prices.

Robert Seeterlin, human resources manager for the Dearborn Public Schools, identifies stagnant teacher salaries and lack of respect for teaching as two main culprits that make it difficult for the district to find candidates to fit the positions.

“We are seeing the same thing with law enforcement,” said Seeterlin, drawing a comparison between low salaries in both professions that drive talent away.

Under pressure and under supported

“When we get written up or [poorly] rated, we are not allowed to [refute] that,” said a young educator who asked to be called Samantha.

With teacher unions bludgeoned and teacher evaluations subject to bias, teachers are further shut out from exercising resistance against poor pension plans, a lack of resources and the added pressure of juggling to create classroom curriculum while teaching as administrations re-orients themselves towards corporatized assessment programs.

Given low retention rates for teachers, conditions in public education have forced out talent and rewarded compliancy.

In turn, this strong manufacturing base bolstered schools in cities like Dearborn, whose public school tax bases were alleviated by the revenue a good economy brought in.

“Dearborn would have to levy a 5 percent property tax,” writes Joe Darden in “Detroit: Race and Uneven Development”, “to come up with the same school revenues that Dearborn Heights could raise with a 1 percent tax.”

As manufacturing jobs began to wane, the financial burden on these schools rose, with problems aggravated most acutely in inner cities where these dwindling factories operated.

Seeterlin noted that as the tax base from once-thriving industries shrunk, education reform programs, such as schools of choice and charter schools, began to be implemented. In turn, many of these cities’ populations shrunk. When communities lose their populations, Seeterlin explained, they lose their funding.

In 1993, then-Governor John Engler, a staunch advocate of school of choice programs, signed a $6.7 billion tax base removal to relieve communities against increasing tax burdens.

This action summoned in charter schools to replace public institutions that had lost their funding.

Is corporatization the answer?

The corporatized focus on standardized testing, a legacy of 2001’s No Child Left Behind (NCLB), burdens teachers who are forced to squeeze in year-end assessments mid year to make room for myriad other standardized tests mandated over the school year.

Not only does this offer little room for curriculum, but works against a teacher’s ability to provide lessons or instruction outside of test preparation.

“Teachers have no choice but to teach what [the administrators] want,” Samantha said.

The educator also explained how Title 1 funding cuts in lower income and low performing regions has incentivized districts like Dearborn to purchase packages from companies. When one package fails to yield results, the district simply moves onto another.

Since the mid-1990s, charter schools have gained traction in both Dearborn and Detroit as alternatives to neglected public institutions. More than two decades of for-profit charter records in Detroit point to questionable and wasteful spending and a refusal to disclose how taxpayer money is spent.

Even the lack of transparency in how charter schools utilize their funds cannot conceal their abject failure. Half of Michigan’s charter schools rank in the bottom quarter for academic performance, based off 2013-2014 accountability data. Public schools, on average, also report higher standardized test scores on average— even when controlled for poverty levels.

Before implementing such education reforms, Finland, in fact, ranked among the lowest in the developed world. Ironically, that country stands in stark contrast in performance to the nation to which it owes the template of its educational model.

Dearborn, a district once most selective with teachers, now struggles to fill vacancy slots in its public institutions, despite a growing population that demands more teachers than ever.

Out of 13 of Samantha’s teacher friends, only three remain in the profession. One left for the mortgage industry; one is now a software developer and one even committed suicide.

Samantha herself plans to go into administration.

While Dearborn faces its problems stemming from its unique economic and political history, the district’s education problem is not asunder from a nationwide epidemic.

The answer in either case would be a return to reforms that service teachers and students and eschew ineffective programs and overly privatized models of education.