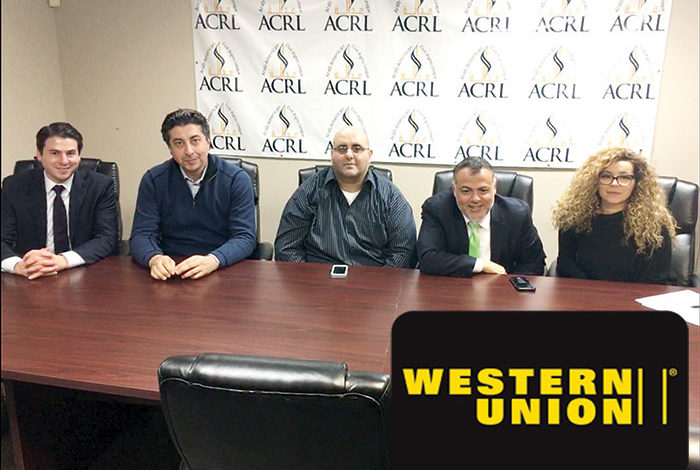 DEARBORN – Following a complaint against the Western Union by the Arab American Civil Rights League (ACRL) that alleged it was discriminating against Arab and Muslim customers, the money-transfer giant has issued an apology on at least one case.
Complainant Haidar Abdallah, a Dearborn resident, and a U.S. citizen, claimed that he had attempted to transfer funds to his spouse and children who were visiting family in Palestine, which was rejected by Western Union.
Abdallah said that he had used the service on numerous occasions prior, and had come across no issues when he would transfer money, around $300-$400 at a time,  to Jerusalem.
However, Abdallah claimed that when he attempted to transfer to the West Bank, the company flagged him.
He was barred from using the service at any of the company’s locations.
When asked why he wasn’t able to make a transfer, the company requested additional verification information about his employment and financial background.
Even after meeting their demands, Western Union refused to reinstate his transfer privileges and had failed to provide an expaination or supplemental information related to such determination, other than deeming such action a “business decision” and asserting their right to refuse service to any person.
Abdallah said that after repeated denial from Western Union, he took his business to MoneyGram, who he said gave him no such issues.
The civil rights group noted that Abdallah was not the only victim of such treatment by Western Union. The ACRL had received similar complaints from other Arab American residents in the metro-Detroit region.
After the complaint was filed on December 21,  Western Union issued an apology.
“After further review, Haidar Abdallah is now currently permitted to send or receive funds via the Western Union Money Transfer service,” the company said. “Quality service to our consumers is our primary concern at Western Union. Apologies for your overall experience and for the struggles you faced interacting with Western Union. Please be aware that discourteous treatment to our customers is neither excusable nor tolerated at Western Union.”
The ACRL said it is still deeply concerned with the manner in which these transfers are denied.
Rula Aoun, director of the ACRL, told The AAnews that because a complaint was filed with the consumer financial bureau, Western Union was forced to respond to Abdallah’s particular case.
“Because we took specific action, they had a specific response,” Aoun said. “We are definitely willing to move this forward, whether by individual complaints or a class action suit, it just depends how extensive the cases are.”
She noted she had a “hunch” as to why the company denied Abdallah from its services, but wouldn’t give further details–other than the reason being  “ridiculous.”
ACRL believes clients who are transferring money to the Middle East region are more prone to such issues–thus resulting in the mistreatment of Arabs and Muslim.
“Seeing that they have not done their best to eliminate these errors, it just seems they don’t care that’s it’s affecting members of our community,” Aoun said. “These actions are based on pre-conceived profiling nature, which is not acceptable. If we feel this is affecting more people than we are aware of and more people come forward with similar experiences, we will explore having effective change in their policy and requiring them to eliminate future errors.”
ACRL asks anyone that has been similarly affected by these Western Union practices to contact our office at (313) 633-0231.