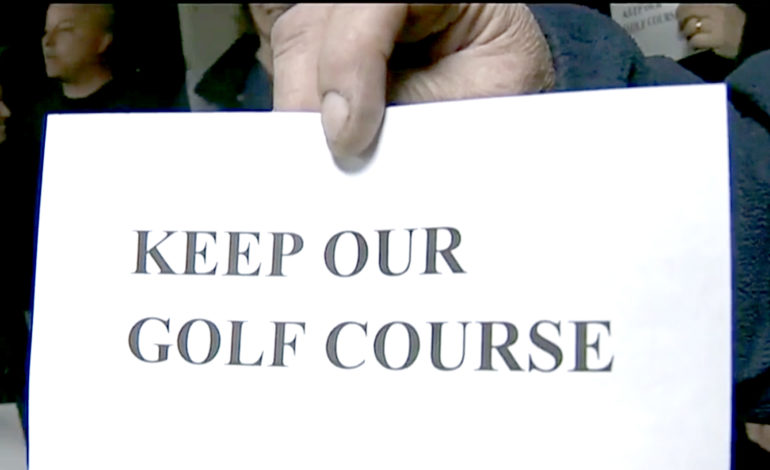 Recently, however, the future of the 36-hole golf course has been in doubt, with Wayne County potentially planning to sell it for the development of gated subdivision by Delta Management to house around 200 homes.

Developers and county officials cited plummeting property values as the reason for the golf course’s jeopardizing devaluation as of late.

His statement received jeers and disagreement from residents who disagreed.

The town hall, hosted by Wayne County Commissioner Diane Webb (D-Dearborn Heights), attracted more than 540 residents, many of whom lived in the neighborhoods surrounding the golf course.

As the mayor of the city of Dearborn Heights. I would like to ask that you publicly oppose the sale of the Warren Valley Golf Course and Banquet Hall to developers. – Dearborn Heights Mayor Dan Paletko

Rahal introduced the proposal to the audience as a “hope that we can develop the golf course into a luxurious subdivision”, addressing the demand in Dearborn Heights, mainly among newer residents, for more housing options.

“A lot of folks [are] moving out to Northville and Canton,” he said.

In an effort to salvage a tax base for the area, the county plans to sell the property for $1.8 million. In exchange, it must invest at least 30 million into the 250 acres of land.

The county hopes the revenues can alleviate an $800,000 debt.

Attendees, including many avid golfers, reacted with jeers, boos and shouts as members of the development group attempted to describe the plan to turn the golf course into a gated community. Some among the riled crowd even hurled personal slurs and racial epithets.

“Some of the behavior of those attending were obnoxious and rude,” said James Martinez, communications director for Wayne County Executive Warren Evans, rejecting the “offensive” nature of some comments that were “not reflective of the welcoming, tolerant community Wayne County should be, and usually is.”

Audience members periodically held up paper signs reading “KEEP OUR GOLF COURSE”, which had been handed out at the door, as an expression of their opposition to the proposal.

“To me, it would be a travesty to see this golf course go to homes,” said long time Warren Valley employee Joe Mitchell, who reiterated the concerns of a crowd not willing to see the environmental degradation of the 95-year-old golf course. “Once you lose a green area, it will be gone forever.” Many residents voiced concerns about the adverse environmental impacts of building on what is a natural flood zone.

Built on a floodplain, the region and its surrounding houses are at risk for flooding should developments infringe upon the intricate structure of a nature-constructed retention pond.

Wayne County’s plan for the development involves permitting the privatization of the infrastructural drainage management, leaving the solution up to Delta Management should the plan be approved.

“The developer, as part of any sales agreement, would be required to perform an analysis of the affect the development would have on flooding,” Martinez said.

Many residents and officials in Dearborn Heights also recognized that the local school district is at capacity.

“We don’t have space for the additional students for the 200 or 250 additional houses,” said Dr. Laurine VanValkenburg, superintendent of the Crestwood School District.

VanValkenburg also expressed disappointment with the lack of notice the school district received about the project.

“There is a concern we were never contacted by anyone in the county,” she said.

At the Dearborn Heights City Council meeting on February 28, Webb claimed that county officials rushed to assume that the County Commission had supported the decision.

“That is not true,” she said, acknowledging that while the commissioners “gave the county a chance and wanted to hear” plans to help the county’s property tax revenue, their consideration was not necessarily an act of approval.

While the decision will ultimately rest on the approval of at least eight of the 15 county commissioners, City Council members also felt prompted to take positions on the issue.

Councilman Dave Abdallah said he considers environmental issues as a reason for a possible re-visitation of the proposal. He also said that despite some doubts, he recognized that, “at the end of the day, decisions have to be made.”

Ultimately, demand and input from all areas of Dearborn Heights will determine the future of the golf course, said Abdallah, who recognized that, thus far, mainly those immediately affected by the development have been vocal against the proposal.

“I want to make sure all residents have their say on it,” he said, adding that he acknowledges the importance of “getting voices from all residents of this city.”

However, many residents, namely those outside the proximity to the golf course, were unaware of the proposal.

Abdullah added that while those around the golf course might be naturally disadvantaged by the development, the increased tax revenue could help other parts of the city and county. He said he wanted to account for their perspective.

“The south Heights can benefit from this,” he said.

Councilman Ray Muscat, while originally in support of the proposal, seeing it as a financially beneficial opportunity for the county, recanted his support for the development.

“I want money, I want economic growth,” he said, regarding his initial support for the proposal, but added that he’s one of those people whose basement did flood.

“I don’t know how [building on the property] is going to affect me long term,” he said.

Mayor Dan Paletko has also rescinded his support for the development, according to sources in the city.

Citing environmental and logistic concerns while paying tribute to the historical and aesthetic merits of the golf course, Paletko wrote a letter to the Wayne County Commission opposing the sale of the golf course.

“I do not want to fight for 30 more years to alleviate a flooding problem for the North-End of Dearborn Heights when there is currently NOT a problem and the proposed problem can be stopped,” he wrote. “I ask that when the time comes, your honorable body reconsider this project.”