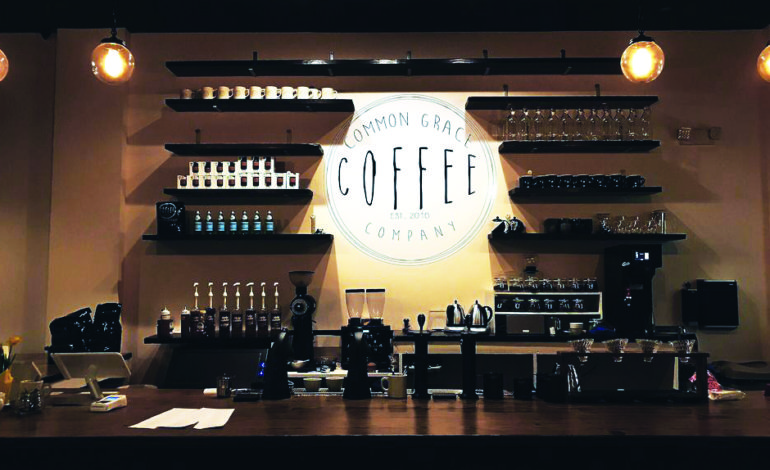 DEARBORN— By providing an ample space and an inviting atmosphere, Common Grace Coffee Company owner Dale Tremblay-Dulong wanted to see a space where common grounds are just as special and important as its specialty coffee.

The name of the enterprise, Common Grace, “comes from a doctrine that states that God gives undeserved favor to all people,” according to Tremblay-Dulong, 23, in a recent video posted to the business’s Facebook page.

Attracted to Dearborn’s diversity, the young owner moved to the city in 2014. Within two years, he was already in the process of starting up the coffee shop.

It hasn’t been without controversy, however.

In late February, screenshots from the missionary website “Commission to Every Nation” showing Tremblay-Dulong’s profile circulated on social media among local residents. They were the cause of a great deal of concern and conversation among local Arabs and Muslims wary of the intentions of the former missionary.

Zeinab Chami, a Dearborn educator, wrote in a post featuring the screenshot of the profile that, “apparently, we were ignorantly funding our own attempted conversion to Christianity.”

Chami, who has no intentions of starting a boycott, wanted to bring awareness and start a conversation among members of her community.

“It’s not about it affecting his business,” she said. “But the whole idea is being aware of why he came to this community.”

Some expressed concern about the intentions of the business as a forum to seek converts in the community, given that a cached page of the profile, which has since been removed from the website, includes the statement, “Their [Dale and Stephanie Tremblay-Dulong’s] hope and prayer is to see Muslims come to faith in the one true God.”

“We recognize the diversity of Dearborn,” Tremblay-Dulong said, speaking on his intent in opening up a space where “people…that would not normally come together to sit at the same table, lay aside their differences…learn more about who we are as different people with unique cultures.” Noting the lack of specialty coffee places in the area for high quality java aficionados, Tremblay-Dulong reiterated the shop’s “first and foremost” mission, which is, “to serve good coffee.”

“We love the opportunity that coffee presents to be not only simply enjoyed, but also something that can be complexly dove into as a substance that is very, very intrinsic in its character,” he said.

Offering ample space and table sizes for groups to congregate; for meetings—both planned and spontaneous— to take place and for workshops to be held, Common Grace also hosts live music Fridays in its effort to foster a multipurpose public space.

“We have big tables because we wanted this to be a place where people can come hang out with friends,” Tremblay-Dulong said, adding that the lack of wall outlets was deliberate.

“We didn’t want this to just be a library,” he said. Rather, Common Grace would be a forum, “where people can shut down their computers and just have a conversation.”

While many different bars and cafes are tailored to service the many diverse niches in the city, Tremblay-Dulong sought to ensure that his coffee shop serves those with a wide range of interests, lifestyles and hobbies.

With those facts in mind, he sees Common Grace as a “platform” and “gathering spot for the city.” Tremblay-Dulong emphasized that his specialty coffee is as carefully sourced and grown as it is pressed and served behind the counter. The small business maintains a direct relationship with local farmers in Nicaragua, as well as various other relationship with importers.

“Coffee can be grown, just as it can be served, with very little attention and care,” he said, adding that such attention is important at Common Grace.

A local resident who asked to be called Sumeya asked just why a former missionary would want to open up a coffee shop in Dearborn that puts such a heavy weight on “conversation” and “coming together.

Showcasing Tremblay-Dulong’s reverence for the “livelihood” around both coffee and conversation, Common Grace seeks to serve coffee that transcends a mere transaction and, “to do everything with the level of intentionality that is consistent with our convictions as humans.”

With respect to that since-removed “Commission to Every Nation” profile, many community members have come out against allegations that either Tremblay-Dulong or his business harbors any nefarious intent. Still, there were questions.

Attuned to Common Grace’s welcoming atmosphere, a local resident who asked to be called Sumeya asked just why a former missionary would want to open up a coffee shop in Dearborn that puts such a heavy weight on “conversation” and “coming together.”

“Being a missionary is not a part time job or position,” she said. “It is a lifestyle and lifelong commitment. And again, they work with the unspoken language of love.”

By contrast, one Arab and Muslim staffer described the shop’s intent to serve as a place where “people who do not normally come together meet and learn from one another.”

She described her boss as being welcoming and posing no threat to anyone’s belief or faith.

“Dale is a wonderful employer…[and was] so accepting of different faiths, especially my own,” she said. “I don’t think people have anything to fear.”