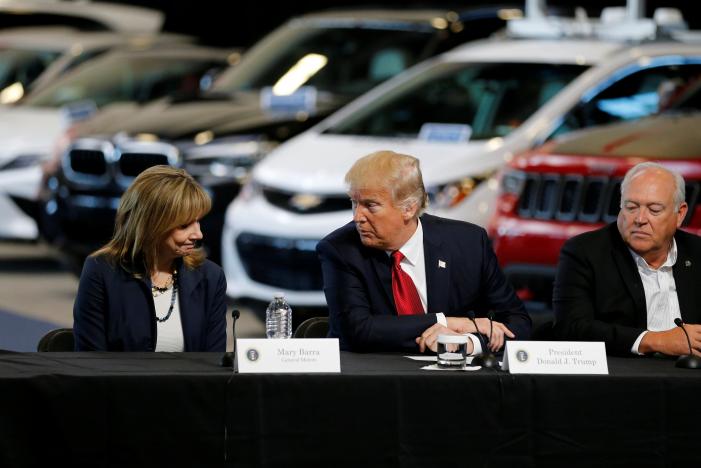 DETROIT — On Wednesday, President Trump ordered a review of tough U.S. vehicle fuel-efficiency standards put in place by the Obama administration, handing a victory to auto industry executives and provoking criticism from Democrats and environmental groups.

In a move widely seen as a preamble to loosening fuel standards, Trump told an audience of cheering union workers, he would “ensure that any regulations we have protect and defend your jobs, your factories” and promised he would encourage growth in the U.S. auto sector.

“The assault on the American auto industry is over,” Trump said, standing in front of a banner that read “Buy American-Hire American.”

Trump added that the White House is “setting up a task force in every federal agency to identify and remove any regulation that undermines American auto production.”

The backdrop and message underscored Trump’s efforts to lock down support in industrial states such as Michigan that put him in the White House. Trump spoke at the site of the former Willow Run bomber factory in Ypsilanti, which won fame for building an operational B-24 heavy bomber every 59 minutes during World War II. Now, the site is being redeveloped as a testing ground for autonomous vehicles.

At a roundtable with industry leaders Trump made clear he expected automakers to hire more Americans in return, a theme that dominated his election campaign.

“We’re going to do some wonderful work with you, but you’re going to have to help us with jobs,” he said.

Automakers lined up examples of vehicles they build in the United States for the president to see.

Auto industry executives have said they are hopeful the Trump administration will pursue tax and regulatory policies that would benefit U.S. manufacturers.