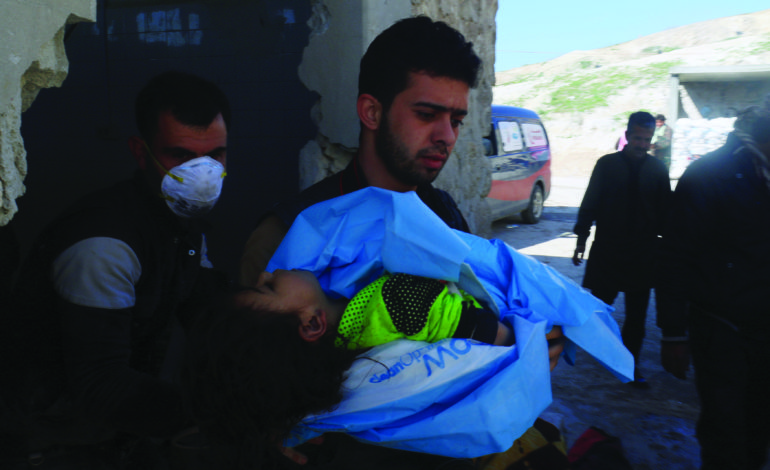 A man carries the body of a dead child, after what rescue workers described as a suspected gas attack in the town of Khan Sheikhoun in rebel-held Idlib, Syria April 4 - Photo by Reuters

The deadliest chemical attack in Syria in years killed dozens of people in the rebel-held northern Idlib province on Tuesday morning, including children, and sickened scores more. The alleged “chemical airstrikes” are said to have taken place in the town of Khan Sheikhoun, about 50km south of the city of Idlib.

Predictably, the Americans, French and British have triggered a wave of “consensus condemnation” and indignation by the usual voices, the U.N.’s Staffan de Mistura, French President Francois Hollande and, of course, UK Foreign Secretary Boris Johnson, who said that President Bashar al-Assad “would be guilty of a war crime” if it somehow be proven that his “regime” was responsible.

This happened as pressure mounts on President Trump and his administration to draw him into deeper war commitments in Syria. Washington operatives opposing Russian involvements in Syria have started beating the drum of war again. The Idlib tragedy, by design or not, gave the warmongers in Washington and Europe the extra strength to beat it harder than ever, hoping for a new U.S.-led attack on Syria that can change the status quo that has existed in favor of Assad and his government.

It is also worth mentioning that the latest alleged chemical attack in Idlib came as a convenient backdrop on the eve of Brussels’ “Peace Talks” and the conference on “Syria’s future.”

Meanwhile, a U.S.-led “coalition” prepares to make its end-run to capture the Raqqa Province from ISIS and impose safe zones in a blatant attempt to partition Syria. In order for the plan to work, more demonization of the Syrian government and Assad appears to be needed in the West.

On cue, the multi-billion dollar Western media machines sprung into overdrive, blindly repeating unsubstantiated reports based primarily on opposition “activists” and media affiliates, such as the Aleppo Media Center and others embedded in the Al Nusra-dominated stronghold of Idlib. These include the Step News agency and the Edlib Media Center (EMC), alongside its media counterpart, the UK-based Syrian Observatory for Human Rights (SOHR), which is funded by the UK and EU and operated by Rami Abdul Rahman out of his house in England’s countryside. All claim that the Syrian and Russian air forces have launched a chemical airstrike killing civilians in Idlib.

The SOHR said it was unable to say what exactly was dropped. However, the Edlib Media Center said it was believed to be the nerve agent sarin, which is highly toxic and considered 20 times as deadly as cyanide.

Is theWestern media’s version of events what actually happened in Idlib? The answer lies in the history bank of lies and deception that led to the unjust and immoral U.S. invasion of Iraq in 2003. That war was based on false premises of the so-called weapons of mass destruction, coincided by a media campaign demonizing Iraqi President Saddam Hussein as a pretext for the disastrous conflict that destroyed Iraq and created the terrorist group ISIS.

Never in its reporting does the mainstream media in America and/or Europe ever express any skepticism that maybe their sources could be providing false or misleading information, knowing, ultimately, these reports will be used as tools to renew calls by Western officials for military strikes against the “Syrian Regime.” That’s exactly what happened immediately after these reports about the chemical attack were broadcast.

In fact, within a few hours after the attack, U.S. Rep. Adam Kinzinger (R, Illinois) appeared on CNN with Wolf Blitzer, who asked Kinzinger, “What can be done to remove this regime?”

Kinzinger called outright for U.S. airstrikes to “take out the Assad Regime in Syria”, including “cratering their airstrips so no planes can take off” and creating a “No Fly Zone” over Syria. These statements are serious and should not be taken casually. The problem is they are based on a series of lies.

“The Syrian people should be able to choose their own (political) future,” Tillerson said.

It is worth noting that Kinzinger himself traveled to northern Syria between 2013-2014 to provide his personal assurances that these terrorist fighters would be receiving U.S. weapons and TOWmissiles, which arguably, is responsible for extended the life of this needless proxy war in Syria.

Warmongers don’t even wait for an investigation to begin. As if on cue, the White House, members of Congress from both parties, Israel, the UK, and the European Union are ready to condemn the Syrian government and Bashar al-Assad. In contrast, only a few days ago, the Trump administration announced an American raid in Yemen left more than 20 dead, mostly children, a tragedy that was totally ignored by Western officials and media.

Renowned investigative reporter Seymour Hersh has clearly documented that the last large sarin attack blamed on the Syrian government was actually carried out by extremist groups with the support of Turkey and Saudi Arabia. Hersh also documented that chemical weapons were transported from Libya to U.S.-backed rebel groups in Syria by the CIA and Hillary Clinton’s State Department. Yet, the mainstream media do not mention any of this. They immediately jump all over this story like trained dogs. They ask no tough questions. They entertain no doubts. They repeat previous lies that have already been debunked. They unashamedly interview sources who have long been cheerleaders for military intervention in Syria.

In conclusion, the chances that the Syrian military actually carried out the chemical attack in Idlib Tuesday morning are pretty much nil. Why? The Syrian government has absolutely nothing to gain from such an attack, and a lot to lose. The government is steadily gaining more ground and the terrorist groups are on the run. The Trump administration announced last week that it will not seek Assad’s ouster. Peace talks to end the war are about to resume. So, who benefits from this horrific attack?