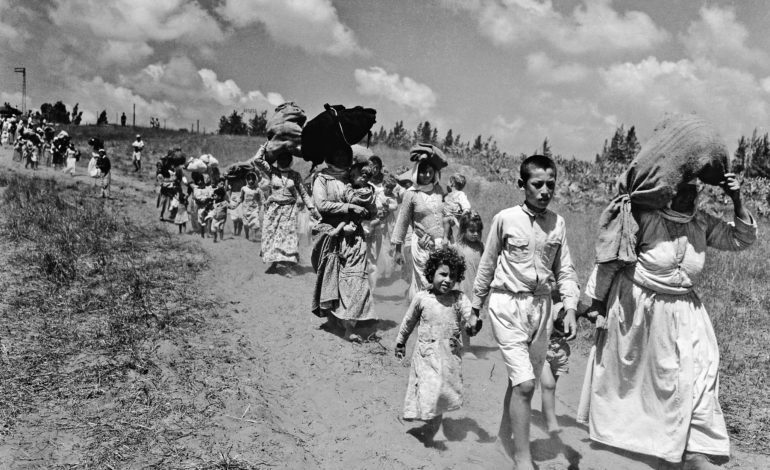 Israel has resorted to three main strategies to suppress Palestinian calls for justice and human rights, including the Right of Return for refugees.

One is dedicated to rewriting history; another attempts to distract from present realities altogether and a third aims at reclaiming the Palestinian narrative as essentially an Israeli one.

The rewriting of history happened much earlier than some historians would assume. The Israeli hasbara machine went into motion almost simultaneously with Plan Dalet (Plan D), which saw the military conquest of Palestine and the ethnic cleansing of its inhabitants.

But the actual discourse regarding the “Nakba” — or the “Catastrophe” — that befell the Palestinian people in 1947-48 was constituted in the 1950s and 60s.

In an article entitled, “Catastrophic Thinking: Did Ben-Gurion Try to Rewrite History?”, Shay Hazkani revealed the fascinating process of how Israel’s first prime minister, David Ben-Gurion, worked closely with a group of Israeli Jewish scholars to develop a version of events to describe what had taken place in 1947-48: The founding of Israel and the destruction of Palestine.

Ben-Gurion wanted to propagate a version of history that was consistent with Israel’s political position. He needed “evidence” to support that position.

The “evidence” eventually became “history”, and no other narrative was allowed to challenge Israel’s take on the “Nakba.”

“Ben-Gurion probably never heard the word ‘Nakba’, but early on, at the end of the 1950s, Israel’s first prime minister grasped the importance of the historical narrative,” Hazkani wrote.

The Israeli leader assigned scholars in the civil service to the task of fashioning an alternative history that continues to permeate Israeli thinking to this day.

Distracting from history — or the current reality of the horrific occupation of Palestine — has been in motion for nearly 70 years.

From the early myths of Palestine being a “land with no people for a people with no land” to today’s claim that Israel is an icon of civilization, technology and democracy surrounded by Arab and Muslim savages, Israel’s official distortions are relentless.

The absurdity is not escaping all Israelis, of course.

“A state that celebrates 50 years of occupation is a state whose sense of direction has been lost, its ability to distinguish good from evil, impaired,” wrote Israeli commentator Gideon Levy in the “Haaretz.”

“What exactly is there to celebrate, Israelis? Fifty years of bloodshed, abuse, disinheritance and sadism? Only societies that have no conscience celebrate such anniversaries.”

Levy argues that Israel has won the war of 1967 but has “lost nearly everything else.”

Since then, Israel’s arrogance, detestation of international law, “ongoing contempt for the world, the bragging and bullying” have all reached unprecedented heights.

Levy’s article is entitled, “Our Nakba.”

Levy is not attempting to reclaim the Palestinian narrative, but is succinctly registering that Israel’s military triumphs were an affliction, especially as they were not followed by any sense of national reflection or attempt at correcting the injustices of the past and the present.

However, the process of claiming the term “Nakba” has been pursued cunningly by Israeli writers for many years.

For those scholars, “the Jewish Nakba” refers to the Arab Jews who arrived in the newly independent Israel, largely based on the urgings of Zionist leaders for Jews worldwide to “return” to the Biblical homeland.

A “Jerusalem Post” editorial complained that “Palestinian propaganda juggernaut has persuaded world public opinion that the term ‘refugee’ is synonymous with the term ‘Palestinian.'”

By doing so, Israelis attempting to hijack the Palestinian narrative hope to create an equilibrium in the discourse, one that is, of course, inconsistent with reality.

The editorial puts the number of “Jewish refugees” of the “Jewish Nakba” at 850,000, slightly above the number of Palestinian refugees who were expelled by Zionist militias upon the founding of Israel.

Luckily, such disingenuous claims are increasingly challenged by Jewish voices as well.

A few — but significant — voices among Israeli and Jewish intellectuals around the world are daring to re-examine Israel’s past.

They are rightly confronting a version of history that has been accepted in Israel and the West as the uncontested truth behind Israel’s birth in 1948, the military occupation of what remained of Palestine in 1967 and other historical junctures.

These intellectuals are leaving a mark on the Palestine-Israel discourse wherever they go. Their voices are particularly significant in challenging official Israeli truisms and historical myths.

Writing in the “Forward”, Donna Nevel refuses to accept that the discussion of the conflict in Palestine starts in the war and occupation of 1967.

Nevel is critical of the so-called “progressive Zionists” who insist on positioning the conversation only on the question of occupation, thus limiting any possibility of resolution to the “two-state solution.”

Not only is such a “solution” defunct and practically not possible, but the very discussion precludes the “Nakba” of 1948.

The “Nakba doesn’t enter these conversations because it is the legacy and clearest manifestation of Zionism,” Nevel wrote.

“Those who ignore the “Nakba” — which Zionist and Israeli institutions have consistently done — are refusing to acknowledge Zionism as illegitimate from the beginning of its implementation.”

This is precisely why the Israeli police have recently blocked the “March of Return”, conducted annually by Palestinians in Israel.

For years, Israel has been wary that a growing movement among Palestinians, Israelis and others around the world have been pushing for a paradigm shift in order to understand the roots of the conflict in Palestine.

This new thinking has been a rational outcome of the end of the “peace process” and the demise of the “two-state” solution.

Incapable of sustaining its founding myths, yet unable to offer an alternative, the Israeli government is now using coercive measures to respond to the budding movement: punishing those who insist on commemorating the “Nakba”, fining organizations that participate in such events and even perceiving as traitors any Jewish individuals and groups that
deviate from its official thinking.

In these cases, coercion hardly works.

“The March (of Return) has rapidly grown in size over the past few years, in defiance of increasingly repressive measures from the Israeli authorities,” wrote Jonathan Cook in “Al-Jazeera.”

It seems that 70 years after the founding of Israel, the past is still looming large.

Fortunately, the Palestinian voices that have fought against the official Israeli narrative are now joined by a growing number of Jewish voices.

It is through a new common narrative that a true understanding of the past can be attained, all with the hope that the peaceful vision for the future can replace the current one — one which can only be sustained through military domination, inequality and sheer propaganda.

-Dr. Ramzy Baroud is an internationally-syndicated columnist, a media consultant, an author of several books and the founder of PalestineChronicle.com.