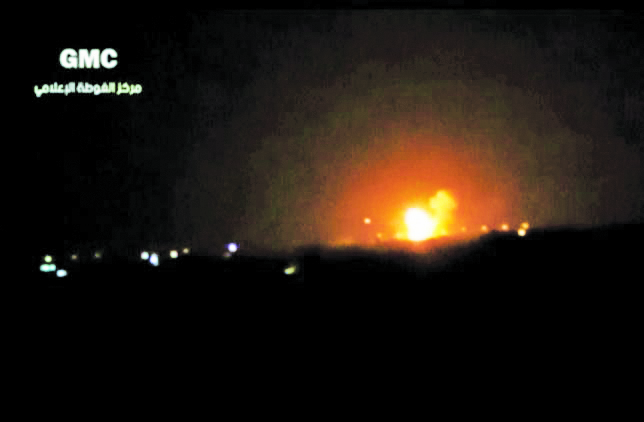 The Israeli military said later that one of its anti-aircraft missiles intercepted a target over the Golan Heights that Israeli media described as an unmanned drone.

Video carried on Arab TV and shared on social media showed the pre-dawn air strikes caused a fire around the airport east of the Syrian capital, suggesting fuel sources or weapons containing explosives were hit.

Syrian state media said Israeli missiles hit a military position southwest of the airport, but did not mention arms or fuel. It said “Israeli aggression” had caused explosions and some material losses, but did not expand on the damage.

Israel does not usually comment on action it takes in Syria. But Intelligence Minister Israel Katz, speaking to Army Radio from the United States, appeared to confirm involvement.

“The incident in Syria corresponds completely with Israel’s policy to act to prevent Iran’s smuggling of advanced weapons via Syria to Hezbollah,” he said.

Prime Minister Benjamin Netanyahu had “said that whenever we receive intelligence that indicates an intention to transfer advanced weapons to Hezbollah, we will act,” he added.

Two senior rebel sources in the Damascus area, citing monitors in the eastern outskirts of the capital, said there were five strikes on an ammunition depot used by Iran-backed militias.

Lebanon’s al-Manar television, which is affiliated with Hezbollah, said early indications were that the strikes targeted warehouses and fuel tanks. It said there no casualties.

Israel has largely kept out the war in Syria, but officials have consistently referred to two red lines that have prompted a military response in the past – any supply of advanced weaponry to Hezbollah, and the establishment of “launch sites” for attacks on Israel from the Golan Heights region.