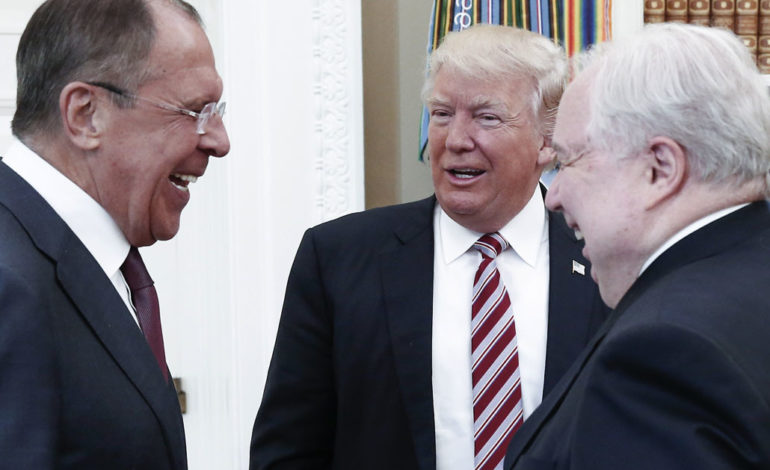 WASHINGTON ― President Trump disclosed highly classified information to the Russian foreign minister about a planned ISIS operation during their meeting last week, two U.S. officials with knowledge of the situation said on Monday.

The intelligence, both officials said, was supplied by a U.S. ally in the fight against the militant group.

The White House said the allegations were false. “The president only discussed the common threats that both countries faced,” deputy national security adviser Dina Powell said.

One of the officials said the intelligence was classified Top Secret and also held in a secure “compartment” to which only a handful of intelligence officials have access.

After Trump disclosed the information, which one of the officials described as spontaneous, officials immediately called the CIA and the National Security Agency, both of which have agreements with a number of allied intelligence services, and informed them what had happened.

While the president has the authority to disclose even the most highly classified information at will, in this case he did so without consulting the ally that provided it, which threatens to jeopardize what they called a longstanding intelligence-sharing agreement, the U.S. officials said.

“The president and the foreign minister reviewed common threats from terrorist organizations to include threats to aviation,” said H.R. McMaster, the national security adviser, who participated in the meeting. “At no time were any intelligence sources or methods discussed and no military operations were disclosed that were not already known publicly.”

During his Oval Office meeting with Lavrov and Kislyak, Trump went off-script and began describing details about an ISIS threat related to the use of laptop computers on aircraft, the officials told the Post.

In his conversations with the Russian officials, Trump appeared to be boasting about his knowledge of the looming threats, telling them he was briefed on “great intel every day,” an official with knowledge of the exchange said, according to the Post.

U.S. officials have told Reuters that U.S. agencies are in the process of drawing up plans to expand a ban on passengers carrying laptop computers onto U.S.-bound flights from several countries on conflict zones due to new intelligence about how militant groups are refining techniques for installing bombs in laptops.