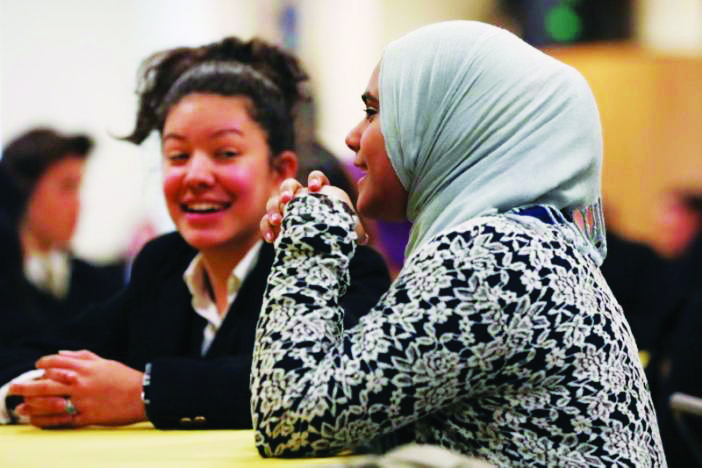 Students from the MDQ Academy Islamic School and Saint Anthony's High School during a field trip in Huntington, NY, April 26

The trip’s agenda was simple: give students whose schools are just 10 miles apart but culturally worlds away a chance to get to know each other.

It is also part of an ambitious initiative that will be adopted by nearly 80 U.S. Islamic elementary, middle and high schools starting in the fall to give Americans a better picture of U.S. Muslims at a time when many feel targeted by President Trump’s administration.

“Sometimes Muslims in today’s society are afraid of other people judging them,” Laiba Amjad, a 19-year-old senior at MDQ Academy Islamic school in Brentwood, New York, said during the visit to Saint Anthony’s High School in nearby Huntington.

“Other people are also afraid,” she said, referring to non-Muslims. “They’re thinking, ‘What if that person is an extremist?'”

“I hadn’t really interacted with many Muslims before this,” 17-year-old Chris Beirne said while he and fellow Saint Anthony’s seniors ate lunch with the visiting Muslim students.

“Muslims typically today are put into this one group with extremists,” Beirne said. “I think the solution to that problem would be having events like this.”

In an effort to overcome that perception, the Council of Islamic Schools in North America, the nation’s only accrediting agency for Muslim schools, is changing its curriculum. It will ask its 78 accredited or member schools, located across 24 states, to arrange meetings between their own students and those at other, non-Muslim schools.

The Council is asking its educators to launch more volunteer projects outside the Muslim community, attend local government meetings and create a database of alumni to track their graduates’ success.

The move comes at a time when Muslims are under intense scrutiny, largely the result of extremist attacks carried out in the name of Islam in the United States and abroad.

Mainstream Muslim religious leaders condemn the violence, saying their faith forbids it. Muslims are the second-most targeted religious group in the United States for hate crimes, behind Jews, according to the latest statistics from the Federal Bureau of Investigation.

A report by the Council on American-Islamic Relations released this month showed a 57 percent spike in the number of anti-Muslim hate crimes recorded in the United States last year compared with 2015.

In the 10 days following Election Day on Nov. 8, physical and verbal attacks against Muslims ticked up 6 percent compared to the same period the prior year, the Southern Poverty Law Center said.