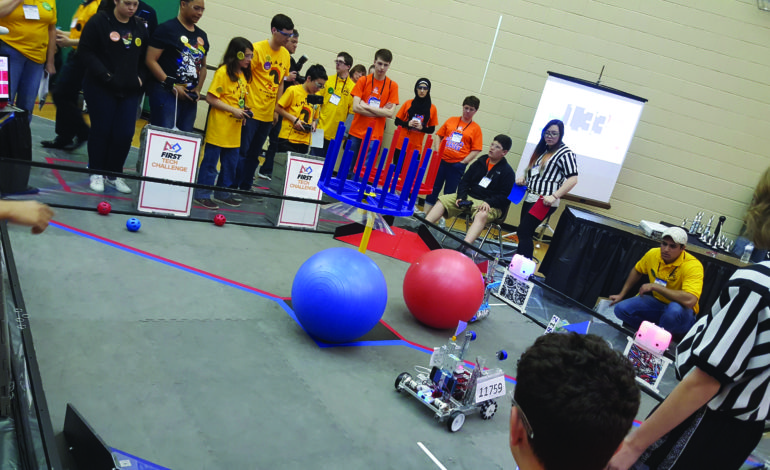 DEARBORN — If you come to Unis Middle School on a typical Saturday morning, it wouldn’t be difficult to find a parking spot.

On May 13, however, things were different. Unis hosted its debut FIRST Tech Challenge. FIRST (For Inspiration & Recognition of Science & Technology) is a K-12 program for students age 6 to 18-years-old that, in the words of its founder, Dean Kamen, “is more than robots.”

The competition focuses on robots that are built, in full, from the same universal kit given to each team. The robot must then complete tasks, determined by FIRST, in the form of a game that is changed each year.

This year’s game is called Velocity Vortex, which begins with a 30-second autonomous period. During this time, the robot navigates the field of play based on code written by the middle school’s student team. Afterward, the robots are controlled by one or two of the students, depending on their individual design, for two minutes, completing tasks and collecting points along the way.

“The robots are a vehicle for students to learn important life skills,” Kamen said. “Kids often come in not knowing what to expect — of the program nor of themselves. They leave, even after the first season, with a vision, with confidence and with a sense that they can create their own future.”

That is why Kidada Simmons— a 17-year veteran teacher— created her own team at Unis Middle School in October 2015. Simmons brought her team to a FIRST competition and when they’d returned, students asked what, exactly, they’d attended.

Their curiosity sparked an idea. Simmons would host a FIRST event, so the community and student body could witness firsthand what the program is all about.

That idea came to fruition this past Saturday. The school inspired 150 volunteers, a third of whom were students, to take a full Saturday off to work the event. Volunteers got to work transforming the middle school into an arena for the robots as early as 6 a.m. and closing ceremonies finished up just after 5 p.m.

Simmons brought together 20 schools, with 25 total teams competing in the event. Four of the middle schools were from Dearborn: Unis, STEM, Advanced Technology Academy and Oakley Best.

Throughout the day robots battled one another as songs like Nirvana’s “Smells Like Teen Spirit” blared in the background. Referees carefully calculated scores and the day played out much like a popular sporting event, complete with a riveting ending. In the final match of the day, Survivor’s “Eye of the Tiger” set the tempo as a robot took control of a beacon as time expired, gaining crucial points and shifting the match back into its team’s favor. The crowd erupted into a frenzy in the way basketball fans react to a buzzer beater.

“The day was a success before it even began,” McCollough/Unis Principal Chadi Farhat told The AANews.

He said every student competing in the event has already gained a basis of knowledge that is ever more important in our code-driven world. Collaboration and support poured in from the school board, the community, the sponsors and the superintendent, Dr. Glenn Maleyko.

“But it all began with Kidada,” Farhat said. “She brought the idea up to me; and from there, the support we have gotten has been incredible.”

According to a study by The Center for Youth and Communities at Brandeis University, “FIRST participants were: 2.7 times more likely to show gains in understanding of STEM (Science, Technology, Engineering and Math), and STEM-related impacts are also evident across all major population groups and among students from different types of communities.”

The event is already impacting the community. Simmons said that Rola Harb, a teacher at McCollough Elementary, plans to form and coach her own team based on what she saw at the event. By forming a team in the FIRST LEGO league, she will have the first of its kind in the district.

Simmons and Unis are planning on hosting another event on December 9, hoping to bring in 36 teams for that competition.