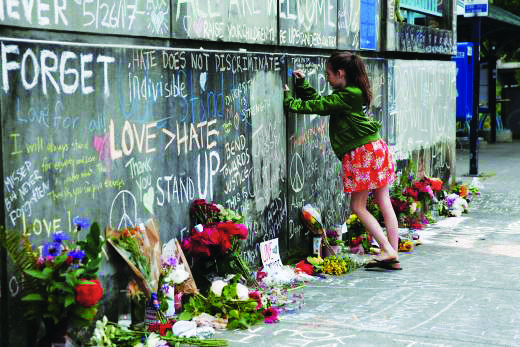 Rick Best, 53, Taliesin Myrddin Namkai-Meche, 23, and Micah David-Cole Fletcher, 21, took a brave stand against bigotry and assault last Friday when they stepped in to defend two teenage girls from the verbal assault and abuse of a bigot whose best defense was that they “looked Muslim.”

Both 16-year-old Destinee Magnum and her 17-year-old friend, who wore a hijab, were victims of an onslaught of random anti-Muslim slurs by Jeremy Joseph Christian— a Christian in none but name— that were aimed at the Muslim girl on a light-rail train in Portland, Oregon.

As the bigot spewed his hate-filled rant, Best and Namkai-Meche stepped in to intervene and deescalate the rhetorical violence with the intent of protecting the two young women from the assault.

They were fatally stabbed, while Fletcher, who subsequently stepped in to help, was wounded.

Christian is a gross exaggeration of the obfuscation of free speech and hate speech that makes this nation less free and more hateful.

He is unequivocally an American terrorist, the unemployed and uneducated ignoramus that represents the most dangerous faction operating under the American subconscious.

With a history of expressing White supremacist ideas, he is the embodiment of the extremism and terror of which he accuses Muslims.

Because of this, it’s hard to say that this tragic and violent event is truly an isolated incident.

President Trump’s condemnation of the attacks, summarized in a tweet the following Monday, saying, “The violent attacks in Portland on Friday are unacceptable. The victims were standing up to hate and intolerance”, should be welcomed, yet the divisive impact that he had upon the nation as well as the legacy of alt-right White supremacism he emboldened should continue to be condemned.

The three heroes, two dead and one in the hospital, represent the true values of a nation that heralds inclusivity, diversity and sacrifice for the greater good. They serve as a paragon of truth and justice in highly tense, divided and trying times.

The sacrifices of these three men are what make America great— a marked contrast to their attacker, who did no more than contribute to making America hate again.

Not all heroes wear capes; neither do all White supremacists wear white sheets.