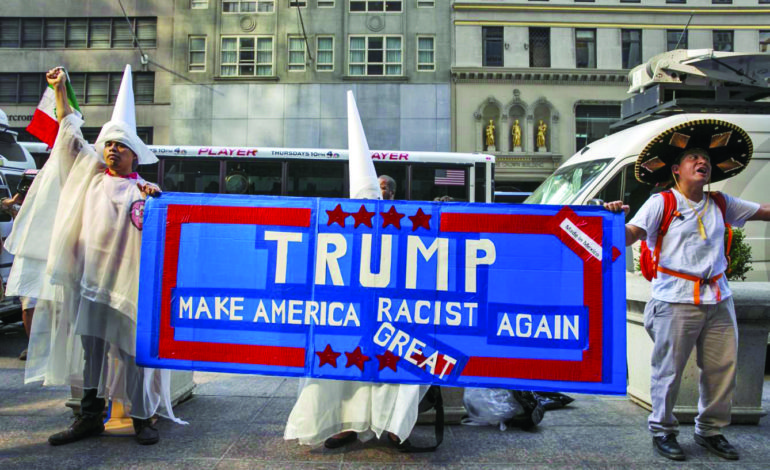 Donald Trump’s first visit abroad as president was marked by several statements which explicitly and implicitly stated that he wished to put America first. In the first leg of his trip in Saudi Arabia, he stated, “Our first priority is always the safety and security of our own citizens.”

As there definitely are threats emanating from abroad, which our president should address, his job is also to protect those who reside in America from internal threats to domestic tranquility. This not only means creating policies which protect citizens from murder and mayhem within our borders, but also includes setting the correct tone in cultivating an environment which encourages safety within civil society.

In this regard, Mr. Trump has been derelict in his duty— especially when it comes to addressing the most prolific form of domestic terror and the growing radicalization that fuels it: White supremacy. From 2007 to 2016, 372 Americans were killed at home by violent extremism. In that time frame, White supremacists murdered 54 percent of them while another 17 percent were killed by right-wing extremists. Hence dead Americans due to terrorism in our borders in the past decade were killed approximately three out of four times by men who were White supremacists and/or were professed Christians who held radical right-wing views.

In 2009, when former Homeland Security Department Secretary Janet Napolitano released a threat assessment that right-wing extremists posed a growing threat, partly due to the election of America’s first Black president, she was dismissed and rebuked by many politicans. Napolitano’s warnings have since become true.

According to the Southern Poverty Law Center (SPLC), White supremacist groups have been steadily rising. Hate groups rose from 784 in 2014 to 914 last year. Anti-Muslim groups sky-rocketed in 2016 from 101 from 34 in the prior year. Within a week of the election of Mr. Trump, there were 701 hate incidents in America, including 206 anti-immigrant and 151 anti-Black acts of rhetorical and physical violence.

There is little doubt that the president’s rhetoric during the campaign cycle added to the climate of intolerance in our nation. In fact, his rhetoric and subsequent victory were openly celebrated by the likes of the infamous White nationalist leader David Duke. Domestic radicalization has taken place where folks with racist views not only feel safe to publicly express their views more, but are also more emboldened to make them actionable including through violence.

Only a few days ago, African American U.S. Army Lieutenant Richard Collins III was murdered on a university campus in Maryland by a suspected White supremacist who was active on a Facebook group called Alt-Reich Nation. More recently, two men were stabbed to death in Portland, Oregon by a White supremacist after they stood in defense of two young ladies he’d threatened because he perceived them to be Muslims.

Our president can take to his personal twitter account and whine about how the media treats him to condemn attacks halfway across the world, but he has been about as silent as a church mouse when it comes to threats and violence perpetrated at the hands of White nationalist radicals.

If President Trump is truly serious about placing the safety and security of Americans first, it is time for him to address White supremacy and right-wing extremism in the homeland. Focusing on Daesh and Al-Qaeda to the exclusion of these internal threats does a major disservice to our nation. In fact, ignoring these internal threats places the very tranquility of our union in grave peril.