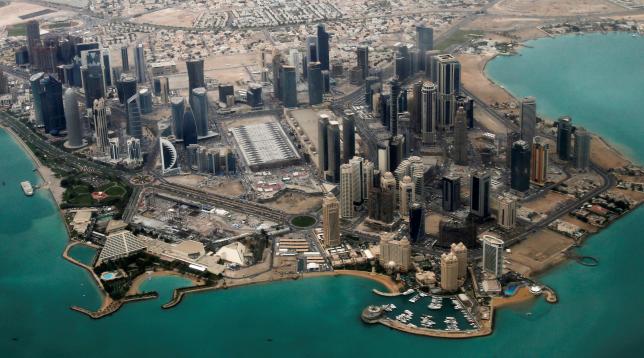 Qatar, a small peninsular nation of 2.5 million people, denounced the action as predicated on lies about it supporting militants. It has often been accused of being a funding source for Islamists, as has Saudi Arabia.

Iran, long at odds with Saudi Arabia and a behind-the-scenes target of the move, blamed Trump’s visit last month to Riyadh and called for the sides to overcome their differences.

“What is happening is the preliminary result of the sword dance,” tweeted Hamid Aboutalebi, deputy chief of staff to Iranian President Hassan Rouhani, referring to Trump’s joining in a traditional dance with the Saudi king at the meeting.

Closing all transport links with Qatar, the three Gulf states gave Qatari visitors and residents two weeks to leave, and Saudi Arabia, Bahrain and Egypt banned Qatari planes from landing and forbade them from crossing their air space.

The UAE and Saudi Arabia stopped exports of white sugar to Qatar, a potential hit to consumers during the holy month of Ramadan, when demand is high. Some residents in Qatar began stockpiling food and supplies, an expatriate said.

“People have stormed into the supermarket hoarding food, especially imported ones … It’s chaos – I’ve never seen anything like this before,” said Eva Tobaji, an expatriate resident in Doha, told Reuters after returning from shopping.

About 80 percent of Qatar’s food requirements are sourced via bigger Gulf Arab neighbors. Trade sources pointed to the likelihood of shortages growing in Qatar until the crisis eased.

Along with Egypt, however, the UAE and Saudi Arabia could be vulnerable to retaliation, being highly dependent on Qatar for liquefied natural gas.

The United States called for a resolution of the dispute soon, saying its partnerships with Gulf nations were vital.

“All of our partnerships in the Gulf are incredibly important and we count on the parties to find a way to resolve their differences sooner rather than later,” a State Department official said.

The U.S. military said it had seen no impact to its Gulf-area operations, intended mainly as a bulwark against Iran, and added that it was grateful for Qatar’s longstanding support of a U.S. presence and commitment to regional security.

The diplomatic bust-up threatens the international prestige of Qatar, which has a large U.S. military base and is set to host the 2022 soccer World Cup.

Soccer’s governing body FIFA said on Monday it was in “regular contact” with Qatar’s 2022 organizing committee but did not comment directly on the diplomatic situation.

The hawkish tone Trump brought in his visit to over 50 Muslim leaders in Riyadh on Tehran and on terrorism is seen as having laid the groundwork for the diplomatic crisis.

“You have a shift in the balance of power in the Gulf now because of the new presidency: Trump is strongly opposed to political Islam and Iran,” said Jean-Marc Rickli, head of global risk and resilience at the Geneva Centre for Security Policy.

“He is totally aligned with Abu Dhabi and Riyadh, who also want no compromise with either Iran or the political Islam promoted by the Muslim Brotherhood.”

Qatar’s backing of Islamists dates to a decision by the current emir’s father to end a tradition of automatic deference to Saudi Arabia, the dominant Gulf Arab power, and forge the widest possible array of allies.

Doha subsequently cultivated not only Islamists like America’s foes Iran, Hamas and the Taliban in pursuit of leverage, but also Washington itself, hosting the largest U.S. air base in the Middle East.

Qatar has for years presented itself as a mediator and power broker for the region’s many disputes. But Egypt and the Gulf Arab states resent Qatar’s support for Islamists, especially the Muslim Brotherhood, which they see as a political enemy.

Muslim Brotherhood groups allied to Doha are now mostly on the backfoot in the region, especially after a 2013 military takeover in Egypt ousted the elected Islamist president.

The ex-army chief and now president, Abdel Fattah al-Sisi, along with Cairo’s allies in Saudi Arabia and the UAE, blacklist the Brotherhood as a terrorist organization. The Brotherhood denies this, saying it supports only peaceful politics.

Later in the day, the kingdom shut the Saudi bureau of al Jazeera. “(Qatar) embraces multiple terrorist and sectarian groups aimed at disturbing stability in the region, including the Muslim Brotherhood, ISIS and al-Qaeda,” Saudi state news agency SPA said.

Al Jazeera says it is an independent news service giving a voice to everyone in the region.

Riyadh also accused Qatar of supporting what it described as Iranian-backed militants in the restive, largely Shi’a Muslim-populated eastern Saudi region of Qatif, as well as in Bahrain.

Qatar was also expelled from the Saudi-led coalition fighting a war in Yemen.

The state news agency in Egypt said Qatari policy “threatens Arab national security and sows the seeds of strife and division within Arab societies according to a deliberate plan aimed at the unity and interests of the Arab nation”.

Qatar denied it was interfering in the affairs of others.

“The campaign of incitement is based on lies that had reached the level of complete fabrications,” the Qatari foreign ministry said in a statement.

Turkey also called for dialogue to settle the dispute and a government spokesman said President Tayyip Erdogan was working for a diplomatic solution to the rift.

Sudan expressed its concern over the row and offered to mediate between all sides.

“The (Sudanese) foreign ministry wishes to express its deep concern over this unfortunate development between brotherly Arab states close to the hearts of the Sudanese people,” the ministry said in a statement.

A split between Doha and its closest allies could have repercussions around the Middle East, where Gulf states have used their financial and political power to influence events in Libya, Egypt, Syria, Iraq and Yemen.

The economic fallout was already hitting home as Abu Dhabi’s state-owned Etihad Airways, Dubai’s Emirates Airline and budget carriers Flydubai and Air Arabia said they would suspend all flights to and from Doha indefinitely from Tuesday morning.

Qatar Airways said on its official website it had suspended all flights to Saudi Arabia. Many Gulf airports, including in Qatar, are major hubs for international connecting flights.

Qatar’s stock market index sank 7.3 percent with some of the market’s top blue chips hardest hit and some Egyptian banks said they were suspending dealing with Qatari banks.

The measures are more severe than during a previous eight-month rift in 2014, when Saudi Arabia, Bahrain and the UAE withdrew their ambassadors from Doha, again alleging Qatari support for militant groups. At that time, travel links were maintained and Qataris were not expelled.

Al-Sabah called on Qatar’s Tamim bin Hamad bin Khalifa Al-Thani to give efforts at mediation a chance to contain differences, a few hours after Khalid al-Faisal, an adviser to the Saudi king, visited Kuwait.