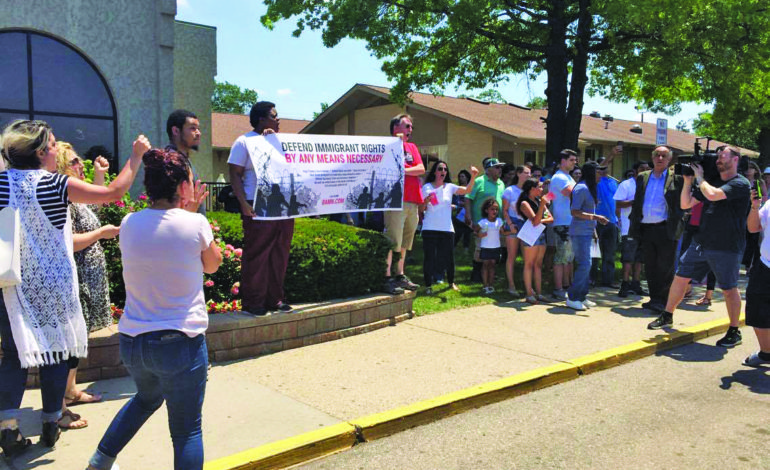 SOUTHFIELD — On Monday, June 12, dozens gathered outside the Mother of God Chaldean Catholic Church in Southfield to protest a recent wave of ICE raids that targeted, captured and detained dozens of Iraqi immigrants at multiple locations across Metro Detroit, including local churches, homes and even a hospital.

Shocked and outraged by the seizure of individuals from communities including Sterling Heights, Warren, Southfield, Oak Park and Dearborn, impacted family members rallied around the ICE detention facility in Detroit Sunday evening, where large white buses carrying the detainees were departing.

Protesters blocked a bus in an attempt to halt its transport to another detention facility.

Most of those taken into custody over the weekend are to be transported to the Northeast Ohio Correctional Center in Youngstown, Ohio before their deportation.

Friends and family of the targeted individuals said that more than 100 were rounded up and deported.

“We have around 160 in a list that we have compiled with other non profits and the ACLU,” Mark Arabo, a Califonia-based Chaldean American businessman of the Minority Humanitarian Foundation said.

ICE puts national estimates for deportation orders at 1,444 individuals, with around 199 individuals detained in the past week. Of those, 114 were detained in Michigan.

Cal of Southfield, Michigan is one of many Iraqi American Chaldeans who has called the U.S. home for nearly 40 years. Having served time for a 1993 armed robbery, he was released in 1999 and since has been a law-abiding member of society.

Many of his friends and associates, with past records as minor as marijuana possession, were part of those picked up by ICE over the weekend.

“I would be on one of those buses too,” he said. “If I didn’t run to an attorney to reopen my case.”

In a written statement to The Arab American News, ICE spokesman Khaalid Walls said that the selected were deemed eligible for removal under U.S. law.

“As part of ICE’s efforts to process the backlog of these individuals, the agency recently arrested a number of Iraqi nationals, all of whom had criminal convictions for crimes including homicide, rape, aggravated assault, kidnapping, burglary, drug trafficking, robbery, sex assault, weapons violations and other offenses,” he said.

The sweep follows the Iraq and Syria Genocide Emergency Relief and Accountability Act passed by Congress on June 6. The legislation called for the provision of emergency aid to the victims of genocide by ISIS against ethnic minorities, which include Christians, Yazidis, Assyrians and Shi’a Muslims, the latter of whom comprise a majority of Iraqis and are deemed heretics by ISIS.

Cal said that in the context of the current genocide, the Geneva convention against torture deems it unlawful to send persecuted individuals back to endangerment.

“You cannot send them to their death,” he said, adding that many of the friends and family of those detained are sure their loved ones will meet that fate if sent to Iraq.

Affected individuals are encouraged to get an attorney who’ll file a motion under the Convention Against Torture (CAT), with the threat of persecution evidenced by the Congressional bill that recognized violence against these groups.

“Until we in Congress can review all aspects of the agreement reached with Iraq, and the referenced safety measures, we urge you to hold off removal of these individuals to Iraq,” they wrote.

Salem Jiddou, principal engineer of a contracting firm, was among those in attendance at Monday’s rally.

“They were punished, they served their term in jail… and whatever fine was imposed upon them,” he said about the detainees. “Now, after 20 years of being good citizens, we are sending them to Iraq to die. What human rights is that?” The deportations follow recent negotiations between the Iraqi government and the Trump administration to remove a certain number of Americans of Iraqi origin from the country.

Sources say that the exchanges are part of an agreement to ease Iraq off of the U.S.’s travel ban.

“Reading between the lines,” said attorney George Mann, “orders from Washington [targeted] convicted criminals. But most of these people have been here for a long time and have their whole families here.”

Mann said that while some have met terms for orders of removal, which he recognizes as an often arbitrary and “blanket” designation, prior administrations have not prioritized forcibly deporting these individuals.

“Trump has never hidden his attitudes towards immigrants and people here illegally,” Mann said, noting that the administration “looks at people with orders of deportation as criminals.”

While Trump received support from the Chaldean American community, his campaign promises to protect and prioritize Christian immigrants and refugees from the Middle east were quickly eclipsed by his execution of his harsh immigration and deportation policies.

A statement released by Emgage on Tuesday called for immigration reform in the wake of the raids.

“It is imperative that local law enforcement be allowed the right to refuse to honor ICE’s detainer requests to maintain a level of trust between law enforcement and residents. Immigrants contribute heavily to our society, and have an enormous impact on our economy. Immigration reform is needed, and the separating of families must come to an end,” said Emgage Executive Director Hassan Sheikh.

“Each [deportation] will be hurting at least 100 people because Chaldeans are family oriented people,” Jiddou said. “They served their terms, they are paying their taxes and some of them are very successful business people.”

Not all of those rounded up Sunday were of Chaldean or Christian origin.

One Muslim woman, a cosmetologist who volunteers at a Livonia food bank, vehemently demanded that justice be met for her family and community after her brother was taken by ICE agents Sunday.

“They said he’d be back in two hours. Where is he?” she asked. “We are volunteers; we work here; we pay our taxes and we pay our dues…we were adopted into this country, only to be targeted.”

Representatives from the Ann Arbor/Ypsilanti Rapid Response team showed up to distribute information and instruct residents to not comply with certain ICE demands out of intimidation.

“In response to all questions, say, ‘I don’t want to talk to you without a lawyer,'” a representative from the group advised the crowd.

They additionally advised the families and friends of those detained to not have their loved ones sign anything while in custody, which they warned would “sign away their rights.”

However, attorneys and groups say that these individuals are being moved and held before they can organize or receive help.

“You wait in jail until the judge grants you a bond,” Mann said, recalling that recent cases involved individuals facing arrest before their cases forwarded to judges for bond hearings.

“Either a judge in Ohio will have to decide the bond or we would have to go represent [them] there or telephonically over a crucial bond hearing” he said.

Help and legal advice can be found at Chaldean American community centers across Metro-Detroit, including the Chaldean Community Foundation at (586) 722-7253.