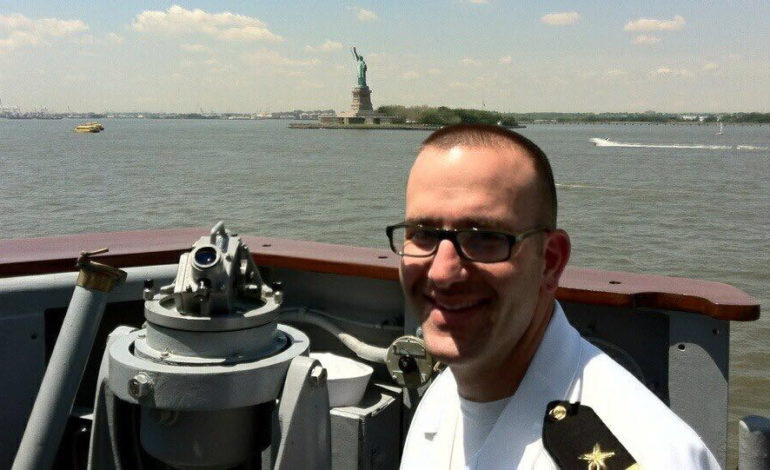 CHESAPEAKE, VA — Lieutenant Commander Houssain “Sam” Sareini of the U.S. Navy has been selected to command his own ship by the year 2020.

Born and raised in Dearborn to Lebanese parents, Sareini graduated from Fordson high school in 1993 and decided to join the Navy a year later at 18-years-old. He said he was going to college at the time, but did not see the value in it. He was more interested in working for the FBI and law enforcement, and considered the Navy to be an important way to get involved in the former. Sareini enlisted in the Navy as an operations specialist, serving on the USS Vicksburg when he deployed to the fifth fleet as part of Operation Provide Promise/Sharp Guard. During this tour, he was selected for the Enlisted Commissioning Program after earning his bachelor’s and master’s degrees in biochemistry from Iowa State University in 2002. He is currently a nuclear engineer for the Navy.

During his career, Sareini has received multiple decorations, including the Meritorious Service Medal, the Navy Commendation Medal, the Navy Achievement Medal and the Good Conduct Medal, along with various unit awards. He has served on a number of ships, with a variety of titles attached to each.

“Growing up, my father had me take Houssain with me everywhere I went,” said Dearborn City Councilman Mike Sareini of his brother. “Although I was older and sometimes wanted to do my own thing, I never minded spending time with both my brothers; it made us very close.

“It was a shock when Houssain called to tell me he enlisted in the Navy,” he added. “Throughout the years I visited every state he was transferred to, trying to give him the family support he needed. Now my brother has made it to one of the highest Naval rankings.”

Sareini recalled a tour of his brother’s ship and his father’s reaction to a particular bit of Naval protocol.

“My father was so proud when the crew would stand at attention saying, ‘Officer on deck’, saluting Houssain Toufic Sareini as we walked by,” he said. “Needless to say, my father, being a first generation immigrant from Lebanon, was filled with tears of joy. My mother, Suzanne, my brother Ali and I are very proud of his tremendous accomplishment.”

As a first tour surface warfare officer, Houssain Sareini went on to serve on the USS Hue City as the air defense officer and combat information center officer. He was instrumental in the deployment of the ship, along with testing and expeditionary strike group integration as an air defense commander.

Following nuclear propulsion pipeline training in 2005, Sareini reported to the USS Theodore Roosevelt while on station in the Arabian Gulf. He served as the reactor laboratories division officer and was then selected as the chemistry and radiological controls principal assistant and radiation health officer, a position typically held by a second tour department head. Due to his outstanding performance, Sareini was selected as COMNAVAIRFOR (Commander of the Naval Air Forces) engineering officer of the watch for 2007. After finishing his division officer tours, Sareini reported to the Naval Nuclear Power Training Command in Charleston, S.C. He served as the division director for the chemistry, materials and radiological fundamentals office for officer training.

Sareini went on to report to the USS Harry S. Truman as the reactor training assistant. He also served as the senior watch officer, leading the Truman through a nine-month combat deployment to the Arabian Gulf.

Additionally, he worked as the deputy module head for Surface Warfare in Tactical Training Group Atlantic and was chosen as the command’s 2015 instructor of the year.

He has spent 23 years in the Navy so far and, as an Arab American, his career has not been affected. He said that throughout the years, the country has become more tolerant. He was able to work his way through the ranks, starting out as an seaman apprentice.

Lieutenant Commander Sareini is currently serving as the officer in charge in the Atlantic Sealift Operations Support Element (ASOSE) in Norfolk, Va. He is married to Wendy Weissend; they have four children, Muhammad (18), Renna (16), Ali (14) and Yasmeen (9) and currently reside in Chesapeake, Va.

Last December, Sareini was selected to take command of his own ship. He has started training on the pipeline as an executive officer in order to gain further knowledge for when he takes command.