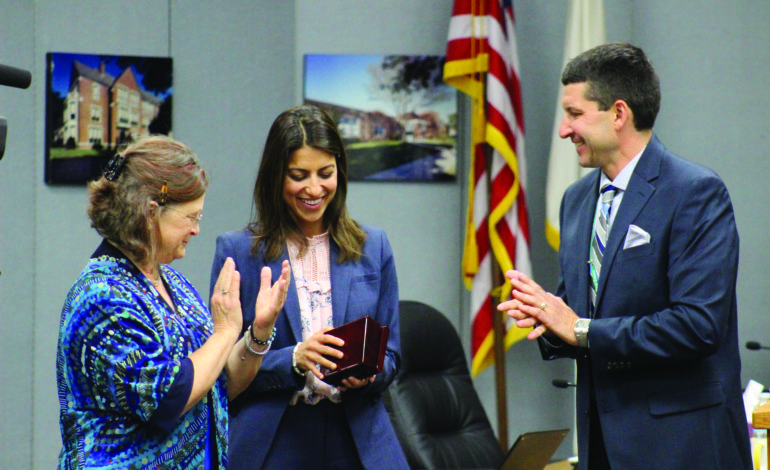 DEARBORN — The Dearborn School Board held a farewell ceremony in honor of former President Mariam Bazzi, June 26, before the newest trustee, Celia Nasser, was sworn in.

Bazzi served as the president of the Dearborn Board of Education and chair of Henry Ford College’s Board of Trustees until her May 22 resignation after Gov. Snyder appointed her as Wayne Country Circuit Court judge.

Her colleagues, some teary eyed and conciliatory, spoke to an audience of community members, students and her children about their respect for her and the role she played in ensuring the district enjoys top-tier schools.

Dearborn Schools Superintendent Glenn Maleyko attributed a large part of the schools’ success to Bazzi’s dedication during her tenure. He pointed to the district’s high graduation rates, continual hiring and top national ranking by the National AfterSchool Association

He then presented Bazzi with an award as a token of appreciation for her service.

Board President Mary Lane said she somewhat panicked when she heard of Bazzi’s possible appointment to the bench.

Lane added that Bazzi always knew what to say, knew what action was needed at the time and could “sense the tenor of people.”

“I know it’s best for you, I know its best for people seeking justice, but I was really sad,” Lane said.

Trustee Michael Mead praised Bazzi and highlighted her high emotional intelligence and the importance of such a trait of character in making people successful.

Bazzi thanked the board members for their commitment to education and Lane for her guidance while she was on the board and her command of a heated process to appoint a new trustee.

“The leadership I’ve seen in the past few weeks has been exceptional,” Bazzi said.

Following Nasser’s swearing in during that meeting, Bazzi told The AANews she is enjoying her new position as a circuit court judge, although it has been challenging.

Bazzi said the board remains the same team, even without her, but that the addition of Nasser is a positive one.

“I really hope that the board can move past some of their differences and come together collectively,” she said. “Because it is their job to put students first, and I hope that’s what they will do.”

Bazzi also offered some advice for Nasser: Listen to what people have to say and make rational and objective decisions.

She explained that the trustees’ jobs are to ensure the district’s mission is being executed, to hold the superintendent accountable, but not to get involved in day to day operations.

Bazzi added that serving as a trustee was “one of the highlights of [her] career”, because of the great academic success Dearborn students have achieved.

When asked about what she believes the board needs to address, she said overcrowding at the schools is a concern that needs to be tackled quickly.

“The trustees need to come together and do what’s in the best interest of the students,” she said. “They have to be careful about not just looking at issues specific to one school but must consider the entire district and make decisions that are fiscally responsible”.