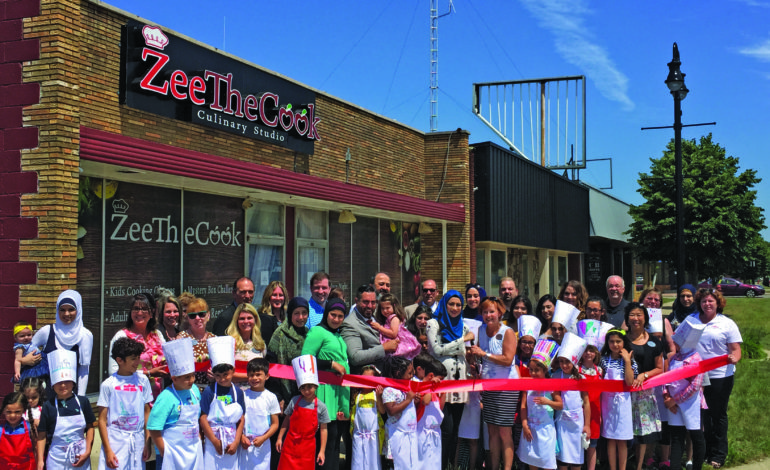 A group photo of children learning the culinary arts - Photo by Stephen Martin, The AANews

It also offers adults a variety of culinary experiences.

From 9 a.m.-3 p.m. Mondays through Fridays this summer, Shami and her assistants will be leading a summer camp for children. Some classes are offered from 9-12, others from 9-3. Prior to the grand opening on Wednesday, Shami and her assistants were leading one of the camps, preparing dishes and putting some last-minute touches on the studio before representatives from the Dearborn Area Chamber of Commerce arrived.

Dearborn Heights Mayor Daniel S. Paletko had also been scheduled to appear, but he later told the AANews he wasn’t able to attend due to a personal matter.

The mayor’s absence didn’t put a damper on the festivities, even though the children asked each person who walked through the door, “Are you the mayor?”

As they enjoyed meat and cheese pies, guests’ eyes lit up as they looked around the newly remodeled culinary studio.

Shami said the remodeling process was a long one that combined what had once been a pizzeria and a music studio. When the music studio moved down the street, Shami had a few walls knocked down to create ZeeTheCook out of the two buildings.

As stated on the culinary studio’s website, the mission of ZeeTheCook is “to educate, excite, and empower students to expand their minds and enhance their taste-buds while tapping into their creative selves.” The hands-on cooking classes revolve around fresh ingredients, safety and fun.

Shami said she is a “CEO one minute and a janitor the next”, as children scurried past her in the kitchen about an hour before the ribbon-cutting ceremony.

She began her culinary career on Instagram in late 2012, posting pictures of food she would make in her own kitchen.

Shami, a self-described workaholic, has been teaching culinary classes since 2015. She came to the realization that there was a market for her culinary skills after people on social media repeatedly asked her for her recipes.

She found it difficult to provide written recipes because she didn’t measure when she cooked.

Before work on the studio was finished, Shami stayed busy teaching classes at local restaurants and supermarkets, as well as holding birthday parties.

The day after the grand opening, the studio did not slow down. On July 6, ZeeTheCook hosted Dearborn Mayor Jack O’Reilly Jr. for “Cooking with the Mayor @ ZEETHECOOK.” Kids aged 5-16 had the opportunity to chop, measure, mix and cook with the mayor.

In the inaugural commercial for the studio, a father is interviewed about his son taking classes. When he asks his son why he likes cooking, the boy replies that he wants to be a pharmaceutical scientist and mixing things together is fun.

“The boys enjoy our classes more than the girls,” Shami had previously told the AANews. “The reason I feel they do is because in many cultures boys aren’t always introduced to this. They kind of try to lead the boys away from these things. Once they have a chance to expand their creativity and their minds in the kitchen, it’s just so exciting for them that someone is allowing them to do that.”

Shami is part of a minority in Michigan. According to National Women’s Business Council, as of 2012 there are 306,986 women-owned business in Michigan. Of those, 90.8 percent have no employees other than the owner.

Shami reflected on her work on Facebook prior to the grand opening ceremony.

“I’m such a baby, I’ll be crying all day,” she wrote “… It’s easy to be so busy and determined that you have no time to reflect on all the success you’ve achieved; but once you stop to take it all in… the tears of happiness, relief and victory just start flowing… So thankful to God for this special & monumental day in my life.”

ZeeTheCook is located at 24736 W. Warrant St. in Dearborn Heights, about a quarter of a mile west of Telegraph.