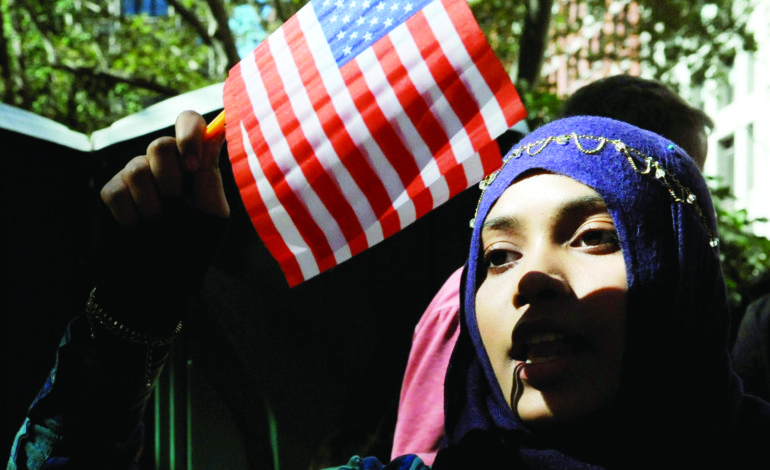 WASHINGTON, D.C. — On July 25, the Pew Research Center released a report on Muslim Americans and their concerns regarding their place in society; despite the data showing high concern from U.S. Muslims, 92 percent of them are proud to be American.

The survey was conducted between January and May. It showed that half of Muslim Americans said they experienced religious discrimination, or know someone who has, in the past year. Also in the past year, 49 percent of U.S. Muslims received expressions of support for being Muslim. Richard Cohen is the president of the Southern Poverty Law Center

“After the election we saw a tremendous surge of hate incidents,” said Richard Cohen, the president of the Southern Poverty Law Center (SPLC). “We counted almost 900 [hate incidents] in the first 10 days after the election, and many of them were aimed at persons who were Muslims or perceived to be Muslims.”

The Pew study stated that 68 percent of U.S. Muslims say President Trump makes them feel worried; 74 percent believe the president is unfriendly toward Muslims; 65 percent do not approve of how Trump is governing the nation and 62 percent of Muslim Americans don’t see Islam as part of mainstream society.

“I think that the fear in the Muslim community is unfortunately justified,” Cohen said. “Last year, we saw a trickling in the number of anti-Muslim hate groups, going from about 34 [hate groups] in 2015 to 101 last year. And the incendiary political climate in our country, which Mr. Trump bares a tremendous responsibility for, is perhaps the primary cause of that.”

While more than a majority of U.S. Muslims are worried and concerned about their place in society, most Muslim Americans are proud to be American; 80 percent stated that they are “satisfied” by how things are going in their lives, and 70 percent believe simply working hard can help them get ahead.

“The contrast between the patriotism of the Muslim community and the suspicion with which they are held in many quarters, particularly in the White House, is quite stark,” Cohen said. “Many immigrant communities— who tend to be the most patriotic, the most law-abiding— are seen still as ‘the other.’ And it’s a characteristic, unfortunately, that the Muslim community shares with other minority communities in our country.

The contrast between the patriotism of the Muslim community and the suspicion with which they are held in many quarters, particularly in the White House, is quite stark.

Cohen also said Trump should apologize for his role in energizing the movement; that he should fire White House Chief Strategist Steve Bannon to demonstrate that he’s changing direction and he must undo the damage he’s caused.

“There are many, many heroic figures in the Muslim community,” Cohen said. “We have many Muslim friends at Muslim Advocates. We stand in solidarity with them.” Rashida Tlaib, a former Democratic state representative and director of community partnerships and development at Sugar Law Center, said one of the best ways of describing how many U.S. Muslims feel today is “rejected.”

“We feel this is our home,” said Tlaib, the first Muslim Arab woman elected to the state legislature. “This is where we’re raising our children. However, we are constantly pushed aside on even civil rights issues, equality issues, which is creating a tremendous amount of anxiety. And that is why so many are completely silent.”

“When it comes to LGBTQ issues and the Black Lives Matter movement in our country, all those movements, I have seen such a huge rise of Muslimeen getting involved,” Tlaib said. “And in some ways it has been a blessing to kind of see this solidarity work happen… Just as much as we are worried about the Muslim ban, we are also pushing and fighting back on the wall.”

Equality Michigan Executive Director Stephanie White said she wasn’t surprised to see that Muslim acceptance of homosexuality was two times the rate of other groups surveyed in the Pew study.

“Any group of people who are thoughtful and inquisitive and have a value system are going to continue to see their fellow humans for who we are,” White said, “and [will] want to understand and want to grow.”

An anonymous graduate student at Western Michigan University (WMU) also told The AANEWS she wasn’t surprised to find Muslims more accepting of homosexuality. The student identifies as a queer Muslim, and her thesis is about how queer Muslims use the Internet for building resilience and social gathering.

“Since Muslims don’t have a space in the LGBTQ community where their Muslim identity gets to be on an even playing field,” the student said about the reason queer Muslims are the subject of her thesis. “And then you obviously don’t have support groups at the mosque for queer youth.”

The student said her research found that the more educated Muslims were the more accepting of homosexuality they would be. She said she’s somewhat skeptical of the Pew study, overall, because she believes it is difficult to obtain accurate samples on Muslim Americans or Arab Americans. Stephanie White is the executive director of Equality Michigan

Another notable part of the survey stated that in 2006, 23 percent of White Evangelical Christians were accepting of homosexuality, and that in 2016 the number had only increased 11 percent.

Seventy-two percent of White Evangelical Christians are shown in the survey to believe that there is natural conflict between Islam and democracy. This group was also the most intolerant of homosexuality, among the groups surveyed.

A section in the report notated testimonies from U.S. Muslims regarding discrimination. The authors shared the experience of an anonymous Muslim woman under 30.

“I have definitely experienced both [discrimination and support],” the woman told Pew researchers. “I’ve had people make comments, and of course they’ll give me weird looks and things like that. But I’ve definitely heard people [make] rude comments straight to my face. I’ve also had people say really nice things about my hijab, or say it’s beautiful or say they think my religion is beautiful.”

An anonymous Muslim woman over 60 told the authors that in her 15 years of living in America, she never experienced negativity due to her religion.

Tlaib said that despite the concerns coming from U.S. Muslims, there is a sense of optimism when it comes to the Islamic faith; that Muslims typically lean toward faith when they have fear and anxiety, as well as toward being humble, even if they’re victims.

For the full report by the Pew Research Center visit www.pewforum.org/2017/07/26/findings-from-pew-research-centers-2017-survey-of-us-muslims.