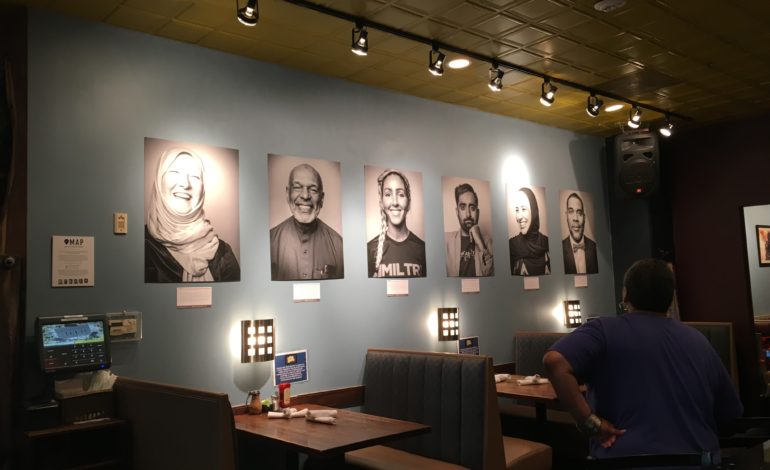 Busboys and Poets is a well-known restaurant, bookstore and lounge. MAP photos are up in multiple Washington, D.C. locations

This was a myth that the Muslims for American Progress (MAP) project powered by the Institute for Social Policy and Understanding (ISPU) was able to debunk.

“We kept hearing that rumor,” said MAP Principal Investigator Rebecca Karam about Muslim physicians in Michigan. “They are actually 15 percent.”

The MAP project is a study that shows the contributions Muslims have made to society in Michigan.

In June, The AANews reported on the MAP photo narrative series that was unveiled alongside the research. The series depicts personal stories from Michigan Muslims who were part of one of the 10 MAP categories.

The start of the report includes a statement that Thomas Jefferson taught about an educated citizenry as a means for the nation’s survival as a free people.

“If ‘an educated citizenry’ is vital to the health of our democracy then providing accurate information on Muslim Americans is a civic duty.”

Karam said MAP offers a window into the Muslim American life, which is separated from ideas of violence or extremism.

“Right from the formulation of this project, our findings differ from how Muslims are portrayed in the media,” she said.

The report also stated that more than 80 percent of media coverage of Islam and Muslims in the U.S. is negative.

In the section on philanthropic giving, the researchers found that Michigan Muslims donated $177 million to charity in 2015. Also, they noted that 45,300 articles of clothing and 1,307,226 pounds of food were donated to charity.

“There were lots of different philanthropic aid we didn’t expect that was really unique and thoughtful,” Karam said. “That went beyond the typical donations.”

She said a unique characteristic her team found when it studied Muslim philanthropic giving was that some organizations were not tracking their charitable giving. From this, the team created a contribution recording form for tracking donations for organizations to use.

“One of the stereotypes in the South Asian and Arab community is that everyone is a doctor or engineer,” MAP Project Manager Sarrah Buageila said. “What we had found was that Michigan had so many firsts in this country.”

Buageila said Michigan had the first and second Muslim mayors in the nation. The first was Al Haidous in Wayne in 2001; the second was Marcus Mohammed, who was elected in 2015 in Benton Harbor.

“We also found out that the first Muslim judge in the country was also here, Adam Shakur,” said Buageila.

Near the end of the report there is a list of all the Muslims holding public office in Michigan.

Another notable point in the report was that there was an increase in political and civic organization participation among Muslim communities after 9/11.

The case study on contributions by Michigan Muslims to people affected by the Flint water crisis showed that not only were Muslims the first to break ground in replacing lead pipes with copper pipes, but that Muslims donated and distributed more than 1 million water bottles.

Since the release of the report and photo narratives, ISPU has been presenting its research and portraits in different locations.

One such event was hosted in Dexter, Michigan at the end of June.

“The event was at an Episcopal church,” Karam said. “The event was fantastic and had an incredible turnout. It [Dexter] is a small town in Michigan.”

Karam said an organic conversation began after the presentation between the locals and Muslim Americans who were in attendance.

“They asked really thoughtful questions about how they can be better allies to Muslim Americans,” Karam said. “And just in general about faith.”

About 70 people attended the event, held in the church’s basement.

“One of my favorite parts of the evening was that a woman attended who was mad about the event because Muslims were being given a platform to their religion,” Buageila said. “But she showed up and stayed through the whole thing. The vibe in that room that evening was warm and welcoming.”

Currently, the photo narratives are on display in Washington, D.C. at multiple Busboys and Poets Restaurants. The venues are known for having a bookstore inside and also for its themes of inclusiveness and social justice.

Buageila said the MAP team noticed a spike in visitors to the MAP site after the photo series went on display in D.C.

The city of Plymouth invited the MAP team to present its key findings and portraits for an evening discussion at the Plymouth Cultural Center on September 20. The portraits will be on display and open to the public at Plymouth City Hall September 18-20.

A group in Alpena, a small town with a population of roughly 10,000 people, invited ISPU to present this fall.

After MAP researchers finish duplicating their study in New York City next year, they will begin a photo presentation across the nation titled “Heartland America.” The details about this project have yet to be released.