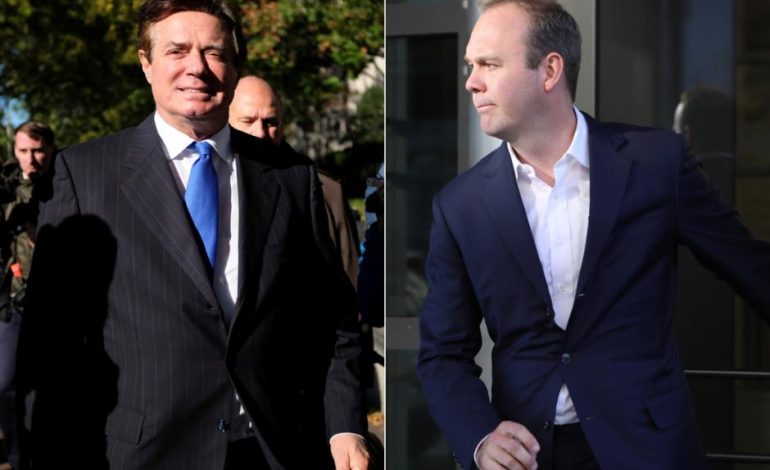 A third former Trump adviser, George Papadopoulos, pleaded guilty in early October to lying to the FBI, it was announced on Monday.

It was a sharp escalation of U.S. Justice Department Special Counsel Robert Mueller’s five-month-old investigation into alleged Russian efforts to tilt the election in Trump’s favour and into potential collusion by Trump aides.

Manafort, 68, a longtime Republican operative, and Gates were arraigned at a federal courthouse in Washington.

Both men pleaded not guilty to the charges in a 12-count indictment, ranging from money laundering to acting as unregistered agents of Ukraine’s former pro-Russian government.

The judge ordered house arrest for both men, and set a $10 million (7.57 million pounds) unsecured bond for Manafort and a $5 million unsecured bond for Gates. With unsecured bonds, they are released without having to pay but will owe money if they fail to appear in court. There will be another hearing on Thursday.

The developments in the Mueller probe weighed on the U.S. dollar, which slipped 0.5 percent against a basket of currencies.

Mueller’s investigation and others by congressional committees into alleged Russian efforts to influence the election have cast a shadow over Trump’s first nine months in office.

Neither Trump nor his campaign was mentioned in the indictment against Manafort and Gates. The charges, some going back more than a decade, centre on Manafort’s work for Ukraine.

The indictment includes accusations of conspiracy against the United States, failure to report foreign bank accounts to the U.S. government and conspiracy to launder money, a count that carries a 20-year maximum prison sentence.