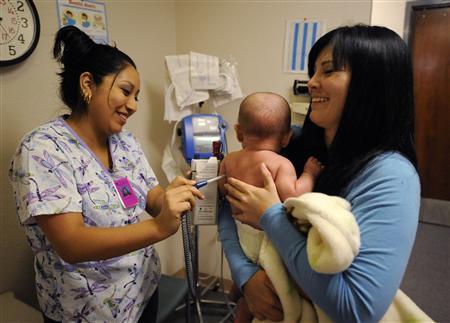 Low-income children in the U.S. whose parents qualified for Medicaid were more likely to receive preventive care, regardless of their own insurance coverage, a new study finds.

Children whose mothers and fathers were enrolled in Medicaid, government insurance for the poor, were 29 percent more likely to receive at least one well-child visit, a just-released Pediatrics report showed.

“Any discussions about restricting Medicaid eligibility for adults should also take into account the potential for impacts on the healthcare use of low-income children,” Venkataramani, a pediatrician and internist, said in a phone interview.

The Affordable Care Act enlarged the pool of Americans eligible for Medicaid in some states. But many Republican lawmakers have pushed to roll back the Medicaid expansions.

Medicaid typically has different eligibility criteria for children and adults, Dr. Matthew M. Davis, pediatrics professor at the Feinberg School of Medicine at Northwestern University in Chicago, writes in an accompanying editorial.

He estimates that 11 million parents who have no health insurance live in households with children who do have coverage.

“On the basis of decades of evidence of the benefits of parental coverage for children,” he writes, it is time for public programs to “offer coverage to parents of children on Medicaid at the same income eligibility thresholds that are applied to their children.”

“If there is bipartisan sentiment that children deserve coverage that safeguards their health and wellbeing, then covering their parents can be an evidence-based way to maximize the value of that coverage,” he said.

Venkataramani and her team analyzed more than 50,000 pairs of low-income parents and children between 2001 and 2013. Parental Medicaid enrollment affects whether children from 2 to 17-years-old got well-child visits regardless of the children’s insurance coverage, they found.

The finding surprised Laura Wherry, professor at the David Geffen School of Medicine at the University of California, Los Angeles, who was not involved with the study.

“When the authors control for a child’s health insurance status, their estimates still reveal a significant relationship between parental Medicaid eligibility and the receipt of well-child visits,” she said by email. “This suggests that there must be other explanations for why parental Medicaid coverage leads to an increased use of preventive care by their kids.”

“It would be great to better understand these other mechanisms,” she said. “And I’d be very interested to see a follow up study looking at this.”

Despite the well-established benefits of well-child visits, American children’s receipt of this form of preventive care, particularly children in low-income households, has been “persistently suboptimal,” the authors of the new report write.

One third of 3 to 6-year-olds and more than half of 12 to 21-year-olds covered by government insurance programs for low-income families failed to get an annual well-child visit in 2015, Venkataramani said.

The new study demonstrates that “the generosity of state Medicaid eligibility policies for parents can have important consequences for their kids, in addition to affecting the parent’s own health insurance status and well-being,” Wherry said.