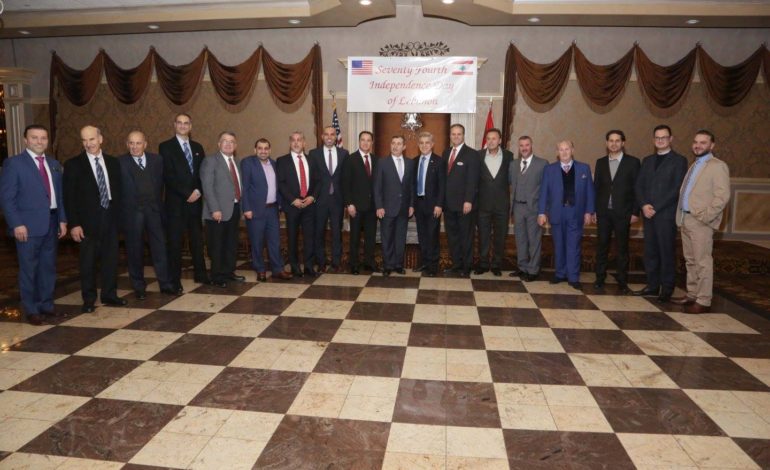 DEARBORN — Coinciding with tensions calming in Lebanon as Prime Minister Saad al-Hariri returns home and holds off on his resignation, Lebanese Americans celebrated their social, economic and political leverage on the 74th anniversary of their homeland’s independence day. The ceremony, hosted by the Consulate General of Lebanon in Detroit at Byblos Banquet Hall, began with the Lebanese national anthem and a welcome speech by Hameed Dakroub, a local attorney, expressing the strong relationship between nationals, expatriates and the motherland. He also praised “the effective efforts of Lebanon’s Consul General Bilal Kabalan for serving the community.”

Kabalan attributed Lebanon’s strength to the unity of the Lebanese people and the convergence of national issues, stressing that “the recent weeks proved that Lebanon is a strong country and able to meet challenges of all kinds.”

“For the first time since Lebanon’s independence (1943), the Lebanese people are strong, the army is strong, the resistance is at its strongest and more capable than any other time to respond to Israeli attacks and threats,” Kabalan said.

“The secret behind Lebanon’s strength is unity. I hope that this unity will be reflected in your community so that you can send your voices to your representatives in Washington and tell them that maintaining Lebanon’s stability is a key issue in this region and the Mediterranean.”

He congratulated activists on registering Lebanese expatriates for the country’s May parliamentary elections and urged Americans of Lebanese origin to reclaim their Lebanese citizenship.

He stressed the importance of involving Arab American youth in institutional work and providing them opportunities for leadership positions in associations and organizations to express their opinions, attitudes and perspectives on key issues.

“Many of our young people leave the region to other cities and states and take their needed participation with them,” he said.

Kabalan said he will return to Lebanon on the first week of December and will be replaced by the new consul general, Susan Mozi. He called on the Lebanese community in Metro Detroit to support Mozi “in the same way you supported me.”