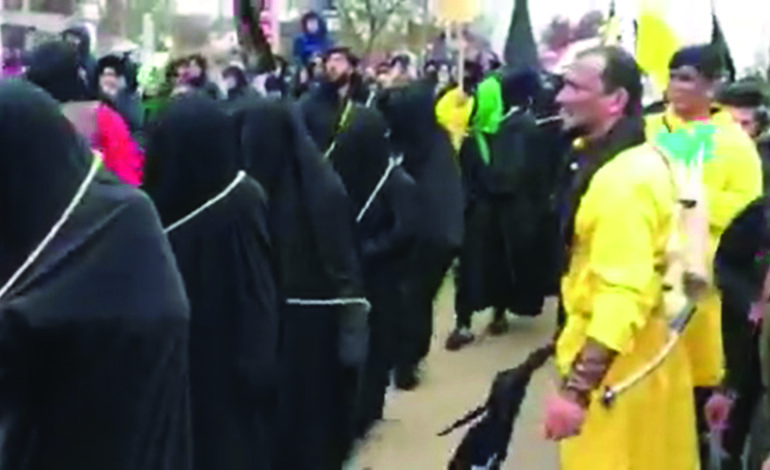 DEARBORN — Preserving heritage as well as cultural and religious practices have been the undertaking of generations of Arab and Muslim Americans.

But as the heat intensifies due to the nation focusing its magnifying lens on the “Arab capital of America”, a recent “religious” reenactment held in the city’s streets has local Muslim leaders reflecting on doing things differently.

On Nov. 12, thousands filled Warren Ave. and marched for miles in commemoration of Imam Hussein, Prophet Muhammad’s grandson and a highly-esteemed Muslim leader who was martyred in battle fighting against injustices in Iraq in 680 C.E.

It marked 40 days, the “Arba’een” following Ashura, during which Shi’a Muslims around the globe annually organize processions and mourn his martyrdom using black flags and light taps, or beatings on the chest as an expression of sadness.

The march’s organizer in Dearborn, the Karbalaa Islamic Education Center, a mainly Iraqi congregation, was criticized last year for using sinister and perplexing imagery. Amid accusations of Sharia Law running Dearborn, some thought that thousands in black clothing, marching with black flags and beating themselves to be self-defeating and would propagate negative stereotypes about Muslims.

It’s important that we be proud to show our faith and not be ashamed to share aspects of who we are. But given the rise of Islamophobia, we should be more aware of how we present and articulate our message to educate others. -Suehaila Amen, activist

So this year, procession participants held colorful flags and banners that wrote messages like “Muslims stand against ISIS” in an effort to make their message clearer to public, Husham Al-Husainy, head of the Karbalaa Center, told The AANews.

By standing with Imam Hussein, demonstrators were standing against today’s injustices, he said.

Nonetheless, the group received harsher criticism this year when their efforts were sabotaged by a “rogue” handful of demonstrators who appeared to be part of the larger procession.

The reenactment in Dearborn featured women covered in black clothes, “chained” to each other with rope and being “beaten” by men with whips.

A video of the performance posted on social media garnered a great deal of discussion. Many Muslims strongly criticized it, saying it misrepresents their faith and is “embarrassing.” Others defended the event and their right to religious freedom.

“One should consider the political climate we’re in before taking on a form of protest,” said Abe Dakkoush, an Arlington, Texas-based attorney originally from Dearborn. “How do you not consider right wing propaganda and Islamophobia? Who sanctioned this?”

Facebook user Mo Ray-Zack commented, “This gruesome portrayal of women in all black with ropes around their necks pulled like slaves has nothing to do with the liberating message of Islam. This footage is the kind of hate material Fox News would use to say to the American public: ‘Can’t you see how Muslims behave?'”

Bill Barker, a non-Muslim Dearborn resident said, “There is nothing wrong with educating [the] public or sharing your history in a public forum. I am always very interested in history and culture. But I do believe some better explanation (in English) as to what it is, or how it is currently viewed.”

The point of the procession was to promote peace and condemn terrorism and hatred, which were made clear using 20 banners. We also recently organized blood drives and, this year, seven patients who benefited sent us thank you cards. -Husham Al-Husainy, Karbalaa Islamic Education Center

Suehaila Amen, a local Arab American activist, told The AANews she participated in the Oct.1 Ashura march, with demonstrators who had a well-organized and clear message, but was “flabbergasted” after seeing footage of the Nov. 12 Arba’een reenactment.

“It’s important that we be proud to show our faith and not be ashamed to share aspects of who we are,” she said. “But given the rise of Islamophobia and federal leadership perpetuating negative stereotypes against Muslim Americans, we should be more aware of how we present and articulate our message to educate others.”

Amen said she commended the group’s efforts in sharing its traditions with the public, but urged Muslims to focus on the social justice aspect of Imam Hussein’s legacy, instead of telling a minor and “devastating” portion of the story without context.

He blamed local Muslim leaders for being irresponsible in their preaching and for provoking tensions among Muslims and hostility from non-Muslims.

“The imams in our community don’t do their jobs correctly,” he told The AANews. “Instead, they fuel exaggerated religious stories, so they can take advantage of followers and gain support.”

Alsanjari suggested that such reenactments be held inside mosques, not on the streets where bystanders are likely to take them out of context.

“We represent Islam in the United States, so we have to act in ways that reflect the true values of the faith, and not to bring up such historic and tragic events during heated times.” Following the controversy, several local Islamic leaders, including Al-Husainy as well as The AANews Publisher Osama Siblani, met at the Islamic Institute of Knowledge to discuss ways to reform some religious practices like the Ashura and Arba’een processions. They brainstormed ideas, including Siblani’s suggestion of holding the reenactment at a local mosque or theatre, and organizing blood and food drives for those in need.

Speaking to the sheikhs, Siblani criticized the processions as acts that work against the best interest of Muslim Americans, who have worked hard in recent decades to clear their distorted images.

He added that demonstrations and protests that do not have a clear message have little to no impact on producing desired change, and most of the time self-defeating.

Ones that are hard to understand and fail to clearly display context, like the reenactment, also ward off Arab American families and youth from staying in Dearborn. He pointed to Warren Ave., a symbol of Arab American success in the early 80s, and its dwindling economic potential in recent years.

At the meeting, Al-Husainy told The AANews the demonstrators were part of a separate organization and were not authorized by the city. Nor did they notify the Karbalaa Center of their intention to participate in the procession.

He claimed he was “shocked” when the group snuck into march, adding that there were so many people, he couldn’t control the situation.

However, Al-Husainy also said he and five Muslim youth used a megaphone to condemn the reenactment performance and to speak out against oppression around the world and war in the Middle East.

“The point of the procession was to promote peace and condemn terrorism and hatred, which were made clear using 20 banners,” Al-Husainy said. “We also recently organized blood drives and, this year, seven patients who benefited sent us thank you cards.”

He promised to work hard to prevent such activities in the future and added that he would investigate and find out who was behind the reenactment and threatened to sue them if they demonstrated with his group again.