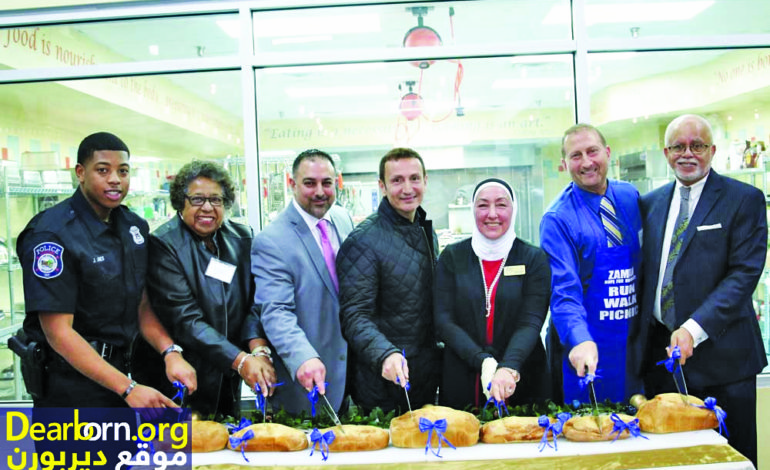 INKSTER — Zaman International’s Hope for Humanity Center, a humanitarian organization for women and children in extreme poverty, added to its services December 4 with the addition of a culinary arts training program.

The program will offer cooking classes, beginning in January, to the women as well as the community. In addition to the classes, the state-of-the-art kitchen will also be available to rent. The cooking classes will provide more food to the organization’s program, Hot Food Pantry, which delivers nightly food to clients who cannot provide it for themselves.

Najah Bazzi, founder of Zaman International, told the AANews she estimates the kitchen will help that program boost its impact from several hundred families to perhaps thousands. “She is doing unbelievable work in this organization. I told her, ‘you prayed and God answered through me.'” -Hussein Siblini, co-owner of Yasmeen Bakery

Bazzi credited the creation of the kitchen to Hussein Siblini, co-owner of Yasmeen Bakery.

“This was a ways away from us,” Bazzi said in a speech at the grand opening. “Three years, maybe, in our strategic planning. This wasn’t going to happen for a while. Because we didn’t have the budget or even the know how at the time, but we had the vision. I said to him [Siblini], ‘well there’s this culinary arts kitchen thing that’s in our vision, but I can’t help you; I can’t raise the money for it; I can’t really do anything, but if you want to do it it’s up to you. And he said, ‘I’ll do it.'”

She added that Siblini raised $110,000, singlehandedly.

Siblini told The AANews he called the businesses around Yasmeen Bakery and told them, “This is for a good cause.” He said that thankfully they trusted him to donate. Some donated $10,000, while quite a few donated $5,000, he said. He said he targeted mostly businesses, but after exhausting those resources members of the community stepped up too.

“I am just a solider in her army,” Siblini said of Bazzi at the grand opening. “She is doing unbelievable work in this organization “I told her, ‘you prayed and God answered through me.'”

Zaman International began helping families in poverty in 1996, out of Bazzi’s van. She continued to work out of the van until 2010 when Zaman was moved to a modestly sized office space. However, since 2015 Zaman has been operating inside of the “Hope for Humanity Center”, a building that is almost eight times the size of the previous space, according to the website.

The organization accepts monetary donations as well as clothes/goods donations. The donations, “provide hope to marginalized women and children through basic needs assistance and skills training.”