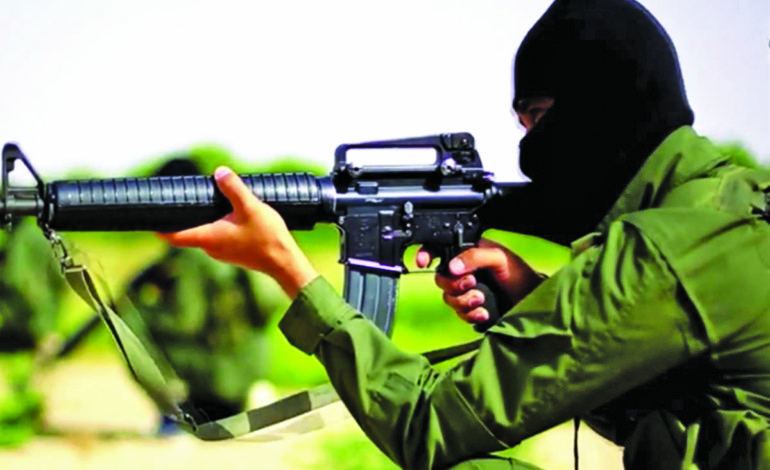 Screengrab of a video released by ISIS showing a training camp where fighters use weapons, including American-made M16 rifles

The study stated that ISIS’s possession of these weapons remains a threat to the forces still operating against the terror group in Iraq and Syria.

The arms included anti-tank weapons purchased by the United States that ended up in possession of ISIS within two months of leaving the factory, according to the study by Conflict Armament Research, an organization that tracks arms shipments. The study was funded by the European Union and the German government.

“In summary, evidence collected by [Conflict Armament Research] indicates that the United States has repeatedly diverted EU-manufactured weapons and ammunition to opposition forces in the Syrian conflict,” the study says. “[ISIS] forces rapidly gained custody of significant quantities of this materiel.”

Efforts by the United States and other countries to supply weapons to rebel and opposition groups in Syria and Iraq “have significantly augmented the quantity and quality of weapons available to ISIS militants,” the report concluded.

The study examined 40,000 weapons and other items recovered from ISIS during the last three years. The terror group has been retreating across Iraq and Syria as government forces and their allies in both countries have routed it from its strongholds.

The report cites an ISIS propaganda video showing militants with weapons captured last year from the New Syrian Army, an alliance of fighters battling the forces loyal to the Syrian President Bashar Assad.

It has long been known that ISIS captured a huge amount of American weapons —including tanks and artillery — when the militant group swept into Iraq from Syria in 2014 and routed several divisions of Iraqi soldiers, many of whom abandoned their weapons and fled.

The new study raises questions about a different source for weapons: arms secretly sent to rebel factions fighting forces loyal to Syrian President Bashar Assad in Syria’s long civil war. The covert CIA program, begun by the Obama administration in 2013, was ended earlier this year by President Trump. Saudi Arabia, which — like the U.S. — strongly opposes Assad, also supplies weapons to the opposition groups that eventually landed in the hands of ISIS and their affiliates.

The findings highlight the risk of introducing weapons into a civil war, where it is difficult to track the arms or control how they are ultimately used.

Many rebels backed by the U.S. were overrun by extremists like ISIS, which was growing in power in 2013 through 2015.

The covert program arming anti-Assad rebels is separate from the Pentagon’s publicly acknowledged operation to arm the Syrian Democratic Forces (SDF), an alliance of Kurds and Arabs fighting ISIS, but not Assad. That program has continued and the SDF has successfully pushed militants from Raqqa, an ISIS strongholds in Syria.

The report did not find any evidence of SDF weapons falling into ISIS’ hands, as was the case with anti-Assad rebels. The Pentagon has said it carefully tracks weapons it provides to the Syrian Democratic Forces.

Most of the weapons secretly sent to factions in Syria were purchased by the United States and Saudi Arabia from arms manufactured in Eastern Europe. The U.S. government contracts with private companies who make the overseas purchases.

That’s necessary because most militants in Iraq and Syria use AK-47s and rocket-propelled grenades made in former Soviet bloc countries or China. Those weapons are not compatible with most U.S.-manufactured ammunition and other supplies.

Some weapons were diverted to Syria, even though the U.S. or Saudi Arabia may have signed a contract not to transfer the weapons after purchasing them, the report indicated.