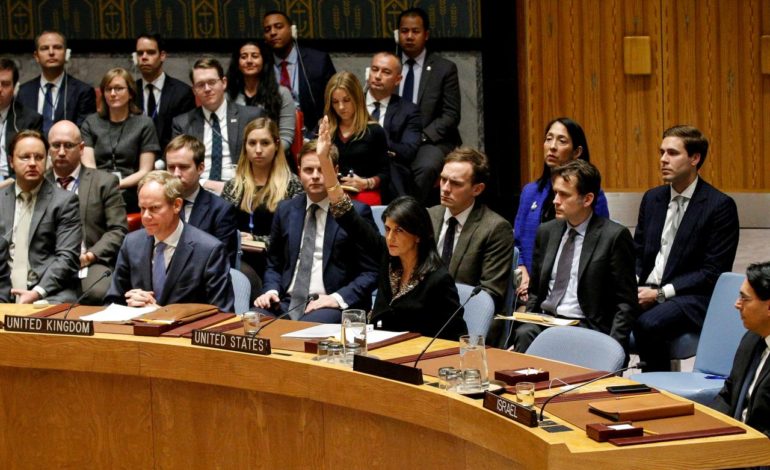 U.S. Ambassador to the United Nations Nikki Haley vetos an Egyptian-drafted resolution regarding recent decisions concerning the status of Jerusalem, during the United Nations Security Council meeting on the situation in the Middle East, including Palestine, at U.N. Headquarters in New York City, New York, December 18/ REUTERS

UNITED NATIONS — More than 120 countries defied President Trump on Thursday and voted in favor of a United Nations General Assembly resolution calling for the United States to drop its recent recognition of Jerusalem as Israel’s capital.

Trump had threatened to cut off financial aid to countries that voted in favor. A total of 128 countries backed the resolution, which is non-binding, nine voted against and 35 abstained. Twenty-one countries did not cast a vote.

Trump’s threat appeared to have some impact, with more countries abstaining and rejecting the resolution than usually associated with Palestinian-related resolutions.

Nevertheless, Washington found itself isolated as many of its Western and Arab allies voted for the measure. Some of those allies, like Egypt, Jordan and Iraq, are major recipients of U.S. military or economic aid, although the U.S. threat to cut aid did not single out any country.

Earlier this month, Trump reversed decades of U.S. policy by announcing the United States recognized Jerusalem — home to major Muslim, Jewish and Christian holy sites — as the capital of Israel and would move its embassy there.

“The United States will remember this day in which it was singled out for attack in the General Assembly for the very act of exercising our right as a sovereign nation,” U.S. Ambassador to the U.N., Nikki Haley, told the 193-member General Assembly ahead of Thursday’s vote.

“We will remember it when we are called upon to once again make the world’s largest contribution to the United Nations, and so many countries come calling on us, as they so often do, to pay even more and to use our influence for their benefit,” she said.

The status of Jerusalem is one of the thorniest obstacles to a peace deal between Israel and the Palestinians, who were furious over Trump’s move. The international community does not recognize Israeli sovereignty over the full city.

Netanyahu described the resolution as “preposterous.” “Jerusalem is our capital, always was, always will be. But I do appreciate the fact that a growing number of countries refuse to participate in this theater of the absurd,” he said a video on his Facebook page.

Israel captured East Jerusalem in a 1967 war and Palestinians want it as the capital of a future state they seek.

Australian U.N. Ambassador Gillian Bird said Australia wanted to see the United States continue to play a leadership role in brokering peace and abstained from the vote because, “We do not wish to see any party isolated from the process.”

According to figures from the U.S. government’s aid agency USAID, in 2016 the United States provided some $13 billion in economic and military assistance to countries in sub-Saharan Africa and $1.6 billion to states in East Asia and Oceania.

The General Assembly vote was called at the request of Arab and Muslim countries after the United States vetoed the same resolution on Monday in the 15-member U.N. Security Council.

The remaining 14 Security Council members voted in favor of the Egyptian-drafted resolution, which did not specifically mention the United States or Trump but which expressed “deep regret at recent decisions concerning the status of Jerusalem.”

The resolution adopted on Thursday “affirms that any decisions and actions which purport to have altered, the character, status or demographic composition of the Holy City of Jerusalem have no legal effect, are null and void and must be rescinded.”

The U.N. action comes a year after the Security Council adopted a resolution demanding an end to Israeli settlements.

That resolution was approved with 14 votes in favor and an abstention by former U.S. President Barack Obama’s administration, which defied heavy pressure from longtime ally Israel and Trump, who was then president-elect, for Washington to wield its veto.

After Thursday’s vote, a spokesperson for the U.S. mission to the United Nations said: “It’s clear that many countries prioritized their relationship with the United States over an unproductive attempt to isolate us for a decision that was our sovereign right to make.”