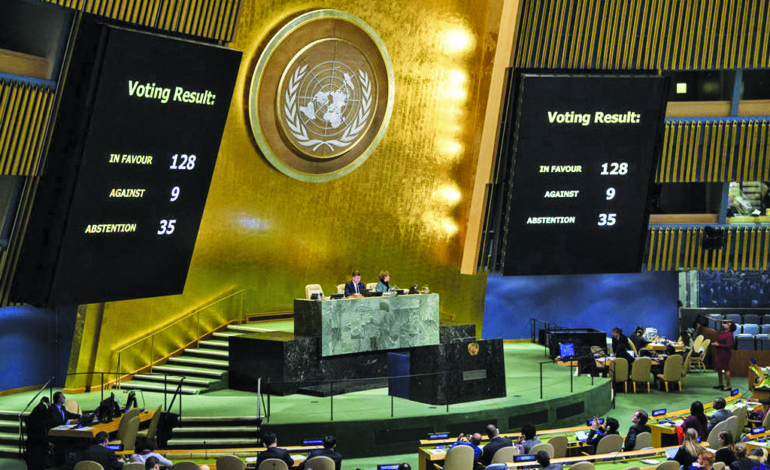 Panels in the General Assembly Hall show the final vote count about the resolution condemning the U.S. decision on Jerusalem during an emergency special session

The brilliant diplomacy over Jerusalem of the self-proclaimed master deal-maker has produced a situation where it is now D. Trump vs. almost the entire world. And in the face of what is likely to be a sweeping defeat for the U.S., Trump and his minions are not taking the reluctance of the world to go along with his whims at all well.

U.S. ambassador to the U.N. Nikki Haley wrote member states of the U.N. that she had been ordered to report back on those countries that vote in favor of a U.N. General Assembly (UNGA) resolution opposing his action over Jerusalem, adding in a tweet, “the U.S. will be taking names.” Meanwhile, Trump threatened to cut off aid to states that vote for the resolution.

“We’re watching those votes,” he said. “Let them vote against us. We’ll save a lot.”

Trump is openly trying to bully the entire world to bow to his will. Global hegemony has rarely been exercised so nakedly.

This latest display of childish pique when things do not go Trump’s way provides an extraordinary spectacle. The U.S. has employed arm twisting, threats and pressure myriad times during its reign as the world’s leading super power. Such tactics, for instance, were deployed in 1947 when the U.N. adopted UNGA Resolution 181, known as the Partition Plan. In the days before the vote, lobbyists friendly to the U.S. swamped several countries with phone calls, letters and visits to pressure them to vote in favor of the resolution. These included several small countries that could only with difficulty stand up to U.S. coercion: Liberia, Ethiopia and Haiti, among others. Similarly, when the UNGA accorded Palestine Non-Member Observer State status in 2012, the U.S. ensured that an opposing vote was cast by small countries completely within its sphere of influence such as Palau, Nauru and Micronesia. At the time, only nine states followed the U.S. lead and the resolution passed with overwhelming global support.

The difference today is that such tactics are no longer employed discreetly behind closed doors. Trump is openly trying to bully the entire world to bow to his will. Global hegemony has rarely been exercised so nakedly. But paradoxically, in spite of this storm of bluster and threats, which are designed— like nearly all else Trump does— primarily to feed the xenophobia of his domestic base, never has U.S. global hegemony seemed so precarious.

Rarely has the action of an American president on the Middle East been so universally unpopular outside the bubbles of Israeli and American public opinion. And even in the U.S. there is much unease about this move, leading to a deterioration of the situation on the ground in the region and a further degradation of the global prestige and influence the U.S. has enjoyed. By his arrogant threats, Trump has further deepened that unpopularity and increased the nagging doubts worldwide about his basic competence to manage American foreign policy.

This latest Trumpian tantrum is likely to prove highly counterproductive. Countries that might have succumbed to the usual quiet American-Israeli pressure tactics may now be too embarrassed to do so. The U.S. has often been isolated globally over the Palestine issue in the past, and by bringing further attention to a move that has already been condemned by a Security Council majority of 14-1 (the negative vote cast by the U.S. constituting a veto), Trump is isolating his country even further.

Meanwhile, those Middle Eastern leaders who have nailed their flags to Trump’s mast while rushing to normalize their relations with Israel at the expense of the Palestinians should be having serious second thoughts about the wisdom of their choices. If that is the case, it is another silver lining in the clouds of Trump’s infamous decision on Jerusalem.

-Rashid Khalidi is the editor of the Journal of Palestine Studies.