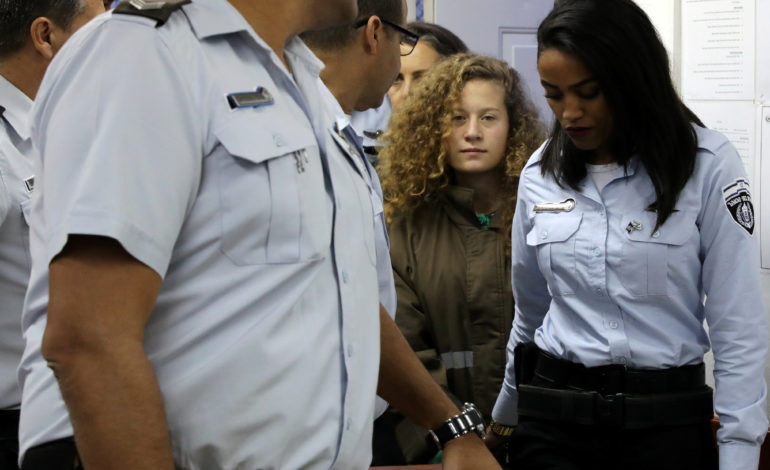 The Dec. 15 incident in the occupied West Bank was captured on video and posted on the Internet, drawing attention on both sides of the Israeli-Palestinian divide. Ahmed Tibi, an Arab member of the Israeli parliament (R), gestures as he chats with Palestinian teen Ahed Tamimi (C) at the military court in Ofer Prison near the West Bank city of Ramallah, December 28/ REUTERS

Palestinians hailed the teenager, Ahed Tamimi, as a hero. Israelis debated whether the officer, who along with another soldier was also kicked by her, had done the right thing by opting not to strike back.

The incident occurred at the entrance to Tamimi’s family home in Nabi Saleh, a village in the West Bank, during what the army said was stone-throwing at soldiers. Weekly protests against Israeli settlement policy have been held there for years.

The military said in a statement that the officer “acted professionally” but right-wing Israeli politicians described his behavior as humiliating.

Three days after a video clip of the confrontation was broadcast on Israeli television, Tamimi – who can be heard on the video clip shouting at the soldiers to leave – was arrested.

At Thursday’s hearing, in a military courtroom in Ofer prison near the Palestinian city of Ramallah, prosecutors said they intended to indict the teenager on charges that include aggravated assault and insulting a soldier.

Prosecutors asked the court to extend her detention for several days to give them time to prepare the charge sheet.

Tamimi made news two years ago when she was pictured biting a soldier who tried to arrest her younger brother.