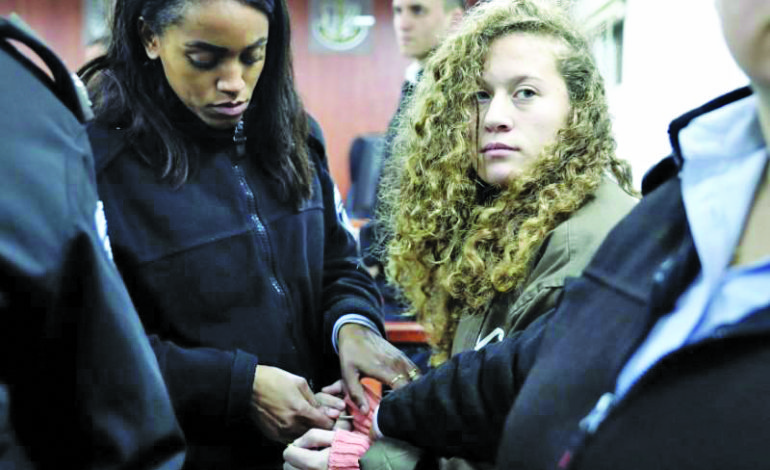 Where were the international calls for compassion, the reminders that this was a potentially traumatized child?

Everyone now knows that 16-year-old Ahed Tamimi slapped an Israeli soldier. How many of us know about the events that led up to this? Telling half of a story can be more of an injustice than fabricating the entirety; and in this instance it most certainly is.

The viral video of Tamimi attempting to hit Israeli soldiers was reportedly the reason for her subsequent arrest and detention. Now let’s consider the background context to this video: Soldiers had apparently parked themselves on Tamimi’s family’s land shortly after their colleagues shot her 14-year-old cousin in the face with a rubber bullet and fired tear gas at their house, smashing windows. Her family says she was merely expressing legitimate protest at this treatment.

Living in fear of this sort of treatment remains the reality for 21st century Palestinians, without whose freedom Nelson Mandela observed that all of humanity’s freedom is incomplete. The U.N. Security Council deems Israeli settlements “a flagrant violation under international law”, and the sad reality for Palestinians is a life deprived of healthcare, an economy, a justice system, living in abject poverty with no food or water security and military violence against them and their children.

What we see in the widely circulated video of Ahed Tamimi slapping a soldier is the response of a bereaved, oppressed child – a child who is now being condemned and abused across social media. Context is important. A little bit of knowledge can be a dangerous thing.

Take a moment to picture a 16-year-old you know being raised in a country where violence and military occupation is the norm, where she is sometimes unable to access food, water and healthcare. Would they not be in pain and frustrated and angry with the unfairness of the situation? Now picture their home being raided and them witnessing a younger cousin being shot in the head by a soldier. Would they not attempt to remove the soldiers from their front lawn, as Tamimi did? Would they not become even more distraught when the soldiers refuse? Would they not, perhaps, lash out?

When an unarmed child is prosecuted for slapping a larger grown man in army gear equipped with a gun, it’s time to ask questions.

I saw no #IAmAhed. No uproar from feminist groups or international political recognition as there was for Malala, another child who lived in a country where oppression is often the norm. Instead of Nobel Prizes and invitations to meet presidents, Ahed Tamimi remains in Israeli detention, having been labelled “dangerous.”

Our compassion and humanity for children growing up with the psychological wounds of living in a conflict zone apparently do not stretch so far as to accommodate girls like Ahed. Apparently, the brutality that Palestinians face is too politically complex and messy to render this strong, beautiful girl fully human. But it’s more important than ever that, when we look at the pictures of this teenager in handcuffs, we see her for the child she really is. Don’t tell me the courthouse is where she belongs, and don’t tell me that international condemnation rather than understanding and compassion is what she deserves.

-This opinion appeared first at www.independent.co.uk.