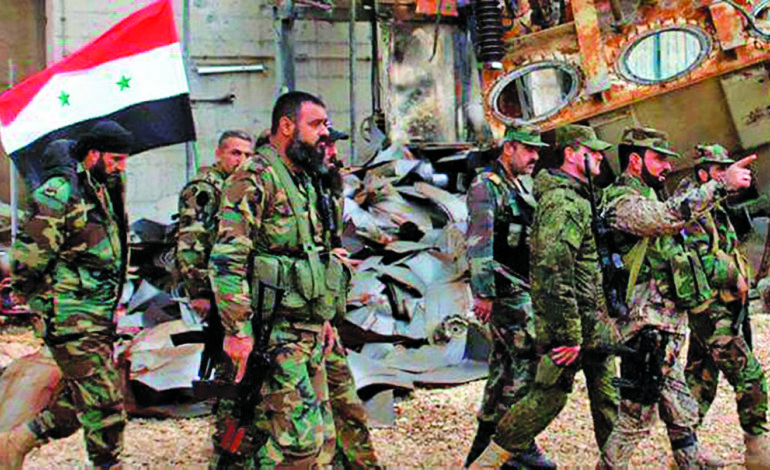 Idlib province is the biggest chunk of Syria still held by rebels fighting the Syrian army, with a population swollen by Syrians who have fled the violence in other parts of the country. The Syrian army has defeated rebels in many parts of western Syria with critical help from Russia and Iran.

The recent military escalation in western Syria has included an unprecedented attack by a squadron of drones on Russian military bases and has cast a shadow over Moscow’s efforts to convene a Syria peace congress later this month.

The Hezbollah media unit said the Syrian army and its allies were repelling a “fierce assault” by the Nusra Front, formerly al Qaeda’s affiliate in the Syrian war, and factions linked to it.

Syrian troops and allied forces absorbed the attack and regained control of some positions they had withdrawn from, it said.

Rebels fighting under the banner of the Free Syrian Army (FSA) said in a statement they had set up a joint operations room to repel the offensive and take back areas seized by the government in northeastern Hama and southern Idlib.

“The operation is to hit the belly of the regime deep into liberated territories and to encircle their advancing forces,” said Abdul Hakim al Rahamon, a senior official in Jaish al Nasr, an FSA faction taking part.

Tahrir al-Sham (HTS), an alliance led by the Nusra Front, the dominant force in Idlib, said it had already made gains.

“With Allah’s blessings we drew plans and prepared ourselves and are encircling them,” said Abu al Naji, a commander from Tahrir al Sham. “We have killed many.”

Rebels said they had captured some 15 villages and seized 60 government fighters. A Syrian military source denied this and dismissed rebel talk of a counter attack as propaganda. The source said fierce battles were however underway in the area and army advances were continuing.

Rebel sources said warplanes had struck Khan Sheikhoun and Saraqeb, two major population centers in Idlib province that are among several towns that have been targeted in the latest offensive.

The latest push by the army and its allies has alarmed Turkey, which has been deploying forces inside northern Idlib and setting up bases which it says are part of agreements with Iran and Russia over a de-escalation zone in Idlib.

In Istanbul, Turkish President Tayyip Erdogan reportedly spoke by phone with Russian President Vladimir Putin on Thursday and urged him to use his influence to stop Syrian army attacks on its opposition in northern Syria if he wants peace negotiations to succeed, Turkish presidential sources said.

Turkey has been fiercely opposed to Syrian President Bashar al-Assad during his country’s six-year-old civil war, but has recently been working with his allies Russia and Iran for a political resolution to the conflict.

The three countries had agreed last year to establish a “de-escalation zone” in the opposition-held Idlib province and surrounding region, which borders Turkey.

Turkey called the Russian and Iranian ambassadors to its Ministry of Foreign Affairs on Tuesday to ask the envoys to urge the Syrian government in Damascus to end the border violations in the Idlib de-escalation zone.

Russia’s Defense Ministry had asked the Turkish military on Wednesday to tighten control over armed groups in Idlib after two groups of drones attacked Russian bases on Jan. 6.

Syrian state media, citing a foreign ministry source, said on Thursday the Syrian army is fighting to “liberate from the terrorism of the Nusra Front and the other terrorist organizations that belong to it.”

Putin: We know who was behind the attack on our bases in Syria

Meanwhile in Moscow, Putin said it is known which “provocateur” was behind a drone attack which targeted Russian military bases in Syria earlier this month.

Putin added that he spoke to Erdogan and that Turkey had nothing to do with the attack, which the defense ministry has said took place overnight on Jan. 6. using thirteen armed drones.

“The explosive material in question is produced in a variety of countries, including in Ukraine,” RIA quoted major general Alexander Novikov as saying.

On Tuesday, a Kremlin spokesman said Russia has enough forces remaining in Syria to withstand possible attacks on its bases.

“That contingent that remains, the military infrastructure that remains, at the Hmeimim and Tartus military bases, they are completely capable of fighting these occasional terrorist acts,” spokesman Dmitry Peskov told reporters in a conference call.