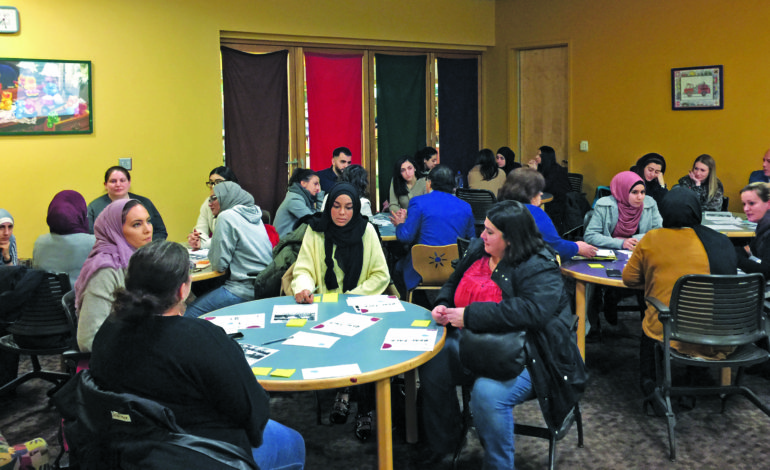 DEARBORN HEIGHTS — Women’s activist Dana Mohammad is working to form the Dearborn Heights Commission on Women and Girls. The commission would be the first of its kind in the state, according to Mohammad, who held a meeting at the Caroline Kennedy Library on Jan. 25 to gauge support, brainstorm ideas and raise awareness about the proposed ordinance to create the commission.

The commission, if accepted by the Dearborn Heights City Council, will make policy recommendations to the local, state and federal elected officials on women’s issues. “Having a commission of women working together on women’s issues is going to very impactful,” Mohammad, a senior at the University of Michigan-Dearborn, told The AANews. “There is no city commission like that in the entire state of Michigan.”

Mohammad, who said the lack of female representation in Dearborn Heights and the country’s current political climate led her to create the commission, acknowledged the Michigan Women’s Commission, created in 1968, but said there are no commissions for any specific city.

The MWC has 15 members who are appointed by the governor for a three-year term. The duties of the commissioners, according to the state’s website, are: “Attend four all-day meetings per year, perform committee work between meetings, at times attend speaking engagements, attend events and report back to the commission and solicit input from commissioners.”

The new Dearborn Heights commission is meant to empower women and girls on a variety of fronts, but would be working with other non-profits in the area so that resources aren’t being wasted working on the same problem.

Mohammad said there’s going to be a need for the things the commission wants to do.

“And there’s definitely going to be an assessment of that need before we launch any programs,” she said.

She also said the commission hopes to have an effect on a range of human rights issues for the women of Dearborn Heights and the surrounding communities.

After a presentation about the creation of the ordinance and the general plans for the commission, the attendees broke into several small groups, which were instructed to brainstorm and write down issues and possible solutions.

They came up with more than 20 issues and solutions. Mohammad recorded the notes and said they’ll be added to the long list of to-dos for the commission.

She said she hopes the commission can educate the community about sexual consent, sexual assault, the gender wage gap and a variety of healthcare-related issues, among others.

Mohammad brought the idea of the commission to Hicks-Clayton because she’s worked with her in the past. Hicks-Clayton helped Mohammad create the draft of the ordinance to create the commission and is now finalizing the ordinance with city lawyers before it’s brought to the City Council on Feb. 13.

The Council will likely vote on the issue roughly two weeks after that.

“We want to encourage you to reach out to the City Council members,” Hicks-Clayton told the attendees at the meeting. “Because they are the ones who will vote and decide this for you, for us, for the community.”

Mohammad said the commission will have nine adult women on the board and five girls under the age of 18. All board members will need to be Dearborn Heights residents.

The board will make decisions on where to allocate the commission’s resources.

“A lot of times older women are trying to make changes for girls,” Mohammad told The AANews. “To be honest, we’re too old for that. We don’t know what the needs are right now for girls in high school.”

She said the five younger board members will bring a fresh perspective to the commission and it will get them involved in city government at a young age.

“You don’t have to be a college student to be working on change in your community,” she said. “We want to encourage girls to be involved at a younger age, so that by the time they’re in college, or trying to get a job, they’re already well connected and they already have the tools and resources and they’ve empowered themselves to create positive change.”