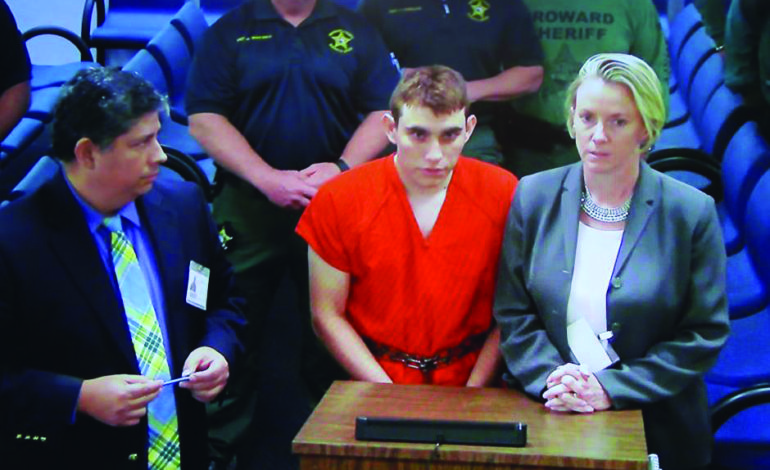 Nikolas Cruz (C) with his public defender at a bond court hearing after being charged with 17 counts of premeditated murder, in Fort Lauderdale, Florida, Feb. 15 - Photo by Reuters

PARKLAND, FL — The Federal Bureau of Investigation was warned last year about an ominous online comment by the 19-year-old man accused of killing 17 people at his former high school but was unable to locate him, an agent said on Thursday.

Authorities said the ex-student, identified as Nikolas Cruz, walked into the Marjory Stoneman Douglas High School in Parkland, near Miami, on Wednesday and opened fire with an AR-15-style assault rifle in the second-deadliest shooting at a public school in U.S. history.

Cruz may have left warning signs on social media in the form of a comment on a YouTube video that read “I’m going to be a professional school shooter.” That comment troubled the person whose video Cruz commented on, Mississippi bail bondsman Ben Bennight, who passed it on to the FBI, according to a video he posted online late Wednesday.

Wednesday’s shooting was the 18th in a U.S. school this year, according to gun control group Everytown for Gun Safety. It stirred the long-simmering U.S. debate on the right to bear arms, which are protected by the Second Amendment of the Constitution.

President  Trump addressed the shooting in a White House speech that emphasized school safety and mental health while avoiding any mention of gun policy.

“It is not enough to simply take actions that make us feel like we are making a difference,” Trump said at the White House. “We must actually make that difference.”

Cruz had participated in paramilitary training with a Florida White nationalist militia called the Republic of Florida, a leader of the group said.

Authorities said Cruz wore a gas mask as he stalked into the school carrying a rifle, ammunition cartridges and smoke grenades. He then pulled a fire alarm, prompting students and staff to pour from classrooms into hallways, according to Florida’s two U.S. senators, who were brief by federal authorities.

He loved guns and had been expelled for unspecified disciplinary reasons, police and former classmates said.

Cruz made a brief appearance in court on Thursday. Dressed in an orange prison jumpsuit and with his hands shackled to his waist, he kept his eyes directed on the ground while he was ordered held without bond. He spoke only two words, “Yes, ma’am,” when the judge asked him to confirm his name.

People who live on same street as Cruz said he alarmed them by shooting squirrels and rabbits in the neighborhood as well as chickens being raised in a nearby backyard. Several times a year, they observed law enforcement officials at his house.