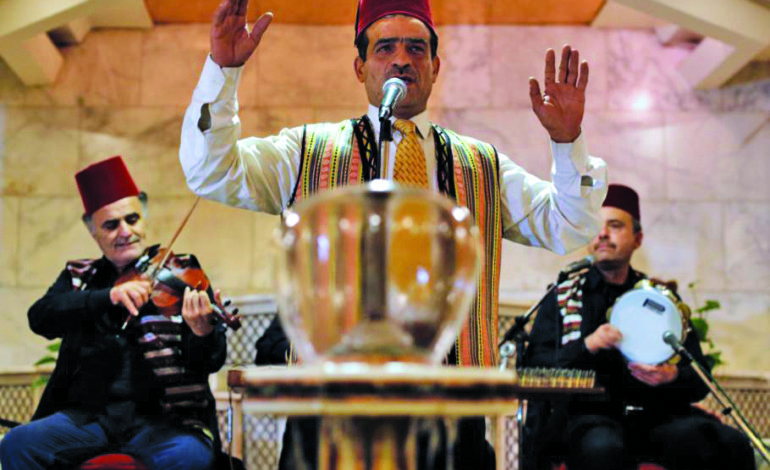 Ahmed Khayata gestures as he sings Qoudud at a hotel in Aleppo, Syria, Feb. 8 - Photo by Reuters

ALEPPO, Syria — Traditional musicians in Syria’s Aleppo say their art is flourishing again 13 months after fighting in the city ended, as new students learn the techniques of “Qoudud” singing.

At the National Choral Institute in Aleppo, singing coach Ahmed Kedah said he has between 30 and 50 pupils, including both school children and university students. The Qoudud style has a long history in Aleppo and is famous across Syria,

Kedah lost one son in the war. Another son, 10-year-old Aiham, eagerly demonstrated his own musical skills on the song “You have died.”

Syria’s conflict, which began in 2011, has killed hundreds of thousands of people and driven millions from their homes. Aleppo was divided for years between zones held by the government and the rebels, and swathes of its historic center were destroyed.

The fighting in Aleppo ended in December 2016 when the army, backed by Russian jets and Shi’a militias supported by Iran, overran the rebel sector after months of siege and bombardment.

“Shells were falling on us, but despite that the students weren’t late coming to practice,” he said.

Some musicians had to flee the war. Ahmed Khayata, dressed in traditional garb for a concert at a big Aleppo hotel, said he had been displaced nine times during the fighting and had to work as a taxi driver and vegetable seller in the market.

“My house has gone… everything I own. And I swear to God there are students we teach for free despite being in the gloomiest of circumstances,” he said.