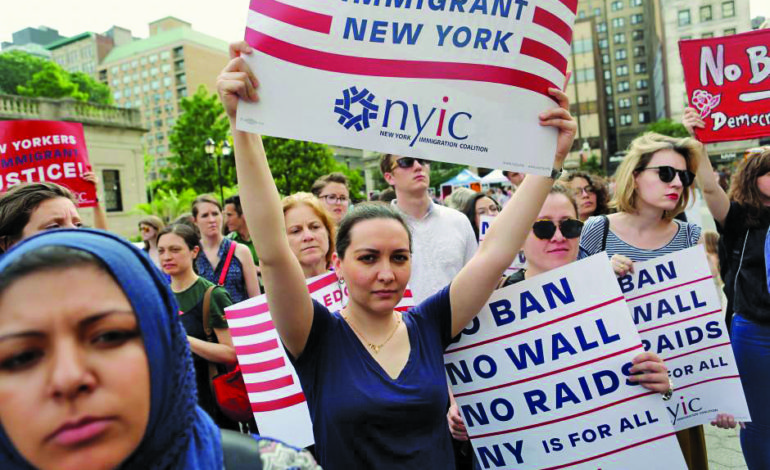 The New York Civil Liberties Union, which filed the lawsuit in Manhattan federal court, is seeking to represent a class of children in the custody of the Office of Refugee Resettlement (ORR), a federal agency, in New York. The group said there were likely at least 40 such children.

President Trump has made curbing immigration and deporting immigrants living in the United States illegally a centerpiece of his agenda.

Most children in the custody of ORR were arrested by immigration authorities after entering the country illegally without an adult. Under federal law, children with relatives or other adults in the United States who are qualified to take care of them are supposed to be released from custody while their immigration cases are adjudicated.

The lead plaintiff in the case is a 17-year-old boy, identified in the lawsuit as L.V.M. The boy came to the United States from El Salvador with his mother and brother in 2016 fleeing gang violence, and the family has applied for asylum, according to the NYCLU.

According to the lawsuit, L.V.M. was taken from his home on Long Island by U.S. Immigration and Customs Enforcement in July 2017 and detained, based on police reports that he was involved with the MS-13 gang, which the NYCLU said were false.

L.V.M. remains in ORR custody some seven months later, even though an immigration judge and a local ORR supervisor have determined that he poses no threat, the lawsuit said.

The NYCLU said L.V.M.’s prolonged detention is the result of a change in policy implemented in mid-2017 by Scott Lloyd, who was appointed to head ORR by Trump. Under the new policy, Lloyd personally signs off on nearly all decisions to reunite children in ORR custody with their families, the lawsuit said.

So far, the group said, Lloyd has approved only a “handful” of releases. Before the policy change, children would typically wait in ORR custody only one to three months.

“In a sharp break from the laws and policies intended to protect these vulnerable children, the Trump administration has vilified and targeted them,” the lawsuit said.

The NYCLU is seeking to represent a class of “all children who are or will be in the custody of ORR in New York” in secure facilities.