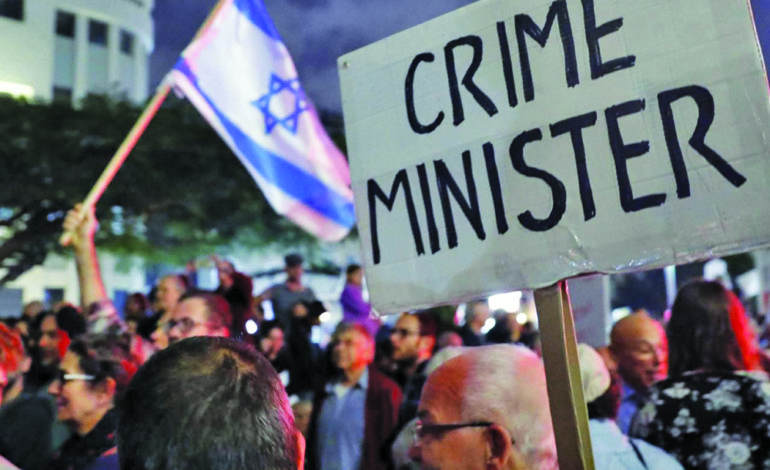 What is not normal, and should never be normalized, is that Israel is the only country in the world that continues to practice Apartheid, many years after it was disbanded in South Africa.

In an article published in Al-Monitor without a single verifiable citation, Israeli journalist Shlomi Eldar went to unprecedented lengths to divert attention from the corruption in his country.

He spoke of Palestinian journalists — all speaking on condition of anonymity — who “applauded” and “admired” Israeli media coverage of corruption scandals surrounding the country’s rightwing prime minister, Benjamin Netanyahu.

The Israeli media, which has largely supported Netanyahu’s devastating wars on Gaza, continues to relentlessly defend the illegal occupation of Palestine and to serve as a shield for Israel’s stained reputation on the international stage. It is hardly praiseworthy, even if it arguably provides decent coverage for the Netanyahu investigations.

For an Israeli journalist to handpick a few Palestinians who, allegedly, praised the war crimes-apologist Israeli media is a remarkable event that surely cannot be satisfactorily addressed in anonymity.

But Eldar’s journalism aside, one would think that seeking Palestinian admiration for Israeli media should be the least urgent question to address at this time. Others are far more pressing. For example:

Is corruption among Israel’s political elite symptomatic of greater moral and other forms of corruption that have afflicted the entire society?

And, why is it that, while Netanyahu is being indicted for bribery, no Israeli official is ever indicted for war crimes against Palestinians?

In fact, well before Netanyahu’s corruption scandals included more serious charges – for instance, quid pro quo deals in which his advisors tried to manipulate media coverage in his favor and offering high political positions in exchange for favors — it included bribes pertaining to fancy cigars and expensive drinks.

What Israelis are trying to tell us is that, despite all of its problems, Israel is a good, transparent, law-abiding and democratic society.

This is precisely why Eldar wrote his article. The outcome was a familiar act of intellectual hubris that we have grown familiar with.

Eldar even cites a supposedly former Palestinian prisoner who told Al-Monitor that, while in prison, “We learned how the democratic election process works in Israel. The prisoners adopted the system in order to elect their leadership in a totally democratic fashion, while ensuring freedom of choice.”

Others cited their favorite Israeli journalists, some of whom have served and continue to serve as mouthpieces for official Israeli hasbara (propaganda).

Many of Israel’s friends in Western governments and corporate media have also contributed to this opportunistic style of journalism; they come to the rescue when times are hard, to find ways to praise Israel and to chastise Palestinians and Arabs, even if the latter are not relevant to the discussion, whatsoever.

Who could ever forget Senator John McCain’s criticism of his country’s torture of prisoners at the height of the so-called “war on terror”? His rationale was that such a war can be won without torture, because Israel “doesn’t torture” and yet it is capable of combating “Palestinian terrorism.”

Thousands of Palestinians have been tortured and hundreds were killed under duress in Israeli prisons, the last of whom was Yaseen Omar on the day when this article was written. Moreover, according to the Palestinians Prisoners’ Club, 60 percent of Palestinian children arrested by Israel are also tortured.

If Israeli media was truly honest in its depiction of Netanyahu’s corruption, it would have made a point of highlighting the extent to which corruption goes well beyond the prime minister, his wife and a few close confidantes; but this would pierce through the entire legal, political and business establishment, rendering the system itself as rotten and corrupt.

`Instead, the heart of the discussion is relocated somewhere else entirely. In Eldar’s article, for example, he quotes the anonymous Palestinian who speaks about how Palestinians prisoners “rejected the political systems of Arab states and opted for the one they had absorbed from the ‘Israeli enemy.'”

This Israeli obsession of diverting from the discussion is an old tactic. Whenever Israel is in the dock for whatever problem it has invited upon others or itself, it immediately fashions an Arab enemy to beat down, chastise and blame.

This is also why Israelis refer to their country as, “The only democracy in the Middle East.” It is a defense mechanism to divert from the fact that Apartheid, racially-structured political systems are inherently undemocratic. So, Israel resorts to belittling its neighbors to confirm its own self-worth.

When Israel facilitated and helped carry out the Sabra and Shatila Massacre in Lebanon in September 1982, it used the same logic to defend itself against media outrage.

The then Israeli prime minister, Menachem Begin, was quoted as saying, “The goyim kill goyim and they blame the Jews.” By “they”, he meant the media.

The bottom line is always this: Israel is blameless no matter the hideousness of the act; it is superior and more civilized and, according to Eldar’s selective reporting, even Palestinians know it.

But where is the outrage by Eldar and his Israeli media champions as thousands of Black men and women are being caged in by Israeli police, ready for deportation, for committing the mortal sin of daring to escape war in their countries and seeking refuge in Israel?

How about the millions of besieged and subjugated Palestinians living a bitter existence under an inhumane military occupation?

Should not the Israeli media be targeting the very legal and political structures in their country that makes it okay to imprison a whole nation in defiance of international and human rights law?

In some strange way, corruption is one of few things that is truly normal about Israel, for it is a shared quality with every single country in the world.

What is not normal, and should never be normalized, is that Israel is the only country in the world that continues to practice Apartheid, many years after it was disbanded in South Africa.

Israeli media would rather delay that discussion indefinitely, a cowardly act that is neither admirable nor praiseworthy.