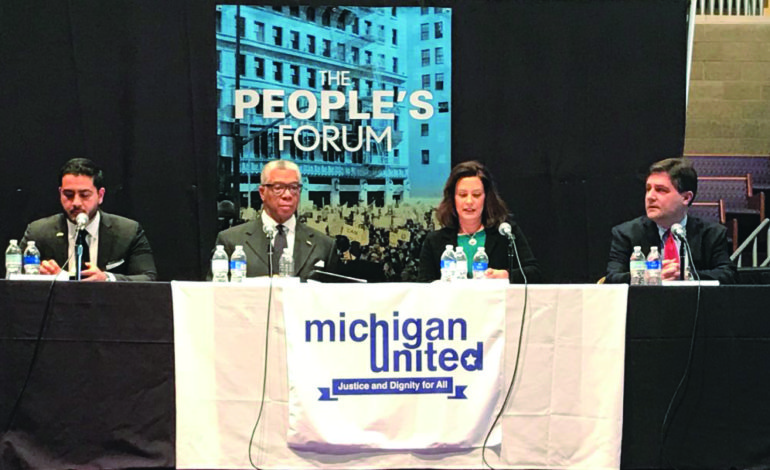 DETROIT — Thousands of people attended the sanctuary of Detroit’s Tabernacle Missionary Baptist Church on March 3 to hear from four of the gubernatorial candidates. According to Miunited.org, Democrats Bill Cobbs, Abdul El-Sayed and Gretchen Whitmer were joined by Republican Patrick Colbeck in discussions about criminal justice reform, environmental justice, education, immigration and workers’ rights at the event.

The event was moderated by Rev. Dee Dee Coleman, president of the Baptist Pastors Council of Detroit and Vicinity, and Detroit Free Press journalist Niraj Warikoo.

Here are some of the questions posed by the audience.

“What will you do as governor to reduce air pollution in overburdened communities like mine, and throughout our state?” Wendy Kyles of Detroit asked. Kyles lives in the 48217 zip code that suffers from the worst air quality in the state due to the nearby Marathon oil refinery. Her mother died from emphysema even though she never smoked a cigarette in her life.

Arthur Howard said Michigan has seen a reduction in spending on post-release services in the past few years, while states like California and Colorado are investing in programs like prison diversion and community enrichment to help former prisoners get on the right path.

“These programs pay for themselves because keeping someone out of prison saves a lot of money,” Howard said. He asked which candidates would consider a similar model in Michigan.

“A people’s governor should not treat Michigan students as commodities that can make the most profit for a management company and the authorizer,” said Jason Hackney, a teacher at one of Michigan’s 300 charter schools, who asked how each of the candidates would address the problem of fully funding our schools, whether they’d holding authorizers and management companies accountable and where they stood on the issue of privatizing the education system.