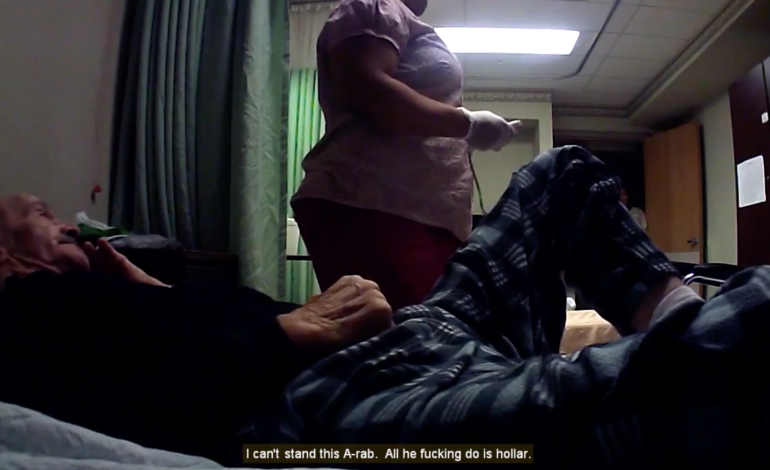 Screenshot from a video obtained from Salim Younes’ hidden camera

LIVONIA — Hussein Younes, 89, grew up in Lebanon and immigrated to the United States in the 1990s. He was a patient at Autumnwood of Livonia in 2015 until his son placed a hidden camera in his room, discovered proof of abuse and pulled him out of the facility immediately.

Salim Younes placed the camera by his father’s bedside after he noticed bruising, cuts and weight loss. The family is now suing the facility.

The suit alleged staff at the facility called Hussein Younes racial slurs, assaulted him by kicking him in the legs and restricted his access to water by removing his “call” button.

“He’s an Arab American, and because of that he was targeted at this nursing home,” Jonathan Marko, an attorney representing the family, said. “I would never put my family in this nursing home and I think the public has a right to have informed decisions when they’re caring for their loved ones. In the 10 years I’ve been doing what I’m doing in the civil rights cases and advocating for people who have been hurt this is one of the most troubling cases I’ve ever seen.”

The camera captured more than 100 incidents of neglect.

“I discovered unspeakable horrors, Salim Younes said. “What I found on these clips is something that blew my mind.”

“The actions depicted in the video are in no way illustrative of the quality care that is provided by the caring staff at Autumnwood on a daily basis,” Autumnwood officials said in a statement. A nurse prior to throwing Hussein Younes onto his bed

This opinion is not shared by the federal government. According to the Medicare.gov website, the for-profit facility contains 142 certified beds and has sub-standard care. It is also owned by a company called “Middlebelt Hope Acquisition Company Inc.”

Medicare.gov ranks nursing homes with a feature called “nursing home compare.” Autumnwood’s overall rating is “much below average”, receiving one star out of a maximum of five.

More specifically, the health inspection rating was one out of five stars, while the staffing and quality measure ratings were two out of five.

On July 20, 2017, the Bureau of Community and Health Systems (BCHS) within the Department of Licensing and Regulatory Affairs (LARA) completed “a standard and an abbreviated survey” at Autumnwood to determine the facility’s compliance with federal participation requirements for nursing homes certified by the Centers for Medicare and Medicaid Services (CMS). The survey found that the facility was not in “substantial compliance” with the CMS participation requirements, according to survey documents.

“The report details that this requirement was not met based upon interviews, observations and record reviews” is a reoccurring statement in the survey. Problems ranging from dietary needs to specific healthcare needs were detailed.

The facility failed to provide dining assistance to three of the 21 patients observed during the survey, resulting in the elderly patients experiencing weight loss and feelings of hunger.

The patient’s diet was later instructed to be downgraded to purée form to enable easier ingestion. The survey noted that during one observation in the cafeteria the staff served the food in whole form.

On July 20, 2017 at 10 a.m., surveyors met a different resident who was admitted on Nov. 16, 2012 with diagnoses that included dementia, stroke and heart failure. The report, dated May 16, 2017, noted that the resident had severe cognitive impairment and required supervision for eating. The resident was prescribed a puréed diet, a nutritional juice and health shakes with meals, according to survey documents.

At 3 p.m. that day, when informed of the resident not being assisted during the meal, the director of nursing did not respond. Throughout the three-day survey interviews, observation and a record review led to more findings by the surveyors.

“I don’t like the scrambled eggs because they are always cold,” one patient is quoted as saying in the survey.

One patient’s distress is detailed in the survey. The patient was admitted to the facility on April 19, 2017 with diagnoses that included quadriplegia (paralysis of all four limbs), stage IV pressure ulcer (wound caused by pressure reaching into muscle and bone and causing extensive damage), localized edema, anxiety and major depressive disorder.

On July 19, 2017 at 9:15 a.m., the surveyors noted the observation of wound care done by a floor nurse revealed a stage III (full thickness skin loss) pressure ulcer on the patient’s right inner thigh. It measured 0.8 cm in length by 6.6 cm in width by 0.01 cm in depth. The wound bed had yellow, necrotic (dead) tissue with intact perimeter and moderate serosanguinous (blood/body fluid mixed) drainage.

The cause of the wound had been a faulty device the staff placed between the patient’s thighs.

Thirty minutes after the incident surveyors asked why therapy staff used the device.

“It was used to separate the patient’s thighs,” the therapy director replied, according to the survey.

When asked why the device would cause a pressure ulcer, the therapy director replied, “The therapist was trialing it and it (the device) was not in good condition.”

When asked to clarify what was meant by “trialing it”, the therapy director replied, “Trying to see if it worked, but it was not care planned.”

When asked to see the device, the therapy director stated, “It was thrown out. It was not in good condition (faulty).”

Issues with the food were also discovered during the survey.

On July 18, 2017 at 8:30 a.m., the surveyors discovered roast beef with an expiration date of July 16 during the initial tour of the kitchen area with the certified dietary manager (CDM).

When the surveyors asked why the expired roast beef was there, the CDM replied, ”I don’t know why it is here; it shouldn’t be. I will throw it away.”

Autumnwood turned in “plan of correction” to LARA on July 31 in order to stay operational.

The civil case for the Younes family is unrelated to the survey, but details how the facility has operated in the past.

All employees identified in the videos have been terminated, according to Autumnwood attorneys.

The civil trial will begin on June 11 according to court documents. Marko said  his clients have no motivation to settle outside of court at this time.