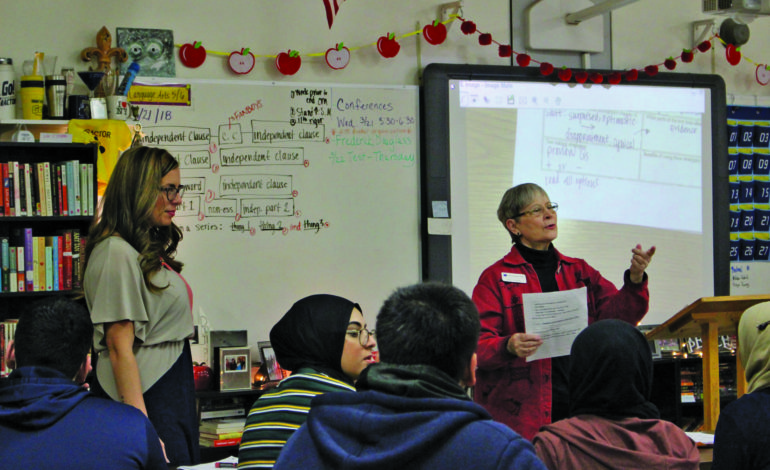 Betsy Cushman of the League of Women Voters talks with students at Fordson High School in Dearborn, March 21

DEARBORN — As part of its high school voter registration project, the League of Women Voters of Dearborn/ Dearborn Heights visited Dearborn and Fordson High Schools the week of March 19-22.

The nonpartisan political organization aims to bring awareness of the importance of informed and active participation in government through projects that increase understanding of major public policy issues.

On Wednesday, March 21, League spokeswoman Betsy Cushman, along with a few others, came to Fordson High School to discuss in a nonpartisan educational approach the process of voting and the importance of the voting practice in making the democratic process viable.

Students who are 18-years-old, or will be by November 6 (Election Day) were given applications to vote.

Cushman and her colleagues visited four classrooms in four different sessions throughout the day.

“I find the students at Fordson more engaged and interested in what is going on in the world in general, and I really appreciate that,” Cushman said in her opening remarks to the students.

Cushman, who served as president of the Dearborn/Dearborn Heights branch from 2013-2017, according to her LinkedIn profile, also said that when she gives students information, it’s not just to get them to vote.

“We really want them to know about how to find nonpartisan sources so they know what their choices are,” she said. “The most important thing we teach is to go on vote411.org so that they can see the ballot beforehand and makeup their choices.”

Asked if she sees more participation now than before the 2016 presidential election, Cushman said she did.

“Students are beginning to realize their power, especially after last week’s student walk out, for many things,” she said, “and not just the gun issue.”

She added that she had some students thanking her, which isn’t something she usually sees.

“The biggest pleasure that I really get is when students start looking at you and you can really see that they are listening because this is important – the decisions that they are making – and we really want them to vote,” she said.

In her discussion with the students, Cushman told them they have so much power they might not be aware of.

“You’re beginning to learn, but you have so much power that you can exercise and we really want you to do something,” she said.

She also talked about the importance of voting in all elections.

“People think that the president is the only thing that’s important… but, in fact, your mayor and your council – they make the decisions that affect your lives.”

The League, in cooperation with ACCESS, joined administrators from Dearborn, Crestwood, Dearborn Heights School District No. 7, Westwood School District and Divine Child High School in planning and executing the project.

In previous years, the local League has registered as many as 800 students.

In addressing the students, Cushman also explained how the League grew out of the women’s movement, specifically involving women’s suffrage – the hard-working effort to get women the right to vote.

She explained that the League was formed to educate people on the importance of the right to vote and decided not to be a partisan group. Instead, the League provides information on all the parties and groups in order to deliver a clear picture on all candidates.

In the past, the organization worked at influencing public policy through education and advocacy. The League claims to remain neutral in its approaches, where it never supports or opposes a political candidate or party. Membership is open to men and women age 16 and older.

-The AANews reporter Hassan Khalifeh contributed to this article.