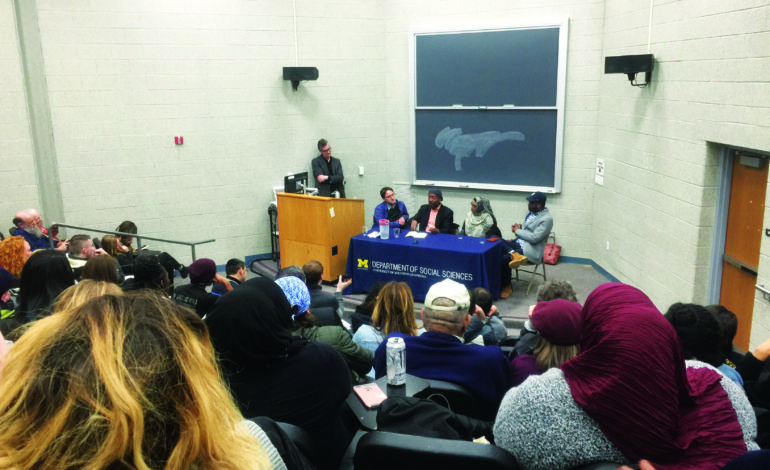 (L-R) Joshua Akers, Patrick Leary, Lester Spence, Namira Islam and Stephen Henderson speak to the audience at the University of Michigan-Dearborn forum - Photos by The AANews

DEARBORN – Students of Joshua Akers’ Introduction to Urban and Regional Studies class put together a forum on March 29 to discuss the statue of former Dearborn Mayor Orville Hubbard and to have a broader discussion of racism in and beyond Southeast Michigan.

The standing-room-only forum, which Akers moderated, was held in a lecture hall inside the Social Sciences building at the University of Michigan-Dearborn. The four-member panel consisted of Lester Spence, associate professor of political science and Africana studies at John Hopkins University; Namira Islam, a lawyer and co-founder/co-director of the Muslim Anti-Racism Collaborative (MuslimARC); Patrick Leary, associate professor of English at Wayne State University and Stephen Henderson, host of “Detroit Today” on WDET radio.

The panel began by discussing the statue’s prominent display. Located outside of the Dearborn Historical Museum, the statue of a waving Hubbard greets both museum visitors and people driving by on South Brady Street.

Last year, a plaque was placed behind the statue with one paragraph describing Hubbard’s flaws sandwiched between two paragraphs of flattery.

“A self-acknowledged segregationist,” the plaque reads in part, “he periodically gained negative national attention for comments that disparaged African Americans. Hubbard was a controversial figure who won re-election by landslide margins despite a libel judgment, a recall attempt, a grand jury investigation, a governor’s removal hearing and a federal civil rights conspiracy trial.” Spence said that it wasn’t a revelation to hear about Hubbard’s racism.

“I knew as a sixth grader Hubbard was a racist,” he said. “Racism is a political project that has the consequences of hoarding resources.”

Spence said his parents put him into Sacred Heart in Dearborn instead of the schools in their own city of Inkster because the schools in Inkster were in such bad shape.

“Individuals and actors who create cities are interested in hoarding resources and keeping them for themselves,” Spence said. “When we think about race and racism we can think about Orville Hubbard and him being a segregationist, but you have to take into account that second part [hoarding resources]. Racism reduces public support for welfare, rehabilitative methods in dealing with crime [and] reduces support for transportation across district lines.”

The question raised before the Supreme Court was whether federal courts had the authority to impose a multi-district desegregation plan on schools located outside of the Detroit area. The justices decided the courts did not have that authority and emphasized that local control over the operation of schools was important.

If the District Court ruling hadn’t been overturned, Inkster students would have been able to go to Dearborn schools. The decision made interschool busing possible within a school district, but did not make inter-district busing available.

Today, this incentive has led to Michigan having 891 school districts in 83 counties.

“Public monuments express public values,” Leary said. “Especially when they are in a public space.”

He said that when a statue is in a public space it implicitly suggests the community shares the values associated with it.

“If his [Hubbard’s] history in our present tells us anything it’s that symbolism matters quite a lot,” Leary said. “Politics were a perpetual publicity stunt to him. So questions of symbolism sort of go to the arc of what he was about and what his legacy is about.”

Islam told the audience that history is written by the winners.

“Something like a statue is part of the larger broader narrative about what is history in this country,” she said. “We have this very skewed understanding in our textbooks, in our media and art; in all kinds of different forms of representation as to who is American, who speaks for America. All these different things that erase the existence of multiple different people of color.”

She said this produces a society that is deeply undereducated about issues of race and racism. When statues of racist leaders are placed in public spaces it reinforces those ideas. She said it tells citizens these are the people we should be learning about and trying to emulate.

Henderson, who grew up in downtown Detroit, told a story about his mother teaching him how to drive in 1984, when he was 14. He said she told him to always be careful once he entered certain areas of Metro Detroit.

She’d said that because of the color of his skin, once he crossed over Alter Road heading east into Grosse Pointe (or crossing Wyoming Road on Michigan Avenue into Dearborn) he needed to be careful.

Henderson said his son is 14-years-old and he’s about to teach him how to drive.