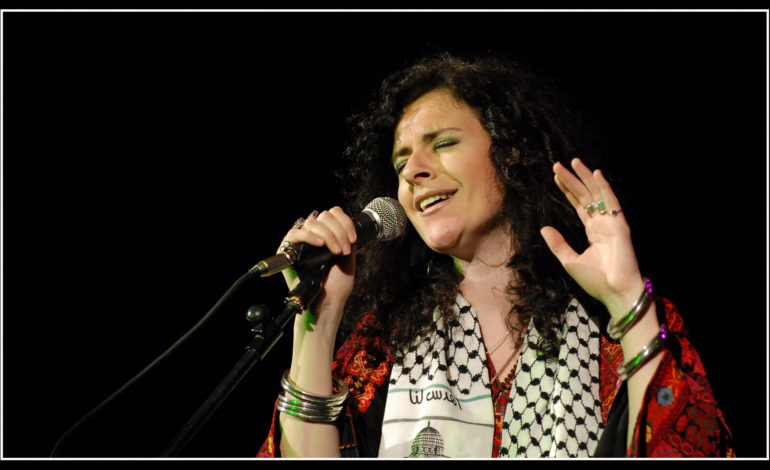 Music unites Palestinians when politicians fail. In fact, while for years the collective calls for “Palestinian unity” has gone unheeded, Palestinian music has continued to bring Palestinians closer.

Rim Banna passed away at the age of 51. Her death on March 24, after a decade-long battle with cancer, brought grief to Palestinians everywhere.

Rim, a Palestinian Christian from Nazareth, united the Palestinian people across political and geographic divides.

When she sang for the Homeland, nothing mattered but Palestine. Christians and Muslims, Fatah and Hamas, Gaza and Ramallah, all became one.

Through her soulful and warm voice, she imparted sorrow, yet celebrated life. Her songs “Fares Odeh” and “Sarah” were poetic interpretation of precious young Palestinian lives cut short by Israeli soldiers.

The butterfly will carry you to the back
of a cloud
The gazelle will run with you to a hollow
of sycamore
The scent of bread will take you,
a martyr, to the embrace of your mother
The star said to him, “Bring me to the
courtyard of my house.”
“Take me to the mattress of my slumber.”
Sleepiness climbed up my sides And settled in my head.”

Music unites Palestinians when politicians fail. In fact, while for years the collective calls for “Palestinian unity” has gone unheeded, Palestinian music has continued to bring Palestinians closer.

Deep-rooted Palestinian culture is what makes Palestinians who they are, a people with a unique and lucid identity, despite 70 years of exile, ethnic cleansing, sieges, numerous borders and wanton killings.

And when Rim sang, her voice penetrated through the seemingly impregnable Apartheid walls, checkpoints, military curfews and unbridgeable distance.

It was during the First Intifada (popular uprising) of 1987 that Rim gained access to the hearts and homes of many Palestinians; initially in Palestine and, eventually, all over the world. Her voice, soft and reassuring, gave hope to those who lived under a seven-years long relentless Israeli military campaign. Israeli tactics, then, aimed at breaking the spirit of the rebelling Palestinian people.

Rim’s music offered new, modern renditions of Palestinian traditional songs, but without erasing the historical and cultural identity of that music.

Her music belongs to the Palestinian music genre of a nationally-driven and culturally-centered art form, aimed at reintroducing — and, sometimes, reinventing — the past in a more relatable fashion.

Although a rarely publicized form of resistance, cultural resistance is at the heart of the Palestinian fight for freedom.

Italian thinker, Antonio Gramsci, who was imprisoned by fascist Italy for much of his life specifically because of his ideas on cultural resistance, had warned of how cultural hegemony is as much the enemy as outright dictatorship.

Palestinians contend with cultural hegemony, not as an academic notion, but as a daily reality.

Israel has spent decades launching and perfecting its cultural war against Palestinians, aimed at erasing Palestinian culture, on the one hand, while imposing its own cultural alternatives on the other.

Oddly, much of what Israel brands as Israeli culture is, in fact, the very Palestinian and Arab culture spanning millennia; from food, to music, to fashion and everything in between, the “Israel brand” is essentially a Palestinian, Arab brand, stolen and rebranded.

But, unlike military and political war, cultural wars are often invisible and incremental. While the Israeli government is now busy replacing Arabic street names with Hebrew ones and outlawing the commemoration of the Nakba— the destruction of the Palestinian homeland in 1947-48 — it also aims at breaking the unity of Palestinian culture altogether.

Historically, early Zionists promoted the false idea that Palestine was a land with no people and that the natives of the land were nomads, passers-by with no cultural roots, no identity, thus no collective political aspirations.

Such propaganda was essential to promote the idea of a Jewish state in Palestine. The supposed “nomads” who existed in Palestine eventually evolved to become the “refugee problem.” To this day, Zionists and their right-wing supporters still encourage the cruel idea that Palestinians are an “invented people.”

So, when Rim Banna, Reem Kelani, Mohammed Assaf and numerous others — joined by poets, artists and other Palestinian cultural warriors — celebrate the traditions, music and culture of their people, they stand at the front lines of fighting a violent Zionist discourse that has, for more than a century, been committed to the total erasure of Palestine.

In her music, Rim fought against the Israeli attempts at the cultural dispossession of the Palestinian people, while humanizing the likes of Fares, Sarah and many others.

This is why many Palestinians wept when Rim died; it is also why millions wept tears of joy when Mohammad Assaf — a refugee from Gaza — won the “Arab Idol” competition in 2013.

It was not merely because Mohammad had a beautiful voice and that he deserved to win, but because of the representation of that thundering, self-asserting voice, his lyrics and, of course, the singer himself.

Assaf is a Gazan refugee. His family was driven from historic Palestine during the violent Zionist ethnic cleansing campaign of 1947-48. He was born in shattat (diaspora) and eventually returned to Gaza, only to live under a hermetic Israeli siege. He broke the siege to participate in the competition.

When Assaf sang, millions watched in wonder as he skillfully demolished all the walls, erased the checkpoints and bridged all the distance. Suddenly, Gaza, Ramallah, Nazareth, Haifa were once more united. Those in diaspora returned. The homeland became one.

Rim too offered that multi-layered representation, which supersedes politics and geography into a realm in which the Palestinian nationhood was made of shared culture, grief, resistance, poetry and hope.

Rim has died, but the generation of artistes she patiently nurtured will continue to sing, to celebrate a culture and a civilization that cannot be tamed by guns or imprisoned by walls. Rim Banna was the voice of Palestine that can never be muted.